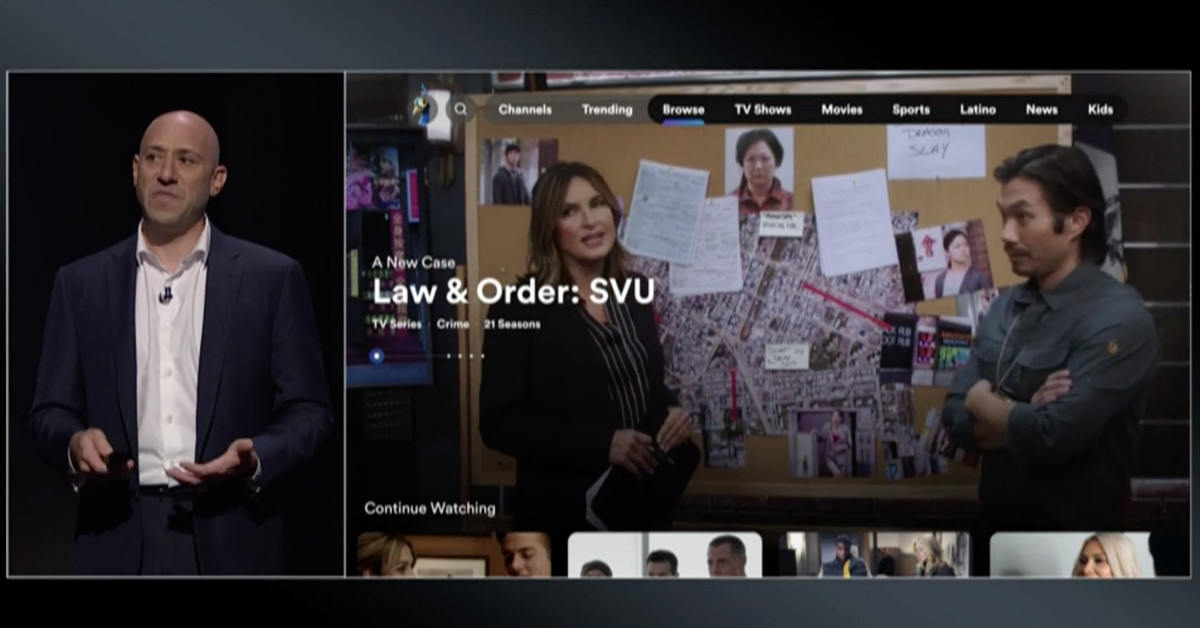 Much like competitors HBO Max and Disney+, Comcast’s streaming service, Peacock, is going to be entirely reliant on hubs.

Comcast and NBCUniversal gave an in-depth look at Peacock, which launches on July 15th and will come with three different pricing tiers, during a special investors event this afternoon at 30 Rock in New York City. There are more than 600 engineers working on the platform, according to Matt Strauss, head of Peacock. The streaming platform is based on the infrastructure that Sky in the UK has used for its own streaming options.

During the presentation, Strauss walked investors and viewers through the Peacock interface. There are three different areas that subscribers can use when they open the app: channels, trending, and browse. While people are thinking of which option they want to click on, a video will play automatically. It may be the news, or part of a game, or a show, but the idea is that “when you launch it immediately starts playing video, just like TV,” Strauss said. The first image in the gallery below shows an example from a story about Meghan Markle and Prince Harry from NBC News Now.

Once people open up browse, they’ll be able to cycle through the 15,000+ TV episodes and movies available to stream. These are broken down into a series of rows similar to Netflix and Disney+. The first two rows are based on shows that people are already watching (“Continue Watching”) and new additions to the Peacock app.

As viewing habit data is collected, machine learning algorithms will help to make titles that appear on the homepage more personalized. This is how Netflix operates and how the upcoming HBO Max app will operate as well. Emphasis will then be placed on Peacock Originals in subsequent rows, followed with recommendations for existing titles that might be of interest. Peacock will also come with a kids section, like every other streaming app, that is entering the streaming space this year.

Then there’s the trending section. Peacock will also offer short-form content on a daily basis, including sports highlights, pop culture updates, and shorter news segments. Late-night clips, for example, will have a home in this section. This includes Saturday Night Live clips that people may have missed — Strauss referred to it as the ability to get rid of the “FOMO” (fear of missing out) you might experience by missing a late-night episode right when it airs. This can help NBCUniversal pull subscribers away from YouTube, where many of these highlights already live after the live airing, and over to Peacock — if everything goes according to plan.

The third section is channels. NBC is a linear network that wants to remind people how important television is, so Peacock is designed to try to replicate the look of traditional television, Strauss says. Subscribers can pull up a channel guide to scroll through, much like we already do with cable packages now, and see what’s on. They can select from TV shows, news, sports, and movies, as well as look into specific types of content hubs. A Saturday Night Live hub, for example, will also get a “channel” look for people to browse through if they like.

These are Peacock’s three sections, but there are more product features like curation around specific shows. For instance, fans of NBC’s The Office will be able to go into that show’s dedicated hub and then select from a character like Michael or Jim and watch episodes that are centric to those characters, or are seen as some of the best. There are “beginner” options that give new viewers a chance to figure out the best episodes to watch, too. This is a type of human curation WarnerMedia is using to try to market its upcoming competitor HBO Max.

More of the Peacock interface, including a look at some of the profile avatar options that will be available, can be seen in the gallery above.

Ed Sheeran's Star Wars: Rise Of Skywalker Role Was Not What...

Why the Coronavirus Isn’t What This Canadian in Hong Kong Fears...

From Bonn to Vienna, in Search of Beethoven, the Man

Widespread Outcry in China Over Death of Coronavirus Doctor

Quibi has raised close to $2 billion, and it hasn’t even...