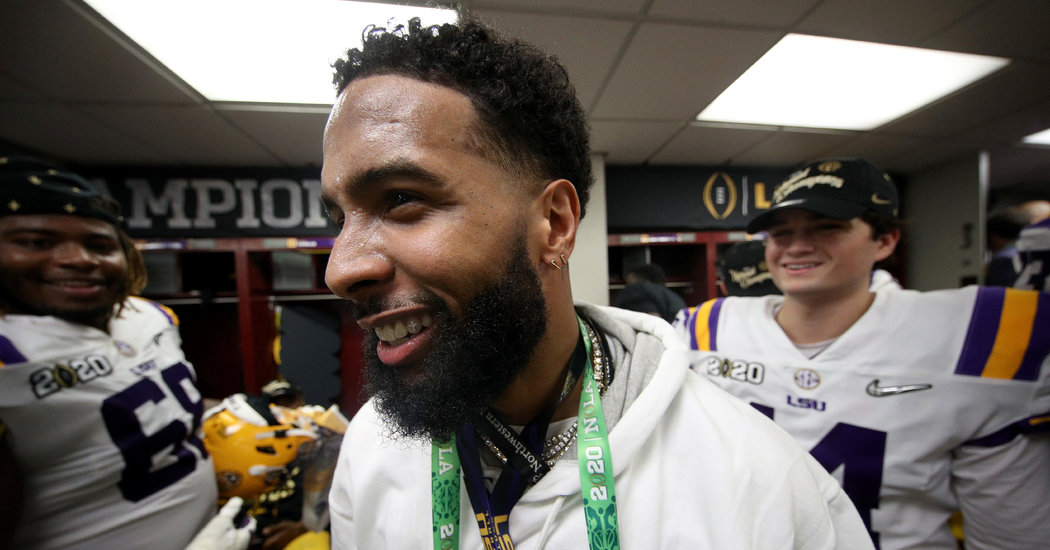 The Louisiana authorities said Thursday that a judge had approved an arrest warrant for Odell Beckham Jr., a star wide receiver for the Cleveland Browns, after he appeared to slap the buttocks of a security officer after college football’s national title game on Monday night.

A police spokeswoman in New Orleans, where Louisiana State defeated Clemson for the national championship, said Beckham had been accused of simple battery but that she could not release other details about the warrant. A court official said a copy of the warrant had not yet been made public.

In a video of the episode, which has circulated online in recent days, an officer is seen addressing Damien Lewis, an offensive guard, in the L.S.U. locker room at the Superdome. Beckham, who played for three seasons at L.S.U., then approaches the officer from behind and appears to strike him with his right hand. The officer turns to face Beckham, and the two have a limited exchange before the end of the video.

Beckham’s agent did not return a request for comment on Thursday. The Browns issued a statement on Twitter after the warrant’s issuance, saying Beckham was cooperating with the authorities “to appropriately address the situation.”

ASM Global, which manages the Superdome, referred questions to the New Orleans police but said it was conducting an internal investigation.

The warrant for simple battery, a charge that in Louisiana carries a maximum penalty of six months’ imprisonment and a $1,000 fine, is only part of the escalating fallout of Beckham’s attendance at the championship game. On Wednesday, L.S.U. said it was examining video that showed Beckham giving “apparent cash” to players after time expired, a possible breach of N.C.A.A. rules.

In that episode, Beckham was recorded, before cameras, microphones and onlookers, counting out bills and passing them to L.S.U. players. The university, which had initially believed the bills to be novelty currency, said Wednesday evening that it was coordinating with its players and regulators “in order to rectify the situation.”

“We were in contact with the N.C.A.A. and the SEC immediately upon learning of this situation in which some of our student-athletes may have been placed in a compromising position,” L.S.U. said in a statement on Wednesday.

Joe Burrow, the L.S.U. quarterback who won the Heisman Trophy last month, told the podcast “Pardon My Take” that he had received money from Beckham sometime after the game.

“I’m not a student-athlete anymore, so I can say yeah,” said Burrow, a graduate transfer whose eligibility ended with the game and who could be the top pick of the N.F.L. draft in April.

Justin Jefferson, another player who appeared to receive money from Beckham, announced Wednesday that he would enter the draft. But L.S.U. could still face some repercussions from the N.C.A.A.

When Hugs Can Kill: Mourning Nova Scotia’s Mass Shooting in a...

A €750 Billion Virus Recovery Plan Thrusts Europe Into a New...

Quieter Response to Coronavirus in Countries Where China Holds Sway

How the Promise of American Jobs Became Entangled in a Faraway...

Judge Who Pushed Graft Cases Against Ex-President of Argentina Dies

6 Items to Stuff in Your Ski Jacket Pockets