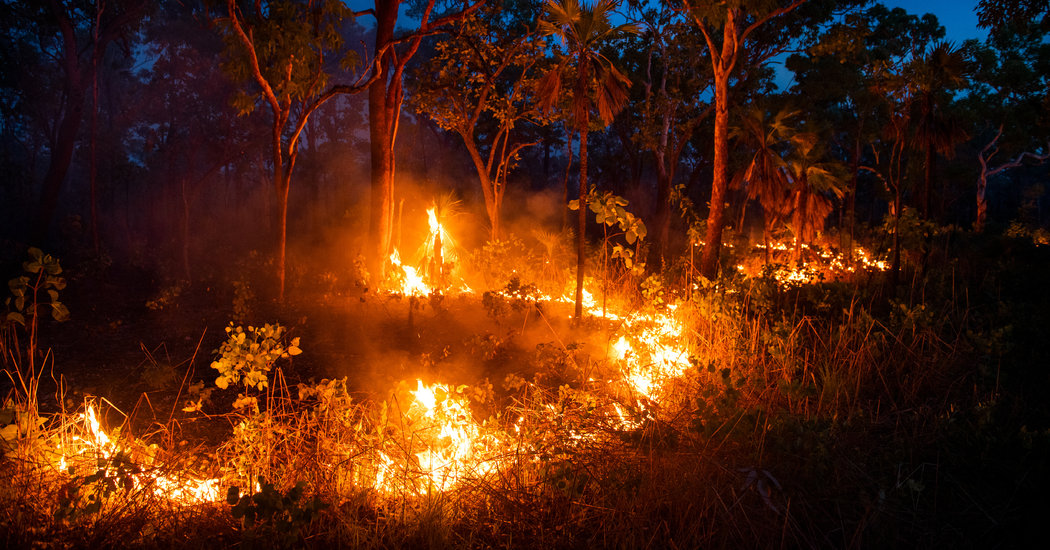 COOINDA, Australia — At a time when vast tracts of Australia are burning, Violet Lawson is never far from a match.

In the woodlands surrounding her home in the far north of the country, she lights hundreds of small fires a year — literally fighting fire with fire. These traditional Aboriginal practices, which reduce the undergrowth that can fuel bigger blazes, are attracting new attention as Australia endures disaster and confronts a fiery future.

Over the past decade, fire-prevention programs, mainly on Aboriginal lands in northern Australia, have cut destructive wildfires in half. While the efforts draw on ancient ways, they also have a thoroughly modern benefit: Organizations that practice defensive burning have earned $80 million under the country’s cap-and-trade system as they have reduced greenhouse-gas emissions from wildfires in the north by 40 percent.

These programs, which are generating important scientific data, are being held up as a model that could be adapted to save lives and homes in other regions of Australia, as well as fire-prone parts of the world as different as California and Botswana.

“Fire is our main tool,” Ms. Lawson said as she inspected a freshly burned patch where grasses had become ash but the trees around them were undamaged. “It’s part of protecting the land.”

The fire-prevention programs, which were first given government licenses in 2013, now cover an area three times the size of Portugal. Even as towns in the south burned in recent months and smoke haze blanketed Sydney and Melbourne, wildfires in northern Australia were much less severe.

“The Australian government is now starting to see the benefits of having Indigenous people look after their lands,” said Joe Morrison, one of the pioneers of the project. “Aboriginal people who have been through very difficult times are seeing their language, customs and traditional knowledge being reinvigorated and celebrated using Western science.”

In some ways, the Aboriginal methods resemble Western ones practiced around the world: One of the main goals is to reduce underbrush and other fuel that accelerates hot, damaging fires.

But the ancient approach tends to be more comprehensive. Indigenous people, using precisely timed, low-intensity fires, burn their properties the way a suburban homeowner might use a lawn mower.

Aboriginal practices have been so successful in part because of a greater cultural tolerance of fire and the smoke it generates. The country’s thinly populated north, where Aboriginal influence and traditions are much stronger than in the south, is not as hamstrung by political debates and residents’ concerns about the health effects of smoke.

The landscape and climate of northern Australia also make it more amenable to preventive burning. The wide open spaces, and the distinctive seasons — a hot dry season is followed by monsoon rains — make burning more predictable.

Yet despite these regional differences, those who have studied the Aboriginal techniques say they could be adapted in the more populated parts of the country.

“We most certainly should learn to burn Aboriginal-style,” said Bill Gammage, a professor at the Australian National University in Canberra. “Our firefighters have quite good skills in fighting fires. But for preventing them, they are well short of what Aboriginal people could do.”

Last week, Victor Cooper, a former forest ranger in northern Australia, lit a wad of shaggy bark to demonstrate the type of fire that burns at temperatures low enough to avoid damage to sensitive plants that are crucial food for animals.

The preventive fires, he said, should trickle, not rage. They must be timed according to air temperature, wind conditions and humidity, as well as the life cycles of plants. Northern Aboriginal traditions revolve around the monsoon, with land burned patch by patch as the wet season gives way to the dry.

“We don’t have a fear of fire,” said Mr. Cooper, who burns regularly around his stilt house nestled in woodlands. “We know the earlier we burn, the more protection we have.”

This year, he will become certified to join the carbon credits program. Money earned through that system has incentivized stewardship of the land and provided hundreds of jobs in Aboriginal communities, where unemployment rates are high. The funds have also financed the building of schools in underserved areas.

NASA satellite data is used to quantify the reduction in carbon emissions and do computer modeling to track fires. Modern technology also supplements the defensive burning itself: Helicopters drop thousands of incendiary devices the size of Ping-Pong balls over huge patches of territory at times of the year when the land is still damp and fires are unlikely to rage out of control.

Those taking part in the program say they are frustrated that other parts of the country have been reluctant to embrace the same types of preventive burning. The inaction is longstanding: A major federal inquiry after deadly fires more than a decade ago recommended wider adoption of Aboriginal methods.

“I have many friends in other parts of Australia who can’t get their heads around that fire is a useful tool, that not all fire is the same and that you can manage it,” said Andrew Edwards, a fire expert at Charles Darwin University in northern Australia. “It’s hard to get across to people that fire is not a bad thing.”

Nine years ago, Mr. Gammage published a book that changed the way many in Australia thought about the Australian countryside and how it has been managed since the arrival of Europeans in the late 18th century.

The book, “The Biggest Estate on Earth,” uses documents from the earliest settlers and explorers to show how the landscape had been systematically shaped by Aboriginal fire techniques.

Many forests were thinner than those that exist now and were more resistant to hot-burning fires. Early explorers described the landscape as a series of gardens, and they reported seeing near constant trails of smoke from small fires across the landscape.

As Europeans took control of the country, they banned burning. Jeremy Russell-Smith, a bushfire expert at Charles Darwin University, said this quashing of traditional fire techniques happened not only in Australia, but also in North and South America, Asia and Africa.

“The European mind-set was to be totally scared of fire,” Mr. Russell-Smith said.

As the fires rage in the south, Aboriginal people in northern Australia say they are deeply saddened at the loss of life — about 25 people have been killed and more than 2,000 homes destroyed. But they also express bewilderment that forests were allowed to grow to become so combustible.

Margaret Rawlinson, the daughter of Ms. Lawson, who does preventive burning on her property in the far north, remembers traveling a decade ago to the countryside south of Sydney and being alarmed at fields of long, desiccated grass.

“I was terrified,” Ms. Rawlinson said. “I couldn’t sleep. I said, ‘We need to go home. This place is going to go up, and it’s going to be a catastrophe.’”

The area that she visited, around the town of Nowra, has been a focal point for fires over the past few weeks.

The pioneering defensive burning programs in northern Australia came together in the 1980s and ’90s when Aboriginal groups moved back onto their native lands after having lived in settlements under the encouragement, or in some cases the order, of the government.

Depopulated for decades, the land had suffered. Huge fires were decimating species and damaging rock paintings.

“The land was out of control,” said Dean Yibarbuk, a park ranger whose Indigenous elders encouraged him to seek solutions.

The Aboriginal groups ultimately teamed up with scientists, the government of the Northern Territory and the Houston-based oil company ConocoPhillips, which was building a natural gas facility and was required to find a project that would offset its carbon emissions.

According to calculations by Mr. Edwards, wildfires in northern Australia burned 57 percent fewer acres last year than they did on average in the years from 2000 to 2010, the decade before the program started.

Mr. Yibarbuk, who is now chairman of Warddeken Land Management, one of the largest of the participating organizations, employs 150 Aboriginal rangers, part time and full time.

“We are very lucky in the north to be able to keep our traditional practices,” Mr. Yibarbuk said. “There’s a pride in going back to the country, managing it and making a difference.”

Star Wars: The High Republic – The New Book And Comic...

Coronavirus Fears Terrify and Impoverish Migrants in the Persian Gulf

NHS is building a second app based on Google and Apple's...

As Australia Burns, a Climate-Change Denier Rallies the Troops

An Australian Soap Opera Returns, With Distance (and No Kissing)