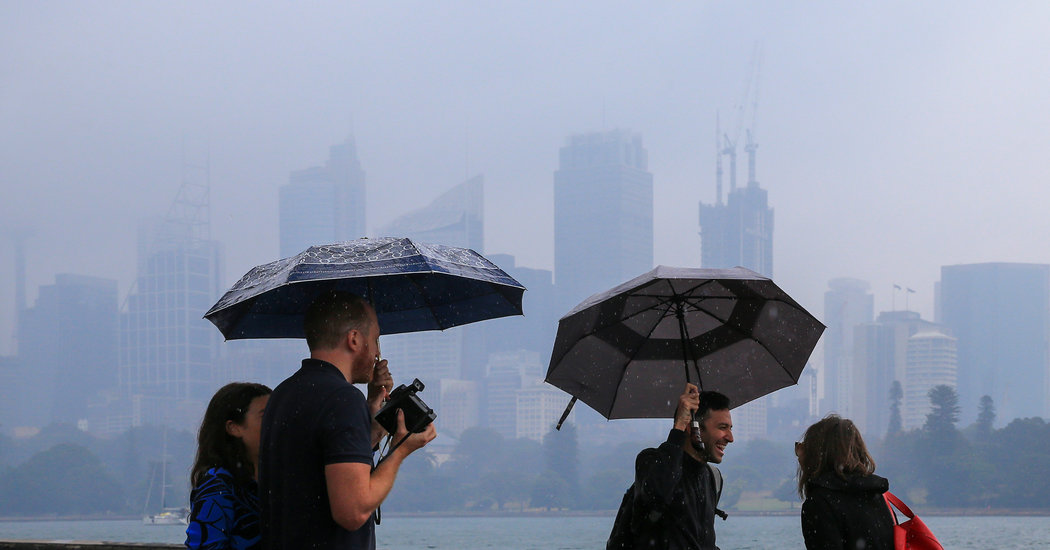 SYDNEY, Australia — Rural firefighters and farmers, as well as just about everyone in Australia’s largest city, rejoiced Friday at the arrival of something not seen for months: heavy downpours of that magnificent gift called rain.

Thunderstorms hit Sydney and a wide swath of the surrounding area, including parts of the north coast of New South Wales that have been burning for months, with more rain expected through the weekend.

“It’s a relief,” said Ray White, a group captain for volunteer fire brigades north of Sydney, where serious fires have been burning since July. “With the rain, we’ve pretty well got all the fires here contained at the moment, mate. Hopefully they’ll be looking to go out in the not too distant future.”

The amount of rain varied wildly on Friday, from a few drops to more than four inches. It was not enough to end the country’s bush-fire crisis — dozens of fires farther south are still out of control.

But for one gray and drenching moment, or a few hours in some places, strong rain doused the deadly flames. And the dried-out gardens. And the filthy streets.

For many, the excitement could not be contained.

Cows and humans jumped for joy in puddles, while others shared scenes of city life, like beads of rain on window screens, that only the fire-and-drought-tortured could see as beautiful.

The soggy weather — “best day of the year,” said one sports commentator — delivered quite a jolt. Much of Sydney received more rain on Friday than it had over the past three months. A few smaller towns to the northwest welcomed more precipitation than they had seen in entire recent years.

But while the downpours were greeted warmly, they also caused problems. Sydney suffered train cancellations and heavy traffic. The hardened, dry ground in more rural areas could not handle the largess, leading to flash floods in some places.

In a battle of extremes, the historic wildfires made the storms more dangerous. Fire officials warned of “widow makers” — burned-out trees that collapse with precipitation.

The rain also threatened the water supply in many areas as ash and debris washed off into reservoirs. At the Warragamba Dam, whose reservoir provides 80 percent of the water for Sydney, booms and filters have been set up to try to keep the contaminants from reaching treatment plants.

“There are barriers floating on the water and beneath the water at significant inflow points,” said Tony Webber, a spokesman for WaterNSW. “It’s not a panacea, but it’s part of a broad response to maintain water quality.”

Meteorologists and fire officials, like water officials, were quick to warn against viewing the storms as a cure for the country’s fire problem. Several large fires in Victoria “remain very active and unpredictable,” state fire officials said.

In New South Wales, areas near the Snowy Mountains, where fires are still burning and smoldering, have received little if any rain. The same was true for some coastal towns.

“Northern New South Wales fires have been impacted the most,” said Jonty Bruce, a spokesman for the Rural Firefighting Service. “Many of them have been put out. And as you move further down to the southern part of the state, it lessens.”

“There continues to be a threat,” he added. “There’s plenty of fire on the ground.”

Climate change deniers — including a federal lawmaker, Craig Kelly — still seized on the rain as evidence that people had been engaged in “climate alarmism.” On his Facebook page, Mr. Kelly noted that the government’s Bureau of Meteorology had predicted that heavy rain might not appear until March or April, after the end of summer.

But scientists have long dismissed such claims, which confuse isolated weather patterns with long-term climate trends. Last year, Australia experienced its hottest and driest year on record. One day of rain does not erase decades of data predicting that Australia’s fire seasons would do exactly what they have done this year — become longer and more intense.

“Weather is what we get, day to day, and this varies in the short term,” says an explanation from Australia’s Climate Council. “Climate is the long-term average of the weather patterns we experience, usually taken over 30 years or longer.”

Some Australians, however, hoped that even the partisan climate debate might be dampened by the rain. Most of all, they hoped for more of the good stuff.

“In the last few days, we have had very little,” said Brett Hosking, 46, a farmer in northern Victoria. “We are living on a Bureau of Meteorology promise that it will come in this Sunday.”

Even in the places getting wet on Friday, the message to the heavens was clear: Keep going.

“It’s not going to help the drought much, mate,” said Mr. White, the firefighter north of Sydney. “It’s just a start.

Christo, Artist Who Wrapped and Festooned on an Epic Scale, Dies at 84

Student Activist in Australia Is Suspended After China Protests

Where Have 140 Million Dutch Tulips Gone? Crushed by the Coronavirus

Why Coronavirus Conspiracy Theories Flourish. And Why It Matters.

To Survive, Venezuela’s Leader Gives Up Decades of Control Over Oil

Finland, ‘Prepper Nation of the Nordics,’ Isn’t Worried About Masks