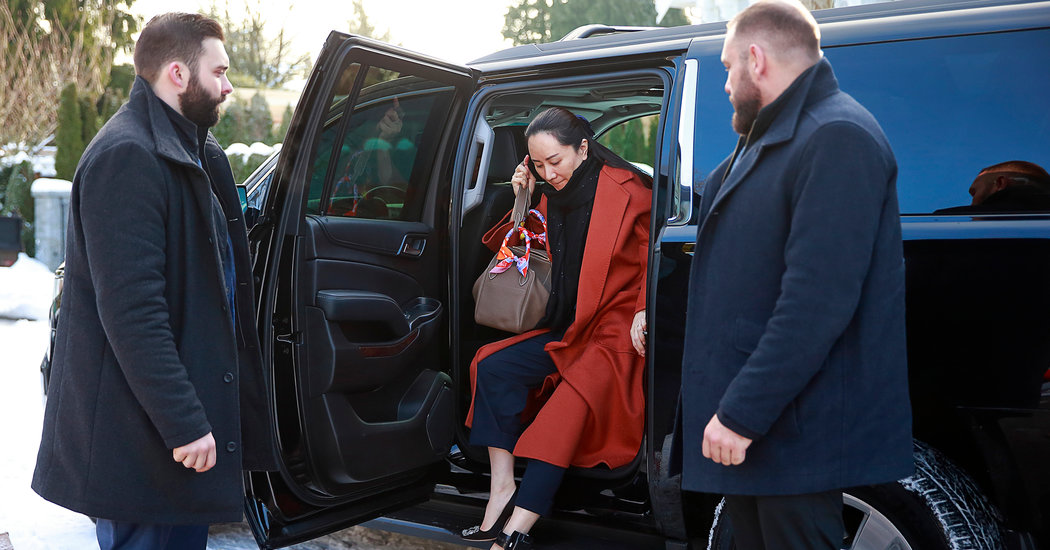 VANCOUVER, British Columbia — She has passed her days painting flowers, conferring with her lawyers, reading books and improving her English, ensconced in two different multimillion-dollar mansions in exclusive sections of Vancouver.

But on Friday, after the city experienced a rare snowstorm, Meng Wanzhou, the Huawei chief financial officer detained in Vancouver and awaiting an extradition hearing on fraud charges, could be seen playfully throwing a snowball outside her house.

Then she spotted a photographer. Her smile turned into a frown.

In the 13 months since Ms. Meng, 47, was arrested at the Vancouver airport, her life has been circumscribed by the terms of her $10 million bail. On Monday, it entered a new phase when her extradition hearing formally began.

This part of the hearing, which could last a week, will examine whether the crime Ms. Meng is accused of constitutes a crime in Canada, a prerequisite under Canadian law for her extradition to proceed. This is known as the legal concept of “double criminality.”

The United States, in a January 2019 indictment, charged, among other things, that Ms. Meng had deceived four banks into clearing transactions in Iran through Skycom, a subsidiary, violating American sanctions against Iran.

Prosecutors say Ms. Meng lied to representatives of the bank HSBC in 2013 about Huawei’s relationship with Skycom, telling them it was a partner when it was, in fact, a subsidiary. That put HSBC at risk of sanctions.

On Monday, at the beginning of the proceedings, Richard Peck, a member of Ms. Meng’s defense team, said the case should be dismissed because it was founded on the accusation of breach of United States sanctions against Iran — sanctions that Canada does not accept. The claim of fraud, he said, was “a facade.”

In the courtroom, Ms. Meng, sitting in a bulletproof defendant’s box at the back of the court, appeared composed and smiling as she conferred with her legal team.

If her case goes ahead, the court will also hear her lawyers’ arguments that her rights were violated when she was arrested.

Ms. Meng’s arrest has pushed Canada into the center of a tense diplomatic battle between China and the United States. President Trump once said he might consider interceding in the case if that helped him reach a trade deal with China.

In what many called a retaliation for the arrest of Ms. Meng — one of China’s most prominent business executives — China has arrested two Canadians, accused them of espionage, and detained them in secret jails, deprived of access to lawyers and their families.

It is unclear when a final ruling in Ms. Meng’s extradition case will be made. In the meantime, she could face many more months in Vancouver.

Vincent Pang, a Huawei board member and longtime friend of Ms. Meng’s, visits her about once a month. He said in an interview on Friday that he and the company “believe she is innocent, and so does she.”

Nevertheless, Mr. Pang said, Ms. Meng is facing enormous emotional stress because of the uncertainty about her future and from being separated for long periods from her four children, all of whom live in China.

He said her two youngest children were in Vancouver schools at the time of her arrest, which upended their lives. “She feels sorry for her family,” Mr. Pang said.

According to one of the security guards monitoring her house, her family came to see her during the Christmas holidays. Her mother and husband have taken turns keeping her company.

Under the terms of her bail, she is able to travel relatively freely about the city, although she has an 11 p.m. curfew and a GPS tracker around her ankle. Her bail conditions, which give her the freedom to go shopping are in stark contrast with the two Canadians detained in China, and have been criticized in Canada.

But she seldom leaves the house, said one of two unarmed guards, who was standing near a makeshift tent outside Ms. Meng’s mansion on Friday. When she does, he said, it is usually to meet with her lawyers.

Mr. Pang said that while Ms. Meng lived in a mansion, it was, effectively, a gilded cage. He said she had lost a lot of weight.

“It’s not about how big her home is but what’s in her heart,” he said, adding, “She feels trapped.”

Despite entreaties by him and others friends to go out more, Ms. Meng prefers to stay at home, Mr. Pang said. “If you’re detained, you don’t feel like shopping or eating,” he said.

Still, on one occasion, Ms. Meng was spotted browsing at Holt Renfrew, the luxury retailer. And on China’s National Day, she wore a bright red Gucci dress to court, adorned with an enamel Chinese flag pin.

Ms. Meng has hired an A-list legal team led by David Martin, one of Canada’s most high-powered lawyers, who specializes in white-collar crime. He has argued cases at the country’s Supreme Court and has defended members of foreign governments and ultrarich captains of industry seeking to avoid extradition.

While Ms. Meng retains her chief financial officer title at Huawei and continues to take a role in the business, Mr. Pang said her responsibilities had been significantly scaled back, given that Shenzhen, where Huawei has its headquarters, is 16 hours ahead of Vancouver.

In December, on the first anniversary of her arrest, Ms. Meng wrote a reflective letter, published on Huawei’s website, in which she said she had experienced moments of “fear,” “pain” and “disappointment” — but also acceptance.

“When I was in Shenzhen, time used to pass by very quickly,” she wrote. She continued, “Right now, time seems to pass slowly.”

After the letter was released, there was a backlash on social media against Huawei and sly allusions to the story of a former company employee, Li Hongyuan, who was jailed for more than eight months after he demanded severance pay when his contract wasn’t renewed. Mr. Li was eventually released with no charges, but some compared his detainment with Ms. Meng’s luxurious surroundings.

In recent interviews with international news outlets, Ms. Meng’s father, Ren Zhengfei, who is Huawei’s billionaire founder, suggested that her detention has brought the two closer together.

Before her arrest, Mr. Ren said, Ms. Meng rarely called or texted him. Now the two speak regularly by phone.

When Mr. Ren turned 75 in October, Ms. Meng posted a handwritten birthday greeting on social media. The post included a photo of her standing outdoors wearing her ankle monitor. The letter was signed “Piggy” — a nickname apparently given to her when she was a chubby child.

Given that Ms. Meng is wanted by the United States on fraud charges, the irony has not gone unnoticed among local residents in her neighborhood that her 8,047-square-foot house is just a few doors down from the residence of the United States consul general, where an American flag flaps in the wind.

A short walk away is the hulking Consulate General of the People’s Republic of China.

Ji Jiahao, 22, came to Vancouver from Shanghai to study English and lives in a mansion on the same street as Ms. Meng. He said Ms. Meng had not broken any laws and should be released.

“Canada has always been the little brother of United States,” he said. “It does whatever the United States does.”

Hayden Rubensohn, a doctor who works in the area, said Ms. Meng’s bail conditions showed that Canada was a humane country. But he said they did spur some resentment in a city with a vast economic gaps.

“It’s hard for people to see foreigners living with so much wealth,” he said, “when people in Vancouver are struggling to make ends meet.”

Formula One Opener Canceled as Coronavirus Casts Shadow Over Season

Five Places to Visit in Amman with a Hometown Fashion Designer

An Olympic Doctor Discusses the Effect of the Coronavirus on Sports

Economic Crisis Prompts a Showdown, and a Shutdown, in Suriname

What Happens When the U.S. Outsources Asylum?