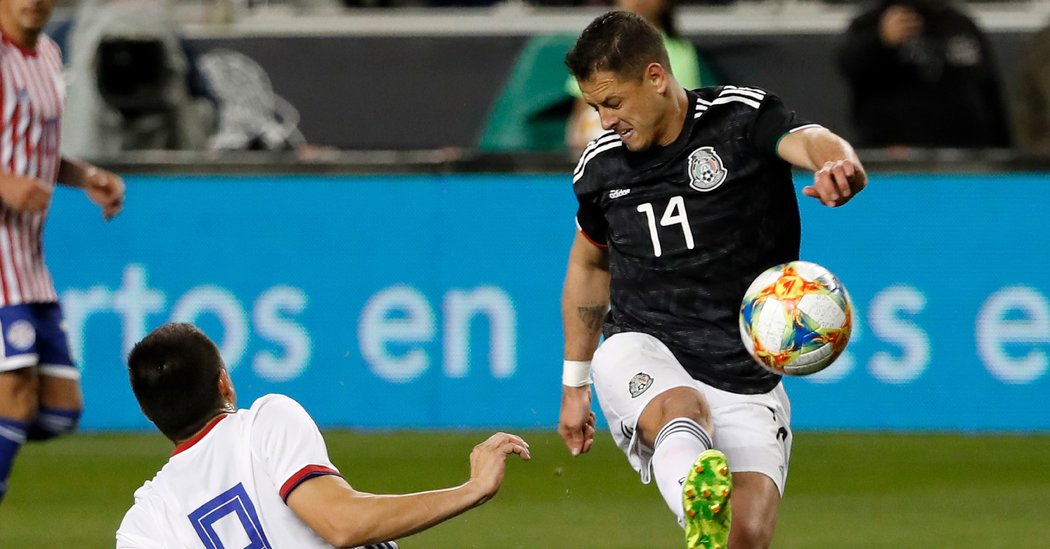 Javier Hernández, a high-scoring Mexican striker who had been rumored to be heading to Major League Soccer for years, finally arrived in the league on Tuesday.

The Los Angeles Galaxy, who lost the scoring and outsize personality of striker Zlatan Ibrahimovic when his contract expired after last season, announced Tuesday that they had replaced him with Hernández, 31, a popular forward who has played at Manchester United and Real Madrid and remains a fixture on Mexico’s national team.

Hernández will earn about $6 million a year for three years, making him the highest-paid player in M.L.S., said a person with knowledge of the signing. He joins the Galaxy from Sevilla in the Spanish first division, where he moved this season after two years at West Ham United in England’s Premier League.

Hernández, who is known as Chicharito, or Little Pea, is a hero to fans of the Mexican national team. The son and grandson of former Mexico players, the baby-faced Hernández is the national team’s career goals leader and its most popular drawing card.

He played most recently for Sevilla, but he struggled to make an impact, scoring only once in nine league appearances.

“People are going to say it was because I couldn’t make it, but sometimes in football there are things that are not in your hands,” Hernández told The Los Angeles Times. “The last two years, the managers decided on giving confidence to other players rather than me.”

A big-name veteran player coming to M.L.S. — and to the Galaxy, in particular — is nothing new, of course. In the years before Ibrahimovic arrived in 2018, the star-hungry Galaxy employed 30-something stars like Robbie Keane and Landon Donovan (who both had won the league’s Most Valuable Player Award) and Steven Gerrard and Ashley Cole (whose tenures were far less memorable).

The team was also the landing spot for the biggest M.L.S. signing of them all: David Beckham, who suited up from 2007 to 2012.

The league will be hoping Hernández will have the same effect that Beckham, and to a lesser degree Ibrahimovic, had on everything from ticket sales to fan engagement to, perhaps most important, sponsorship opportunities and television ratings.

Ibrahimovic was a scoring success in M.L.S., collecting 52 goals in 56 games, though the Galaxy won only a single playoff game in his two seasons in Los Angeles. One of Hernández’s assignments will be to restore the Galaxy’s pre-eminence in a nascent city rivalry with Los Angeles F.C., which posted the league’s best record last season behind another Mexican star, Carlos Vela, and then knocked the Galaxy out of the postseason.

Hernández’s success as a drawing card with Mexico is surely not lost on the Galaxy and M.L.S., which controls the Mexican team’s marketing rights through a subsidiary, Soccer United Marketing.

Mexican-Americans make up a significant part of the United States soccer audience, but have not fully embraced the American league. In the United States, television ratings for broadcasts of Mexico’s top league, Liga MX, routinely surpass not only those for M.L.S. but also for the Premier League and other European leagues.

Mexico draws large crowds whenever it plays in the United States, however, and the presence of Hernández, probably the most popular player on the team, on any American field can lead to a notable increase in ticket sales and television ratings.

When he signed with Manchester United in the summer of 2010, for example, the move came just before the club was to play a team of M.L.S. players in the league’s annual all-star game in Houston. The mere prospect that Hernández might make his United debut in the match helped sell more than 20,000 tickets in the weeks before the game.

On game day, more than 70,000 fans turned up, and Hernández scored a goal.

M.L.S. and the Galaxy are believed to have paid a transfer fee of almost $10 million to acquire Hernández from Sevilla, which will turn a seven-figure profit on its brief relationship with the forward. While Hernández is the highest-profile player to join M.L.S. in the current off-season, he is not alone in having a connection to Mexico and Mexican fans.

At least nine players have made the move from Liga MX to M.L.S. in the current off-season, including Mexico’s Alan Pulido (Sporting Kansas City), the Argentine midfielder Lucas Zelarayán (Columbus) and the Peruvian international Edison Flores (D.C. United).

For an American Journeyman, a Long-Delayed Honor in Japan

8 Americans Were Hurt in Iranian Strike, Military Says, Despite Trump...

Daisy Lucidi, a Radio Voice With a Telenovela Following, Dies at...

She Hid From the Mafia for Decades. Now She Helps People...

Student Suspended Over Dreadlocks Is Invited to the Oscars by ‘Hair...

Uphill Skiing at 75: ‘There’s No One Left in My Category’