When the legendary American decorator Mario Buatta went to the auction of Andy Warhol’s possessions at Sotheby’s after the artist’s death in 1988, he was in awe. “I want an auction like this,” he confided to a close friend. Buatta himself died in October last year, and now Sotheby’s New York is auctioning off all of his beloved belongings, 922 lots in total, in a highly-anticipated sale.

Arguably the most famous American decorator in the 1980s and 1990s, Buatta was famously known as the Prince of Chintz due to his unapologetic passion for all things pretty. Largely self-taught, Staten-Island-born Buatta was a keen Anglophile, particularly fond of the comfortable, relaxed, old world English country house look created by celebrated Anglo-American decorator Nancy Lancaster and her business partner John Fowler. A trip to London in the early 1960s was pivotal for him. He visited Lancaster’s then radical double-height yellow living room in Mayfair (“buttah yeller”, as she called it in her native Virginia drawl), and formed a friendship with Fowler that saw him spending Christmases at Fowler’s Hampshire Hunting Lodge until the end of the latter’s life.

From the archive: Nancy Lancaster’s apartment in Mayfair (1960)

Back in the US, Buatta interpreted the British country house look for Americans in the 1980s and 1990s, when the popularity of Charles and Diana’s fairytale wedding and the iconic TV adaptation of Brideshead Revisited made upper-class England a fashionable reference. His passion for colour, antiques, and pattern on pattern was part of the zeitgeist, and he carried it off with distinctive flair. London designer Jane Churchill described Buatta as “master of the hunt–the way he hung china, pictures, and arranged everything–he had the most fantastic eye for scale.” He loved bright colour, favouring cheerful hues like watermelon, pistachio and apricot, and had an exuberant personality to match. An inveterate prankster, he was frequently accompanied in society by his pet plastic cockroach, Harold.

The ‘Prince of Interiors’ sale marks the first time all of Buatta’s possessions will be seen together under one roof. A voracious collector, Buatta kept his beloved objects piled high collecting dust (or what he called ‘a protective coating’) in his Manhattan apartment, Connecticut country house and five storage units. He kept fine china in the fridge; a rug he bought from American decorator Sister Parish stayed rolled up in his living room for 35 years and an octagonal dining table was used maybe twice, if at all. 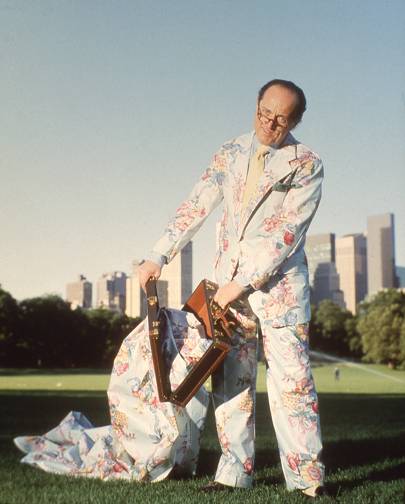 COURTESY: THE ESTATE OF MARIO BUATTA

A few of the things going on the block: objects from all four of Nancy Lancaster’s English homes, a bed made for Prince Albert that originally came from the Brighton Pavilion, an 18th-century chinoiserie screen that Buatta would hide behind in order to eavesdrop on prospective clients chatting in his living room, a litter of dog portraits, the blue silk sash bows from which the portraits were suspended, a red Japanese bureau cabinet that travelled with Buatta to all of his apartments, and myriad antique porcelain, furniture, enamel boxes and pictures. “Objects were like lovers to him”, said Emily Eerdmans, his biographer. “He was not emotionally able to do this sale during his lifetime, he wouldn’t have been able to see the dog paintings come off his wall.”

As the auction nears – the question is inevitable – what will become of his much-loved pieces? There is no question they’re in demand. The young antiques consultant Michael Diaz-Griffith was in attendance at the exhibition preview: “Several major, well-known collectors who don’t buy much anymore were sharpening their claws at the preview, and I thought, ‘Oh, my gosh, I’m obviously outbid.'” The collector Pat Altschul agrees: “Because of his superb taste, I encourage lovers of beautiful objects to buy a small treasure from Mario’s collection. I don’t know that an opportunity like this will ever come around again.”

Jane Churchill, great niece of Nancy Lancaster, who flew over from London to speak at a Sotheby’s panel before the sale, jokingly asked the audience to keep their hands off of her great aunt’s Venetian mirrors. Old friends of Buatta, like New York designer Charlotte Moss, are poised with chequebook at the ready. “My husband asked me what I wanted for Christmas and I said ‘the Mario Buatta sale in January’. He has no idea what he’s in for–the sale is going to make a vintage Porsche look like a stocking filler.”

How to decorate with chintz

As well as the old guard, the auction has sparked interest from the new guard. “I’m obsessed with this sale,” said London designer John Tanner. “I think the younger generation, myself included, are inspired by the English country house style of decorators like Buatta and John Fowler because of what Fowler described best as their undecorated look of romantic disrepair”. Salvesen Graham’s Mary Graham and Nicole Salvesen agree: “The look never left; for us it always comes down to designing for how we live. Here in England that hasn’t really changed – people want to be comfortably surrounded by beautiful things.”

His taste was timeless. “I think it even appeals to millennials,” said Eerdmans. “It’s- quirky, it’s eccentric, it’s joyful. His whole philosophy is that a room should look like it’s been added to over time, it should be imbued with the personality of the owner. It’s not about a hotel room that’s perfect. Having a space that can grow with you, and reflect you is very millennial.” But there’s no denying the world has moved on to some extent. “I do think that we’re in a moment again, as there’s a resurgence of interest in antiques,” explains Diaz-Griffith. “But I don’t think that the same categories that fetched the highest prices in the 1980s and 1990s are going to be the categories that fetch the highest prices now. I think that the most interesting, weirdest, most colourful and quirky examples, in general, will have the most success on the market for the foreseeable future. There’s no social pressure to have the best Newport table in your Park Avenue apartment anymore.”

Says Tanner, ” ‘once in a lifetime’ is a bit of a cliché, but with over 900 lots of such quality you are really able to look inside the mind of this great decorator. Peeling back the layers you find a very complex man, but a man who had an undeniable eye for beauty.” Dallas-based designer Michelle Nussbaumer, well-known for her own layered aesthetic, sums up what the consistent view appears to be “There’s hardly anything I don’t want. I think the Prince of Chintz would be tickled pink to see so many generations fighting over his treasures.”

Mario Buatta: Prince of Interiors opens at Sotheby’s New York on January 23, with the live auction beginning at 3pm GMT.

Read Christopher Lloyd's words on Derek Jarman and Prospect Cottage, ahead of a new exhibition at The Garden Museum

After Months of Denial, Russia Admits the Virus Is Taking Hold

How to bulk delete comments and block several users on Instagram

Europe, Overrun by Foreign Tech Giants, Wants to Grow Its Own

Sweaty Scrums? How Rugby May Adapt to Return to Play

A furniture designer and a writer embark on a new life...