WUHAN, China — The authorities drastically expanded a travel lockdown in central China on Thursday, essentially penning in 20 million residents to contain a deadly virus that is overwhelming hospitals and fueling fears of a pandemic.

The new limits — abruptly decreed ahead of the Lunar New Year holiday, China’s busiest travel season — were an extraordinary step that underscored the ruling Communist Party’s deepening fears about the outbreak of a little understood coronavirus. It has killed at least 18 people in China and sickened more than 600 in at least seven countries, including the United States, according to statistics from health officials.

Even as the Chinese authorities imposed the new restrictions — blocking expressways, cutting flights and warning residents to stay put — experts warned that the country risked a repeat of the SARS epidemic, which broke out in China in late 2002 and spread for months while officials played down its severity.

The World Health Organization’s emergency committee, meeting in Geneva on Thursday for the second consecutive day, said it was too early to declare an international health emergency though it would reconvene in 10 days or less to reassess the outbreak.

But in Wuhan, the Hubei provincial capital of 11 million where the outbreak began, anxiety and anger prevailed as worried residents crowded into hospitals and teams of medical workers in hazmat suits sought to identify the infected.

“They can’t take proper care of all the people here,” said Sun Ansheng, a man in his 50s who was waiting outside a hospital while his wife was tested for the coronavirus, so named because of the spiky halo around the microorganism.

“The city government told us there was a virus, but they didn’t explain enough what we should do,” Mr. Sun said. “They left it sounding too minor. Now look.” 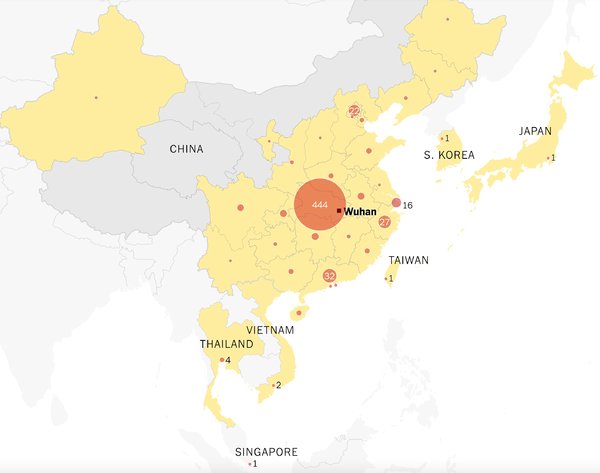 Maps: Where the Wuhan Coronavirus Has Spread

The virus has sickened hundreds of people in Asia and at least one person in the United States.

The images in Wuhan offered a jarring contrast to the attempts by Chinese leaders in Beijing to project confident composure. President Xi Jinping led a toast in an ornate hall in Beijing to the Lunar New Year, which begins on Saturday, and he did not mention the crisis in his remarks to the cheerful crowd of officials and guests.

Even so, a sense of anxiety was deepening across China, with hospitals scrambling to cope with an influx of possibly infected patients and people lashing out online at the government. In Beijing, officials announced that they would temporarily close the Forbidden City.

On Thursday morning, the authorities imposed a travel lockdown in Wuhan, the industrial city at the epicenter of the outbreak. Airlines canceled hundreds of flights to Wuhan, leaving thousands of people stranded. Later in the day, officials said they would also halt public transportation in the nearby cities of Huanggang, Ezhou, Zhijiang and Chibi, which are together home to more than nine million residents.

Some residents in Wuhan spoke speculatively of trying to skirt the blockade by driving on rural back roads to evade police checkpoints.

“It’s serious, but not that serious,” said Wang Mengkai, a worker in an electronics parts factory who was stuck at the Wuhan Railway Station, hoping to figure out a way to join his family in Henan Province for the Lunar New Year celebrations. “If we can’t get out on a train, we’ll try putting together a car with a driver,” he said.

Anger and frustration spread among Wuhan residents lined up at hospitals seeking diagnosis and treatment for coughs and fevers. Most residents interviewed said they could see the logic of travel restrictions. But many accused officials of having failed to ensure that enough medical workers were properly trained, while medical workers reported shortfalls of critical protective gear such as masks and goggles.

“I’m willing to accept that we have to stay in Wuhan, O.K., but the medical care needs to keep up,” said Yang Lin, 28, who had come seeking treatment for what she described as a cold. “You shouldn’t tell us we can’t leave, and then give us second-rate medical care. That’s unfair.”

Several residents said they had gone from hospital to hospital and lined up for hours, only to be sent home with medicine and instructions to seek further treatment if symptoms persisted.

Doctors told some patients of insufficient hospital beds and testing kits. Some residents worry officials are underreporting the number of people ill with the virus, although the government has warned of dire consequences for those who hide or delay reporting cases.

“The government did not fulfill its duty,” Du Hanrong, 56, a retiree, said by telephone. “They just are doing things hastily and carelessly.”

The Wuhan city government acknowledged that crowds were forming at hospitals, and it came under intensifying criticism from scientists and the public, who described the response as too little, too late.

Experts said that the mass travel restrictions, while understandable, would do little to stop the spread of the virus outside China, as many infected people had already left Wuhan.

“The horse is already out of the barn,” said Dr. W. Ian Lipkin, an epidemiologist at the Mailman School of Public Health at Columbia University, who had assisted the Chinese authorities in the response to SARS.

In an unusually blunt rebuke, Dr. Guan Yi, a prominent Hong Kong scientist who also assisted in the SARS crisis, said officials had obstructed his efforts to investigate the outbreak during a trip to Wuhan this week.

“I consider myself a veteran in battles,” he said in an interview published Thursday by the influential magazine Caixin, citing his experience with bird flu, SARS, and other outbreaks. “But with this Wuhan pneumonia, I feel extremely powerless.”

On Thursday, in what experts described as a somewhat reassuring sign, the Chinese authorities released details about the 18 people who have died in the outbreak, showing that the disease has so far largely killed older men, many with underlying health problems. But the 18th victim was the first to have died hundreds of miles from the Wuhan epicenter, punctuating the risk of fatal cases far from where the virus was first reported.

Experts said the severity of the outbreak would depend on whether other epicenters develop, as happened during the SARS crisis. But they acknowledged that much remains unknown, including how easily the new virus spreads between people.

Wuhan sits astride the mighty Yangtze River, and the restaurants and hotels along its banks — usually busy in the holiday season — were mostly shut. Retail streets were desolate, and the roads were often eerily empty.

But cars crowded around seven hospitals across Wuhan that have been designated as reception points for residents with high fevers that may have been caused by the new coronavirus. Some people waiting outside clinics in a drizzly rain said that their family members had lined up for much of the day to be checked by a doctor.

After SARS broke out nearly 20 years ago, the Chinese government took steps to improve its public health system, including monitoring infectious diseases. But the lingering public distrust created by cover-ups of SARS and other health threats appears to have undercut those achievements.

Dali Yang, a professor of political science at the University of Chicago, said that while the current response has benefited from China’s improved technical capabilities since the SARS crisis, “what I find astounding was how the Wuhan authorities consistently downplayed the seriousness of the situation.”

The lessons from SARS, he said in an email, were “that it’s important to let the public know and get the public to modify their behavior.”

Still, China’s leaders maintained an unruffled face. The Communist Party’s most influential news outlets did not feature the crisis, choosing instead to promote Mr. Xi’s New Year speech and cheery reports about the holiday season.

On Thursday, China Central Television, the state broadcaster, treated the situation in Wuhan as a footnote in its evening newscast, one of the most watched television programs in China, airing a roughly one-minute report on the outbreak. Experts said Mr. Xi appeared to be trying to prevent a sense of panic and to limit criticism of the party’s response.

“The top priority will be to keep coverage from asking more probing questions about how China’s institutions have responded, questions that might lead to criticism of the government,” said David Bandurski, co-director of the China Media Project, a group affiliated with the University of Hong Kong.

Some internet users found ways around government censorship to criticize the response by local officials, saying on social media that they worried about a repeat of the SARS crisis. Many said they were also concerned about possible food shortages and higher prices on everyday goods.

Mao Shoulong, a professor of public administration at Renmin University in Beijing, said the Wuhan government had made a series of missteps that had eroded public confidence.

Why Dolittle Is Going To Lose Money, Despite Making Nearly $100...

Katie Ledecky Is Swimming, and Studying

Tom Hanks and Rita Wilson Are Released From the Hospital

How to watch live Bundesliga football this weekend

What’s Better Than One Family Home in New Zealand? Three of...

Alert on Philippine Volcano Lowered as Residents Are Cleared to Return