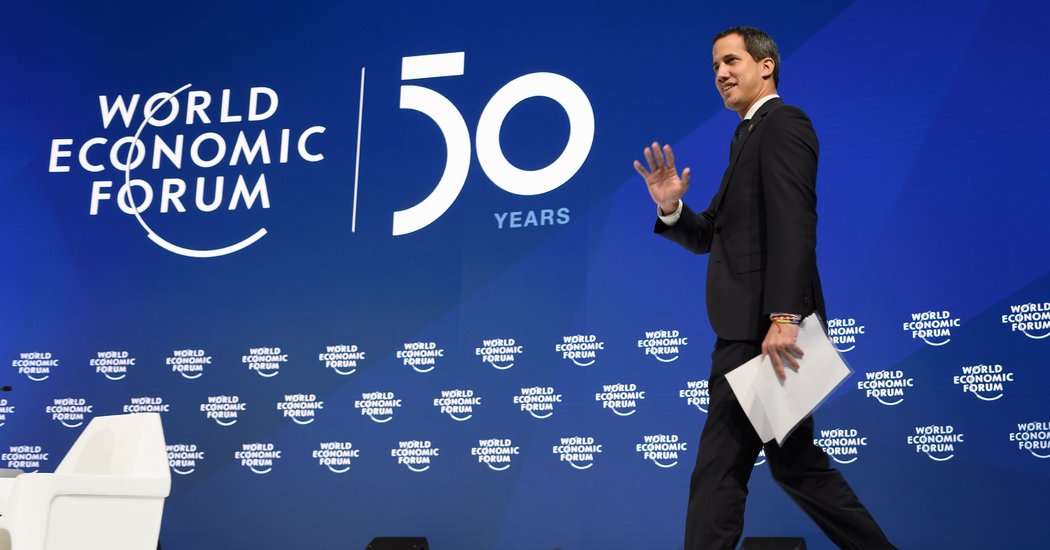 DAVOS, Switzerland — This time last year, Juan Guaidó would have been the toast of Davos. Mr. Guaidó, the Venezuelan opposition leader, had just led a wave of popular unrest to win the presidency of Venezuela’s National Assembly and declared himself the true leader of his crisis-ridden country.

But as Mr. Guaidó made the rounds at this year’s gathering of political and business figures — having come to Europe in defiance of a travel ban at home — he seemed like a man whose moment had passed.

With Venezuela’s repressive president, Nicolás Maduro, still firmly entrenched in power, and with Mr. Guaidó’s most prominent backer, President Trump, distracted by his Senate trial and his re-election campaign, the embattled Venezuelan spent most of his time answering questions about why he had not succeeded in toppling Mr. Maduro.

“We underestimated the ability of the regime to do bad,” Mr. Guaidó told a half-filled hall where, two days earlier, Mr. Trump had spoken to a standing-room-only crowd. “We are really climbing a mountain at the moment.”

Mr. Guaidó insisted that he and his supporters would still uproot the Maduro government. He urged European leaders to crack down on Venezuela’s gold trade, which he said had helped consolidate Mr. Maduro’s control by providing a means of foreign exchange and helping to secure the loyalty of the military.

But Mr. Guaidó struggled to offer fresh ideas for how governments could tighten the pressure on Mr. Maduro. Venezuela is already under heavy sanctions, which have so far failed to dislodge him. In an election year, the United States is less likely than ever to consider more aggressive options, like military intervention.

In Washington, the most vocal proponent of Mr. Guaidó — the former national security adviser John R. Bolton — has left the administration. Mr. Trump did not mention Venezuela during his speech in Davos; he left the Alpine ski resort on Wednesday without seeing Mr. Guaidó.

That left the Venezuelan with a lineup of meetings that included the leaders of Austria, Greece and the Netherlands, as well as a session with a Davos regular, Tony Blair, the former British prime minister. On Tuesday, Mr. Guaidó met in London with Britain’s current prime minister, Boris Johnson.

“The idea behind all these meetings is the same,” Mr. Guaidó said to journalists, speaking through a translator. “People should stop seeing Venezuela as an insoluble problem.”

But then he likened Venezuela to Syria, Yemen, and South Sudan — three war-torn states that are often viewed as insoluble problems.

Although Venezuela is not in a state of war, Mr. Guaidó noted that millions of people had fled the country in search of food or medical care. Those who remain behind are in grinding poverty, living on wages of as little as $3.50 a month, even for nurses and other professionals. The government has turned up its repression, jailing and torturing members of the opposition.

Mr. Guaidó himself took a big risk in leaving the country. He declined to describe how he evaded security forces, except to say that they were not particularly efficient, and his team managed to distract them. Still, Mr. Guaidó faces the possibility of harsh reprisals when he returns home.

“Going back to Venezuela will not be easy,” he said. “I do hope I can get home safe and sound.”

Just before flying to Europe, Mr. Guaidó met Secretary of State Mike Pompeo in Bogotá, Colombia. The United States is one of more than 50 countries that recognizes Mr. Guaidó as Venezuela’s legitimate leader. Mr. Pompeo insisted the administration had not retreated in its determination to see Mr. Maduro ousted, and expressed hope that it could still happen.

“I’ve heard this idea that we’ve underestimated Maduro,” Mr. Pompeo said to reporters. “What’s been underestimated is the desire for freedom that rests in the hearts of the Venezuelan people.”

American officials said Mr. Guaidó’s visit to Davos was valuable because it would put a human face on the struggle in Venezuela. Despite making headlines over the past year, Mr. Guaidó, 36, remains something of an abstraction to people outside Latin America, according to a senior official. By telling his own story, this person said, Mr. Guaidó could still mobilize support among the Europeans, who would be critical in imposing effective sanctions and halting the gold trade.

As Mr. Guaidó analyzed his problems over the last year, he pointed to an offer made by the opposition of amnesty to members of the military who would agree to turn against the Maduro government. The offer did not peel away senior officers, in part because Mr. Maduro gave them access to lucrative gold mines. They have remained a bulwark of support for him.

“We tried to do this, but it sort of rebounded on us,” Mr. Guaidó said. “It is really the top brass of the military that are behind him.”

A reviving stay at a former hospital, restored by the Landmark...

Saudi-Russian Alliance Is Strained as Coronavirus Saps Demand for Oil

Ukraine Is Threatening to Arrest Its Former President

Putin and Erdogan Reach Accord to Halt Fighting in Syria

Before the Liberation of Auschwitz, a March of Misery