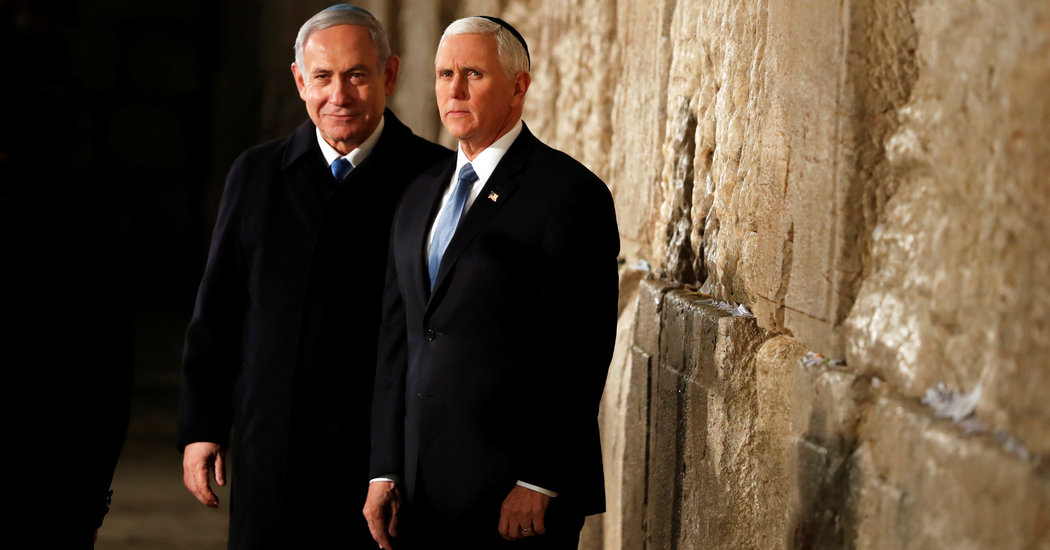 JERUSALEM — President Trump said Thursday that he would release his long-awaited Middle East peace plan within days and invited Prime Minister Benjamin Netanyahu of Israel and his rival, the former army chief Benny Gantz, to the White House next week to discuss it.

Neither the plan nor the visit may do much to advance the cause of peace, but the occasion promises to be a surreal spectacle.

If all goes according to plan, Mr. Trump, who is on trial in the Senate on charges of high crimes and misdemeanors, will play host to Mr. Netanyahu, who has been indicted on equally high charges of bribery, fraud and breach of trust, and to his challenger, Mr. Gantz, who holds no government office and whose main argument to oust Mr. Netanyahu is that he has not been indicted for anything.

The meeting will take both men away from Israel on the day that its Parliament is scheduled to begin debating whether to grant Mr. Netanyahu immunity.

And it does not include any representatives from the other side of the conflict, the Palestinians, who have refused to engage with an administration it sees as hopelessly biased in Israel’s favor.

As for the peace plan itself, Palestinian officials repeated their position Thursday that they would treat any American plan as dead on arrival.

“It’s insane,” said Michael J. Koplow, an analyst and supporter of a two-state solution at the Israel Policy Forum. “There’s really no other word for it.”

Even Mr. Trump acknowledged the oddity of the situation.

“We have both candidates coming — unheard-of,” he told reporters aboard Air Force One as he returned from the World Economic Forum in Davos, Switzerland.

The meeting, set for Tuesday, was announced by Vice President Mike Pence in Jerusalem, where he was attending an event commemorating the 75th anniversary of the liberation of the Auschwitz concentration camp.

But the unfolding developments — which upstaged the large gathering in Jerusalem of world leaders, including President Vladimir V. Putin of Russia and Prince Charles — did not appear to end there.

As if on cue, the Israeli news media began to crackle with varying leaks of what were billed as the precise terms of the American peace deal, terms that Israel’s right-wing government could hardly have improved on.

Israel, for example, would get to annex the strategically important Jordan Valley, making it the country’s new eastern border with Jordan, media reports said. Israel would also have sovereignty over nearly all existing Jewish settlements on the West Bank, including in isolated areas, according to the reports.

Jerusalem would be under Israeli control, including the eastern part of the city, which Palestinians claim as their future capital.

Preconditions for a Palestinian state would be the demilitarization of Gaza, the disarming of Hamas, a cessation of financing terrorism, and a recognition of Israel as a Jewish state and of Jerusalem as its capital, the reports said.

Mr. Trump at first tweeted caution, saying, “Reports about details and timing of our closely-held peace plan are purely speculative.”

But he later told reporters aboard Air Force One that he expected to release details of the plan “sometime prior to” Tuesday’s meeting.

The leaks alone were enough for the Palestinians to express fresh outrage.

Husam Zumlot, a senior diplomat and adviser to President Mahmoud Abbas, said the latest move from Washington “only reaffirms our absolute rejection of what the U.S. administration has done so far, particularly the recognition of Jerusalem as Israel’s capital and other decisions that violate international law.”

And Bassem Naim, a Hamas official and former Gaza minister of health, warned bluntly on Twitter, “Palestinians will hinder the implementation of the deal, whatever the price. It will trigger a new #Intifada.”

Mr. Trump said that he believed the plan could work and that he had spoken to the Palestinians “briefly.”

“They have a lot of incentive to do it,” he said. “I’m sure they maybe will react negatively at first, but it’s actually very positive for them.”

In Israel, many analysts saw Mr. Trump’s invitation as a wily maneuver orchestrated by the seasoned Mr. Netanyahu, who boasts of his close ties to the Trump administration, to entrap the less politically experienced Mr. Gantz.

For one thing, it is likely to shift the pre-election conversation in Israel away from Mr. Netanyahu’s indictment in three corruption cases and could delay or even scuttle Mr. Gantz’s push for the Israeli Parliament to deal speedily with Mr. Netanyahu’s request for parliamentary immunity from prosecution.

Mr. Gantz’s centrist Blue and White party had scheduled a vote on Tuesday to set up a House Committee to begin debating the request. Mr. Netanyahu has been trying to push the process off until after the March 2 election, because he does not have a majority to support his immunity bid in the current Parliament.

The immunity process could go ahead in any case, but Mr. Netanyahu benefits every day it is delayed.

More significantly, though, if Mr. Trump does roll out his peace plan, or parts of it, on Tuesday, Mr. Gantz could be put in a corner.

Mr. Netanyahu, an unparalleled political salesman, could portray the Trump proposal as a “once-in-a-lifetime opportunity,” Mr. Koplow said, using that to “browbeat” Mr. Gantz into agreeing to enter a unity government, with Mr. Netanyahu retaining the premiership.

Shalom Lipner, a former adviser to seven Israeli prime ministers, said, “If the plan is as charitable to Israel as everyone expects and Gantz comes out against it, that would sink his chances because it will be popular in Israel, and it will burn his bridges with the White House.”

If Mr. Gantz signs onto the plan, Mr. Lipner added, he will end up playing “third fiddle to Netanyahu.”

Mr. Netanyahu has already pledged to unilaterally annex the Jordan Valley, a strategic strip of the Israeli-occupied West Bank along the boundary with Jordan. This would be a highly contentious move but would be popular in Israel.

On Tuesday Mr. Gantz offered a pledge that he, too, would annex the Jordan Valley, but only in coordination with the international community, which is hardly likely to be forthcoming absent an Israeli-Palestinian peace deal.

He also called Mr. Netanyahu’s bluff, daring him to move ahead with annexation immediately to prove it is not just election spin.

A green light from Mr. Trump would make it more difficult for Mr. Netanyahu to hold off from annexation, or for Mr. Gantz to oppose it.

At the same time, a plan demanding any concessions from Israel may also prove problematic for Mr. Netanyahu, who depends on the support of coalition partners to his right.

Mr. Trump has repeatedly come to Mr. Netanyahu’s aid — for example, by moving the American Embassy to Jerusalem and by recognizing Israeli sovereignty over the Golan Heights. And Israeli and American analysts said he appeared to be doing so again, just more transparently.

“If the United States comes out with a one-in-a-thousand-year offer when it has not coordinated with one side and the other is at the peak of an election season, it raises questions,” said Sallai Meridor, a former Israeli ambassador to the United States.

And Daniel B. Shapiro, who was former President Barack Obama’s ambassador to Israel, noted that many critics of past presidents had “offered lectures about the unacceptability of U.S. interference in Israeli elections.”

“A lot of the same people are awfully quiet about this blatant interference,” he said.

But Mr. Trump was enthusiastic.

LeBron James Is Reminding Everyone He’s the King

NATO Calls for ‘Peaceful Solution’ After Airstrikes in Syria

When a Drug Study Abruptly Ends, Volunteers Are Left to Cope