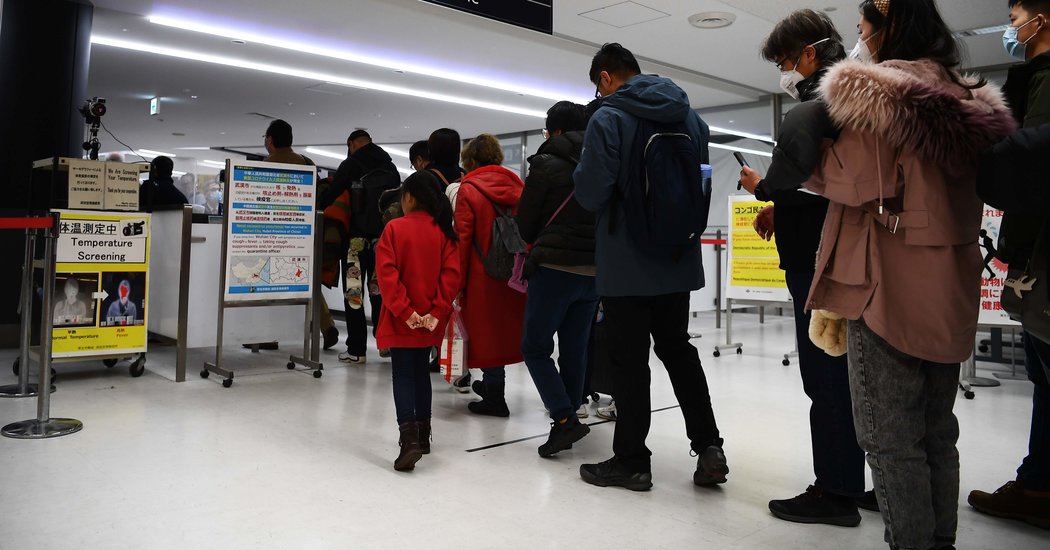 TOKYO — Just as Japan and China have been taking tentative steps toward moving past old animosities, a fast-spreading virus threatens to push them apart.

A deadly coronavirus outbreak in China, which has spawned fears of a pandemic across Asia, is raising concern in Japan that public sentiment could be damaged as Chinese citizens have become an increasingly visible part of daily life.

The alarm over the virus is unlikely to hurt formal government relations. After years of mounting tensions over history and territory, the two largest Asian economies have been drawing closer, with Japan planning a state visit for the Chinese leader, Xi Jinping, this spring.

But with the start of the weeklong Lunar New Year holiday ushering in one of the busiest travel seasons for Chinese tourists, some Japanese say they cannot help but regard Chinese visitors warily. It is a view shared in many Asian countries that have experienced an influx of Chinese tourists — and their money — in recent years.

“I’m worried about the epidemic spreading here,” said Naho Imajima, 34, who works at a tobacco shop in the Kabukicho entertainment district in Tokyo, which is popular with Chinese visitors. “Even people who cough, most of them aren’t wearing masks. It could just be a cold, but I never know. I get nervous when a foreign tourist passes by and they’re coughing.”

Chinese travelers have fueled a tourism boom in Japan, increasing fourfold in the last five years to more than 9.5 million annually, and now representing about a third of all foreign visitors. In addition, more Chinese students are enrolling in Japanese universities, and in some cases they make up a majority in graduate programs.

Many shops and restaurants around Japan now cater to Chinese travelers, posting signs in Chinese and accepting payment systems from China like Alipay or WeChat Pay.

But after two visitors from Wuhan, the epicenter of the new outbreak, were hospitalized in Japan for coronavirus infections over the past week, nerves have been on edge.

This month, a shop owner in Hakone, a popular hot-springs resort town, posted a sign reading, “Chinese are not allowed to enter the store.” A photo of it was widely shared on social media in both Japan and China, and some began to wonder if the new coronavirus would amplify an anti-Chinese undercurrent that persists in Japan.

Masanari Iida, a former candidate for public office in Kanagawa Prefecture, argued on Twitter that the owner was acting in “self-defense.”

“I don’t understand why this is a problem,” Mr. Iida wrote. “The store has a right to choose its customers.”

Fears have spiraled across Asia as China reported that the virus has caused at least 26 deaths and sickened more than 900 people. The Chinese government has put a dozen cities in the central part of the country on a travel lockdown, effectively corralling 35 million residents.

The Japanese prime minister, Shinzo Abe, said on Friday that Japan would increase efforts to quarantine visitors who showed symptoms of the coronavirus. The government also recommended that Japanese citizens refrain from visiting Wuhan for “unnecessary or nonurgent trips.”

All Nippon Airways canceled all flights to and from Wuhan until Feb. 1. JalPak, a package tour operator owned by Japan Airlines, said that 50 customers had canceled trips to China in the past week because of news of the virus.

At a cabinet meeting, Mr. Abe said he hoped that the public would not “worry excessively” and would act calmly, and he called for people to take the same precautions that they would for the common cold, including washing their hands and wearing surgical masks.

With tourism from China such an important segment of the Japanese economy, some business owners said they did not want the coronavirus to affect views of customers from China.

“Seeing the news, we worry about the disease a little, but I cannot say ‘please don’t come,’” said Setsuko Yoshizawa, 70, the owner of a shop in the Tokyo district of Asakusa, the site of a temple that is often mobbed with Chinese tourists. “We cannot survive without customers visiting us. I welcome Chinese visitors.”

Japanese public sentiment about China has improved since the lows seen when the two countries were locked in an intense territorial dispute over islands in the East China Sea, but it is still not terribly high.

According to an annual survey by Japan’s central cabinet office, just over 5 percent of those polled in 2014 said they felt “an affinity with China.” Last year, the figure was about 23 percent.

Komaki Lee, a Chinese-born naturalized Japanese citizen who has twice run unsuccessfully for public office, said he had often experienced discrimination because of his Chinese heritage.

When he was a candidate four years ago and again last year, he said, people defaced his campaign posters with the words “Go home!” or trolled him with similar sentiments online or in person.

“Now it’s the season for a lot of Chinese tourists to visit Japan, and there is this pandemic happening,” Mr. Lee said. “So I think that Japanese people will try to avoid Chinese people more, and I think that’s when discrimination might worsen.”

Still, the more hostile strains of anti-Chinese expression in Japan are met with pushback. When Tsuyoshi Iida tried to run for office in Kanagawa last year, his party declined to endorse him because its leaders said he had repeatedly posted hate speech online directed at Chinese and Koreans.

This month, the University of Tokyo fired an associate professor of artificial intelligence, Shohei Ohsawa, who made anti-Chinese comments on Twitter, including saying that he would never hire Chinese students at a company for which he was doing research.

Japanese attitudes about China may be shaped more by criticism of the Chinese government than its people, said Atsushi Kondo, a professor of immigration policy studies at Meijo University in Nagoya.

“There might be some cases where some people experience trouble over the manners of tourists and have bad feelings,” Mr. Kondo added. “But I don’t think anti-Chinese sentiment is growing in general.”

Will The Rock, Kevin Hart And More Return For The Next...

PS5 Future of Gaming reveal event: How and when to watch...

Why are Zoom meeting passwords now on by default?

Al Kaline Wondered if He Should Have Been a Doctor

He Took a Bullet to Save His Son in Christchurch. Can...