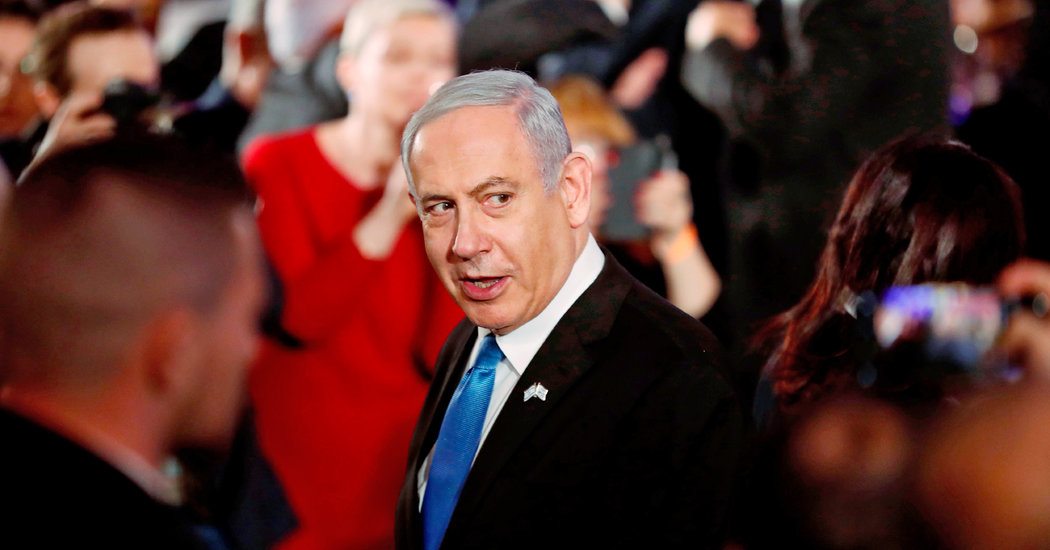 LONDON — Less than a month after being sworn in, President Trump welcomed Prime Minister Benjamin Netanyahu of Israel to the White House with a bold promise: He would broker a peace accord between the Israelis and the Palestinians — the diplomatic unicorn that had eluded half a dozen of his predecessors.

“I think we’re going to make a deal,” he said in 2017. “It might be a bigger and better deal than people in this room even understand.”

“As with any successful negotiation,” Mr. Trump continued, “both sides will have to make compromises. You know that, right?” he added, turning to his guest.

The Israeli leader will return to the White House for meetings Monday and Tuesday, and Mr. Trump is expected at last to lay out the details of that long-awaited plan. Mr. Netanyahu said Sunday he hoped to “make history” on the visit.

But far from a bold effort to bring old enemies together — one that demands painful concessions from both sides — Middle East experts now expect the plan to be mainly a booster shot for Mr. Netanyahu’s desperate campaign to stay in power.

Benny Gantz, again Mr. Netanyahu’s rival in Israel’s third election in less than a year, will have his own separate meeting with Mr. Trump on Monday. He had at first resisted the invitation, fearing a political trap in which Mr. Netanyahu would get to play the statesman while Mr. Gantz would look puny by comparison. But analysts said he could not afford to snub the president, given Mr. Trump’s enduring popularity in Israel.

The Palestinians, who stopped talking to Mr. Trump after he ordered the United States Embassy to be moved to Jerusalem from Tel Aviv in December 2017, will not be at the White House to be briefed on the plan. They have vowed to reject it.

“For him to do this in the middle of an Israeli election, without any Palestinian participation and with no intention to follow up with any of the participants, shows this is not a peace plan at all,” said Martin S. Indyk, who served as special envoy for Israeli-Palestinian negotiations under President Barack Obama.

“It is a farce from start to finish,” he said.

Mr. Indyk’s verdict is harsh but not uncommon among diplomats who have worked on past peace efforts. Like other veterans of those fruitless negotiations, in both Democratic and Republican administrations, Mr. Indyk watched the early days of Mr. Trump’s diplomacy with fascination and even muted hope — that this most undiplomatic of presidents might achieve a breakthrough where they had failed.

That triumph of hope over experience was shared by some in the region. Palestinians and Israelis took to calling it Mr. Trump’s “deal of the century,” outdoing his own description of it as the “ultimate deal.”

The president brought a deal maker’s swagger and a property developer’s instincts to a problem that, after all, involves disputed territory. His close ties to Mr. Netanyahu — something Mr. Obama lacked — raised hopes that he might be able to extract real concessions from Israel. In a sign of the importance Mr. Trump attached to the effort, he put his son-in-law, Jared Kushner, in charge of it.

Mr. Kushner led a team that included Jason D. Greenblatt, the Trump Organization’s former chief lawyer, and David M. Friedman, a bankruptcy lawyer with ties to the Jewish settler movement who became Mr. Trump’s ambassador to Israel. He would emerge as the most influential adviser to Mr. Trump on Israel.

For months, Mr. Kushner and Mr. Greenblatt traveled around the Middle East, meeting with Arab leaders in Saudi Arabia, Egypt, Jordan and other nations. Their strategy, known as “outside-in,” was designed to build a coalition of Arab support for a peace plan. The Arab leaders, the White House hoped, would pressure the Palestinian Authority to accept whatever Mr. Trump offered.

Mr. Kushner devoted particular attention to Crown Prince Mohammed bin Salman of Saudi Arabia, with whom he had cultivated a friendship of like-minded scions. Prince Mohammed expressed a willingness to establish relations with Israel and said the Israelis “have the right to have their own land.”

At home, Mr. Trump’s pro-Israel supporters were growing restive. They worried that he might put too much pressure on Mr. Netanyahu. Mr. Trump told him that a rapid expansion of settlements was not conducive to an agreement. After meeting with Mahmoud Abbas, the president of the Palestinian Authority, in May 2017, Mr. Trump said that it was an “honor” — a post that later vanished from his Twitter feed.

Any such worries, however, were laid to rest seven months later when Mr. Trump announced he would move the embassy, formally recognizing Jerusalem as the capital of Israel. The move delighted evangelicals, as well as pro-Israel donors like Sheldon Adelson, the Las Vegas casino magnate.

But it drove away the Palestinians, who cut off contact with the White House, and doomed the White House’s efforts to build Arab support for its plan. King Salman of Saudi Arabia was among those who condemned the decision, declaring, “East Jerusalem is an integral part of the Palestinian territories.”

The State Department shut down the office of the Palestine Liberation Organization in Washington. It downgraded the American consulate in Jerusalem, which had been a key channel to the Palestinians, by merging it with the embassy under Mr. Friedman, who later said Israel had the right to annex parts of the West Bank.

Even as the rift with the Palestinians widened, Mr. Kushner and Mr. Greenblatt labored on their plan. Working under a veil of secrecy, they compiled a multipage document, with annexes, that officials said would propose solutions to all the key disputes: borders, security, refugees and the status of Jerusalem.

While the plan never leaked — a rarity in the sievelike world of Middle East diplomacy — its general contours became known. It is not expected to call for a two-state solution or give East Jerusalem to the Palestinians. Nor will it offer Palestinian refugees a right of return or other compensation.

Mr. Kushner and Mr. Greenblatt, who has since left the administration, predicted in March 2018 that the Israelis and the Palestinians would each find things in the plan to embrace and oppose. But it was already clear that it would be tilted heavily in Israel’s favor — or more precisely, in the favor of their embattled ally, Mr. Netanyahu.

Facing indictment on multiple corruption charges in early 2019, the prime minister was fighting for his political life. With Mr. Netanyahu facing a closely fought election that April, Mr. Trump gave him an election-eve gift, announcing in March that the United States would reverse decades of policy and recognize Israel’s sovereignty over the Golan Heights, which was seized by Israeli troops in 1967.

With the release of his plan stymied by the instability in Israel, Mr. Kushner turned his attention to economics. In June, he announced the United States would raise more than $50 billion to improve the lives of the Palestinians and their Arab neighbors. His 38-page plan, titled “Peace to Prosperity,” had slick graphics and the promotional tone of a real estate prospectus.

Mr. Kushner followed up with a two-day workshop in Bahrain, which was boycotted by the Palestinians and shrugged off by other Arab leaders, for whom the peace project had faded into irrelevance.

Even after Mr. Trump’s shift on the Golan Heights, Mr. Netanyahu was unable to cobble together a majority to form a government. After a second election, in September, he found himself again short of a majority.

If Mr. Trump releases his plan this week, analysts said, it will be less about delivering the “deal of the century” than giving Mr. Netanyahu one last electoral lift.

Talking Can Generate Coronavirus Droplets That Linger Up to 14 Minutes

Dortmund’s Erling Haaland Adds to His Totals, and to His Legend

Wow, John Wick’s Directors Had To Fight For One Of The...

Zoom is leaking some user information because of an issue with...

Johnny Depp Vs. Amber Heard: Pirates Of The Caribbean And Aquaman...