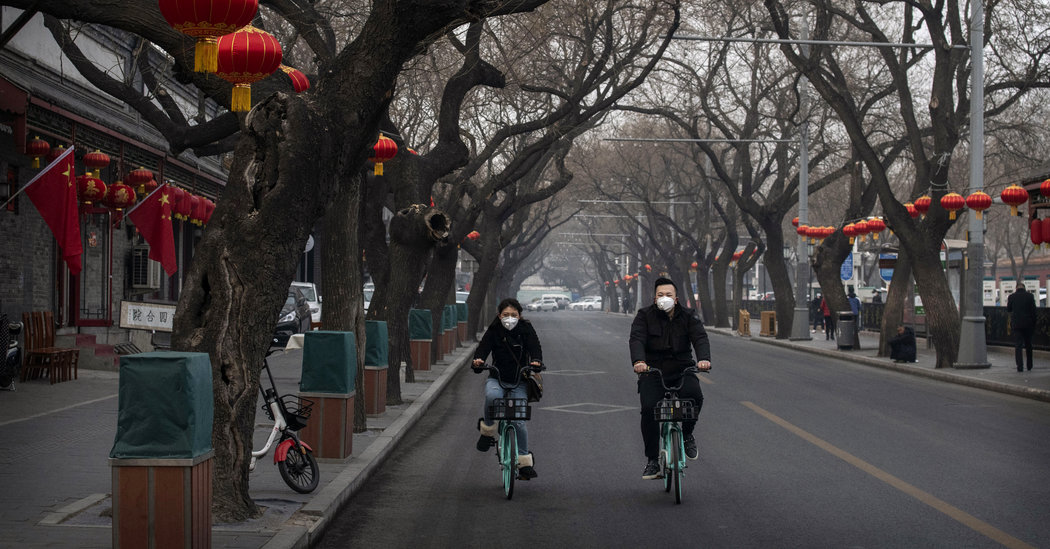 SHANGHAI — Recently, someone following the coronavirus crisis through China’s official news media would see lots of footage, often set to stirring music, praising the heroism and sacrifice of health workers marching off to stricken places.

But someone following the crisis through social media would see something else entirely: vitriolic comments and mocking memes about government officials, harrowing descriptions of untreated family members and images of hospital corridors loaded with patients, some of whom appear to be dead.

The contrast is almost never so stark in China. The government usually keeps a tight grip on what is said, seen and heard about it. But the sheer amount of criticism — and the often clever ways in which critics dodge censors, such as by referring to Xi Jinping, China’s top leader, as “Trump” or by comparing the outbreak to the Chernobyl catastrophe — have made it difficult for Beijing to control the message.

In recent days, critics have pounced when officials in the city of Wuhan, the center of the outbreak, wore their protective masks incorrectly. They have heaped scorn upon stumbling pronouncements. When Wuhan’s mayor spoke to official media on Monday, one commenter responded, “If the virus is fair, then please don’t spare this useless person.”

The condemnations stand as a rare direct challenge to the Communist Party, which brooks no dissent in the way it runs China. In some cases, Chinese leaders appear to be acknowledging people’s fear, anger and other all-too-human reactions to the crisis, showing how the party can move dramatically, if sometimes belatedly, to mollify the public.

Such criticism can go only so far, however. Some of China’s more commercially minded media outlets have covered the disease and the response thoroughly if not critically. But articles and comments about the virus continue to be deleted, and the government and internet platforms have issued fresh warnings against spreading what they call “rumors.”

“Chinese social media are full of anger, not because there was no censorship on this topic, but despite strong censorship,” said Xiao Qiang, a research scientist at the School of Information at the University of California, Berkeley, and the founder of China Digital Times, a website that monitors Chinese internet controls. “It is still possible that the censorship will suddenly increase again, as part of an effort to control the narrative.”

When China’s leaders battled the SARS virus in the early 2000s, social media was only just beginning to blossom in the country. The government covered up the disease’s spread, and it was left to journalists and other critics to shame the authorities into acknowledging the scale of the problem.

Today, smartphones and social media make it harder for mass public health crises to stay buried. But internet platforms in China are just as easily polluted with false and fast-moving information as they are everywhere else. During outbreaks of disease, Beijing’s leaders have legitimate reason to be on alert for quack remedies and scaremongering fabrications, which can cause panic and do damage.

In recent days, though, Beijing seems to be reasserting its primacy over information in ways that go beyond mere rumor control. At a meeting this past weekend between Mr. Xi and other senior leaders, one of the measures they resolved to take against the virus was to “strengthen the guidance of public opinion.”

Wang Huning, the head of the Communist Party’s publicity department and an influential party ideologue, was also recently named deputy head of the team in charge of containing the outbreak, behind only China’s premier, Li Keqiang.

Chinese officials seem to recognize that social media can be a useful tool for feeling out public opinion in times of crisis. WeChat, the popular Chinese messaging platform, said over the weekend that it would crack down hard on rumors about the virus. But it also created a tool for users to report tips and information about the disease and the response.

Internet backlash may already have caused one local government in China to change course on its virus-fighting policies. The southern city of Shantou announced on Sunday that it was stopping cars, ships and people from entering the city, in a policy that echoed ones in Wuhan. But then word went around that the decision had led people to panic-buy food, and by the afternoon, the order had been rescinded.

Nowhere has the local government been the target of more internet vitriol than in Hubei Province, where Wuhan is the capital.

After the Hubei governor, Wang Xiaodong, and other officials there gave a news briefing on Sunday, web users mocked Mr. Wang for misstating, twice, the number of face masks that the province could produce. They circulated a photo from the briefing of him and two other officials, pointing out that one of them did not cover his nose with his mask, that another wore his mask upside down and that Mr. Wang did not wear a mask at all.

During an interview Mr. Zhou gave to state television, commenters in live streams unloaded on him, with one writing: “Stop talking. We just want to know when you will resign.”

Top authorities may be deliberately directing public anger toward officials in Hubei and Wuhan as a prelude to their resigning and being replaced. Many other targets within the Chinese leadership seem to remain off limits.

This month, as news of the coronavirus emerged but Mr. Xi did not make public appearances to address it, people on the social platform Weibo began venting their frustration in veiled ways, asking, “Where’s that person?”

But even those comments were deleted. So some users started replacing Mr. Xi’s name with “Trump.” As in, “I don’t want to go through another minute of this year, my heart is filled with pain, I hope Trump dies.”

Other people hungering to express frustration have taken to the Chinese social platform Douban, which has been flooded recently by user reviews for “Chernobyl,” the hit television series about the Soviet nuclear disaster.

“In any era, any country, it’s the same. Cover everything up,” one reviewer wrote on Monday.

Some Chinese news outlets have been able to report incisively on the coronavirus. The influential newsmagazine Caixin has put out rigorous reporting and analysis. The Paper, a digital news outlet that is overseen by Shanghai’s Communist Party Committee, published a chilling video about a Wuhan resident who couldn’t find a hospital that would treat him and ended up wandering the streets.

Mr. Xiao, the Chinese internet expert, said the central authorities long gave such outlets special leeway to cover certain topics in ways that official media cannot. But the outlets should not be viewed as independent of the government, he said, calling their coverage “planned and controlled publicity” from the authorities.

Even outside the digital realm, it is not hard to find people in China who remain unsure of whether to trust what their government is telling them about the outbreak.

Chen Pulin, a 78-year-old retiree, was waiting outside a Shanghai hospital recently while his daughter was inside being tested for the virus. When word of the disease first began trickling out, he immediately had doubts about whether officials were being forthcoming about it.

“Even now, the government seems to be thinking about the economy and social stability,” Mr. Chen said. “Those things are important, but when it comes to these infectious diseases, stopping the disease should come first.”

Hotels Ramp Up Their Wine-Tourism Experiences

Where Surgeons Don’t Bother With Checklists