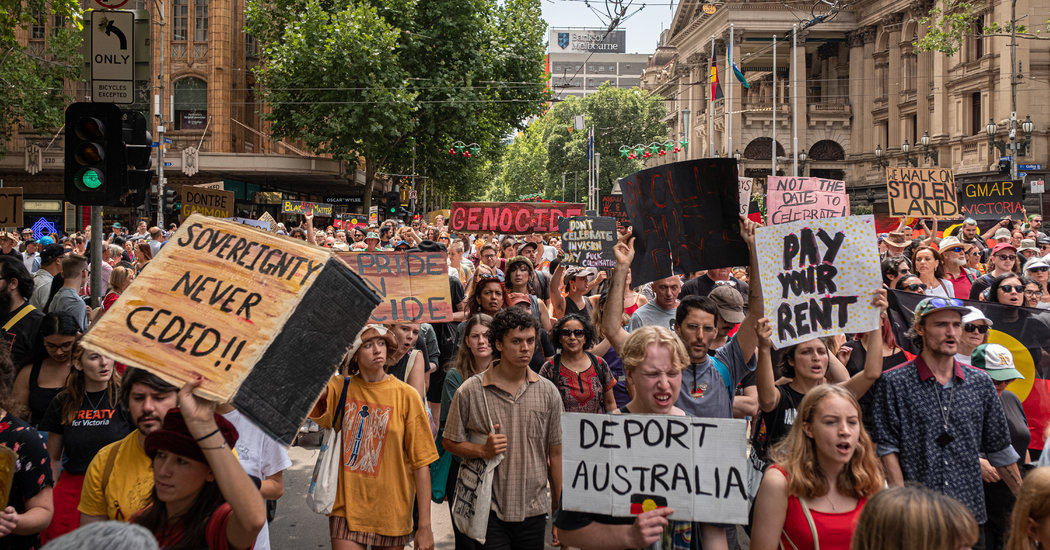 MELBOURNE, Australia — It was a tale of two worlds.

One was angry, insistent on forcing social change.

The other was walled off from the concerns of the first, insulated by race, privilege and wealth, inside the comforting cocoon of tennis.

In the warm late morning on Sunday, the first balls were struck in what would be a long, festive day at the Australian Open. Melbourne Park had the blissful feel of a party, which in some ways it was. Jan. 26 marked the day in 1788 when the first fleet of ships from Britain entered Sydney Cove — the dawn of British colonization of the land.

“It’s a day to remember and give thanks for being Australian,” one fan told me. “A day for those of us here to take in some great tennis. And for a lot of us, frankly, a day to party.”

It is an official national holiday here, but not an ordinary one. To understand, all you had to do was walk 10 easy minutes from the tennis courts to a wide boulevard that cuts through downtown. There, tens of thousands of protesters came together in a clamorous gathering to make very clear that they believe Australia Day should be abolished.

They called it by another name.

“Invasion Day,” said Meriki Onus, an Indigenous Australian activist who for the last several years has helped organize the protest in Melbourne.

Invasion Day, they said, was when outsiders came and everything changed for the worse.

Their chants punctured the downtown air, hard, rhythmic and swift.

I’d come to ask questions and observe. I saw demonstrators everywhere, hip to hip. In both directions, the crowd stretched as far as the eye could see. Indigenous parents, children and elders. White progressives. Recent immigrants from Asia, Africa and the Middle East. Block after block after block, jammed together for a cause that is gaining attention across the country.

From the back of a beaten white truck, demonstrators took to a microphone to deliver speeches before a heaving crowd. They urged strong action and told painful stories, narratives remarkably similar to the plight of Native Americans in the United States. Stories of being sidelined into the far corners of society. Stories of death, murder and a troubled justice system, of poor health care, poor education, destruction of the land and extreme poverty.

“No pride in genocide!” they shouted, a slam to the boosterism many in their country feel about Australia Day.

“No pride in genocide!”

The march moved slowly through downtown, stopping traffic in all directions for nearly a mile. Among the organizers — a group made up mostly of local women known as Warriors of the Aboriginal Resistance — apprehension filled the air. On Bourke Street, normally choked with cars and light-rail trains, everyone stopped for a while. Word had seeped through the crowd that white nationalists were nearby, looking to taunt, or maybe something worse. From the heart of the demonstration, the thick of it, nobody could see if this was true.

Then the throng pressed forward to finish the three-fourths-mile demonstration at the city’s Flinders Street rail station. There were tears of joy, anger and devastation, and Indigenous elders wearing T-shirts with the red, black and yellow Indigenous flag, and families walking with children. “I came here to show my kids that there has been resistance, that we were not just victims, which is what we are taught in the schools,” said Clayton Ison, 41, a social worker, balancing his young daughter on his broad shoulders so she could get a better look. “I came to show them that there are people who stand up and fight.”

What about the Indigenous athlete in Australia?

“They have to be very careful,” one protester said, echoing a refrain I heard repeatedly. “They have to choose their words carefully, or they get told they are out of line. We understand and we support them still.”

The Aboriginal athlete whose name I heard mentioned most often was a cautionary tale: the Australian rules football player Adam Goodes. Among the best players of the early 2000s, Goodes was outspoken about the racism he faced and publicly celebrated Indigenous culture. He paid a stiff price, becoming the target of sustained booing and taunts that caused him to take a leave from the game in 2015, and then retire at the end of that year.

What about the Australian tennis player Ashleigh Barty? Barty, 23, is the top-ranked female tennis player in the world. She has Aboriginal roots on her father’s side and calls herself “proudly Indigenous.” She is only the second Indigenous Australian to make a mark in top-flight tennis. The first was Evonne Goolagong Cawley, a seven-time winner of Grand Slam singles events who reached No. 1 in the 1970s.

Barty, who won the Young Australian of the Year Award over the weekend, is not known for wading deep into social issues or politics. Instead, she has embraced a middle ground, serving as the national Indigenous tennis ambassador for Tennis Australia and promoting tennis access for Indigenous youth. She embodies a potent symbolism — same as the activists and the marchers do. But she doesn’t make a big deal about it.

When the protest ended after four cacophonous hours, I walked for a while with Onus back through the streets. We could see the gleaming roof of Rod Laver Arena in the near distance.

“Part of me thinks of our athletes and says, why don’t you say something and speak out more?” she said. “But we have seen what happens to them when they do. Part of me wishes Ash Barty would speak out and say, ‘When are we going to do something about these issues we are facing?’ But I don’t blame her. I support our athletes. I think they are scared. And they should be. Because this is Australia, and it is scary here.”

After the march, I went straight to the tennis courts at Melbourne Park. Official attendance for the day session was 53,830, roughly the same as at the march, according to activists. But the Australian Open, set apart from nearby streets, surrounded by gates and high walls, had a decidedly different feel from the bare bones precariousness of the demonstration.

The crowd was not entirely white, but overwhelmingly so. It was not entirely wealthy but, judging by the way fans jammed into the shops and restaurants in the gaps between watching matches, there was money to burn. It was like being inside a shimmering shopping mall. Hence the bars selling liquor and Champagne; the stage showing off the newest model of a powerful sports car; the restaurants hawking dim sum, wood-fired pizza and roast duck; the shops selling expensive sunglasses and Australian Open towels.

Abolish or even simply alter the timing of Australia Day? I heard all sides from tennis fans about this.

“It’s just a day,” one man told me. “If our Indigenous people want to move it or something, whatever. Just as long as we get to take it as a holiday.”

Another said: “We stopped observing it entirely when we came to see how this hurts so many Indigenous people. They’re our friends, and it’s a matter of respect. This after all is their land.”

Another was upset, saying: “Abolish it? Change the date?” Then added: “The people against it cry racism, but that has nothing to do with me. I didn’t do anything to them.”

There was consensus on one thing: Barty, the great hope for a nation that has not had a homegrown women’s singles winner since 1978. She is beloved.

When Barty took the court on Sunday night, she did so to thunderous applause. She faced a stern test from 18th-seeded Alison Riske, an American who upset Barty last summer at Wimbledon. The match went long. Riske dominated the second set. The third was in doubt until Barty dialed in her game and won, 6-3, 1-6, 6-4.

After the match, she fielded a few questions, ever earnest and quick to respond. Most were about her game and her prospects.

One was about the downtown protest. All those thousands of people, loud, insistent and marching for change. What did she think of it?

What if Trump Wins? Europeans Fear a More Permanent Shift Against...

The Drive-In Theater: Keeping Drama Alive During the Lockdown

In Poland, Communist-Era Restaurants Are Perfect for the Moment

Venezuela’s Capital Is Booming. Is This the End of the Revolution?

World Cup Skiing Searches for Answers to Its Injury Problem