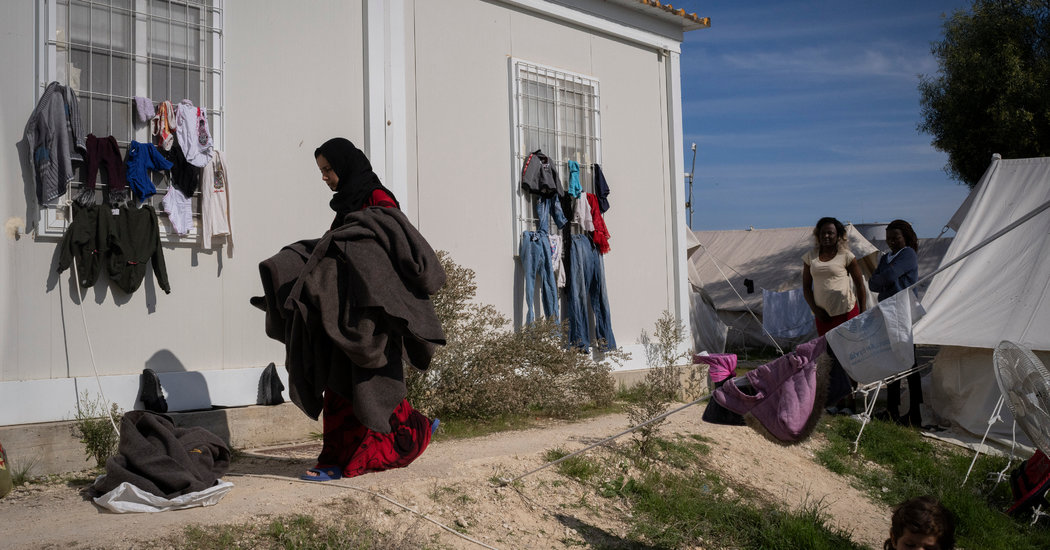 But instead of heading to his university in the Turkish-controlled north, he made his way to the so-called green line — a nominal barrier that divides the island — and into the Republic of Cyprus, a part of the European Union.

Today, awaiting a decision on his asylum application, he lives in the tidy Kofinou refugee camp, where Syrians, Palestinians and other Cameroonians are his neighbors.

Mr. Yebga and the others are among the more than 11,200 people who last year discovered a circuitous route into the European Union that has left this small island with the most asylum seekers per capita in Europe.

At the height of the migration crisis in 2015, the bloc desperately struck a deal with Turkey to stop asylum seekers from reaching Greece.

Since then, far fewer migrants have tried to cross the Aegean. But Cyprus has proved to be a vexing loophole.

“The simplest way is to think of the north of Cyprus is as the world’s biggest airport transit lounge,” said James Ker-Lindsay, a senior research fellow at the London School of Economics who specializes in the politics of southeastern Europe.

More asylum seekers are doing just that, presenting Cyprus, population 850,000, with a budding migration crisis that much of the rest of the European Union has left behind. Most migrants, the Cypriot authorities said, arrived by land from the north.

Mr. Yebga, a 23-year-old with a quick, beaming smile and poetic English, said he left his home country because he faced persecution as a journalist as civil strife simmered.

After his mother was beaten for refusing to tell the police where he was, Mr. Yebga said he knew he had to get out. He spent 1,000 euros, about $1,100, on his Turkish Airlines flight and another €1,000 to enroll in college in northern Cyprus.

In November, clasping a single bag, he left for Cyprus.

Within days, he was in the European Union, housed in a quiet refugee camp made of shipping containers and a small playground nestled in the hills near the capital, Nicosia, where he applied for asylum.

“I had no idea about the division of Cyprus,” Mr. Yebga said on a chilly night at his temporary home, echoing dozens of others in his situation who express bafflement at the complex political situation. “I just thought, ‘I need to get to Europe, to be safe from harassment.’”

People smugglers and individuals who present themselves as agents for private universities in Turkish-controlled Cyprus often suggest the route to potential asylum seekers, but do not explain the intricacies of the political situation on the island.

Many asylum seekers arrive on Cyprus believing that it is somehow linked to mainland Europe (it is not), or that it belongs to the Schengen zone of passport-free travel (it does not).

Experts say this is why Cyprus emerged as a destination only after other routes to the European Union closed.

The number of asylum seekers in Cyprus was five times higher in 2019 than it was four years ago, unlike in the rest of the bloc, where those numbers have tapered off markedly since 2015.

The island’s budding migration crisis is a consequence of its fraught history and continuing division, which has defeated attempts at mediation for decades.

After a coup overthrew the Cypriot government in 1974 and there was an attempt to unite the island with Greece, Turkey sent in its military. When the fighting stopped, the island was divided.

Today, the so-called green line is neither a border nor a bridge, but it separates the ethnically Greek south from the Turkish north, which is controlled by an administration recognized only by Turkey.

The status of the island, which is in the eastern Mediterranean, just 100 miles or so from the Syrian coast, spawns myriad problems that affect Cypriots on both sides of the green line.

In the black box that is the “Cyprus Problem,” as the intractable division of the island has come to be known, refugees are additional collateral damage.

As the north is considered occupied territory of the Republic of Cyprus, the authorities in Nicosia neither recognize nor communicate with the administration there.

On the flip side, Turkey does not acknowledge the internationally recognized government of the Republic of Cyprus in Nicosia, which means that the agreement between the European Union and Turkey on migrants de facto cuts out Cyprus.

Although some asylum seekers reach southern Cyprus by air or by boat from Lebanon, Syria or Turkey, an overwhelming majority come overland from the north, the authorities say.

An unknown number of migrants languish in northern Cyprus, which for years has been a destination for Middle Easterners and Africans fleeing economic hardship and war.

The authorities in the north periodically crack down — and they do not offer asylum or refugee status — but they also tolerate many.

But they have found themselves at a loss with what to do with the droves of Syrians who arrived in the past two years, before they needed visas.

One young woman from Homs, Syria, said she was on the last direct flight from Beirut, Lebanon, to Ercan, in northern Cyprus, in June. When she landed, she said, she was packed into a container with dozens of other Syrians by the airport for days. The fiasco prompted northern Cyprus to tighten its visa rules for Syrians.

Eventually, a nongovernmental organization affiliated with the United Nations helped the stranded Syrians get to the green line, which they crossed, said the young woman, who identified herself only as Roshka.

Others have found themselves trapped in limbo in the north, including Mustafa Alagha. An architect by training raised in a well-to-do professional family bouncing between Syria and Kuwait, he fled Aleppo in 2012, heading first for Alexandria, Egypt.

He got his architecture degree in a northern Cypriot college, and completed a master’s degree. For a while, he was happy, he said, making friends with other Syrians.

Then the walls started closing in. First, his Syrian passport expired, and he had no means of renewing it — other than turning up at a Syrian Consulate. But that would mean handing himself in to a government that wants to enlist him in the army.

After the administration in northern Cyprus tightened its visa rules, he applied three times for a visa to go to Turkey, and was rejected each time.

If he went to the green line and asked the Republic of Cyprus for asylum, he would be stuck waiting for a decision for years and would not be able to work as an architect.

For now, he has a job and an apartment. But, ultimately, he is stuck.

‘Like an Umbrella Had Covered the Sky’: Locust Swarms Despoil Kenya

Businesses ‘Getting Killed’ on Russian Border as Coronavirus Fears Rise

Trump Focuses on Economy at Davos, Seeking a Counter to Impeachment

China Targets the Coronavirus, and Farmers Pay a Price

How Many Coronavirus Cases in China? Officials Tweak the Answer

From the Strategist: The best running hydration packs and water bottles

She Owns the Hip Boutique Bird. These Are Her 5 Places...

Jump in Coronavirus Cases on Ship Poses a Critical Test for...

These Artifacts Were Stolen. Why Is It So Hard to Get...

Kenya’s Longest-Serving Ruler Divides in Death, as in Life