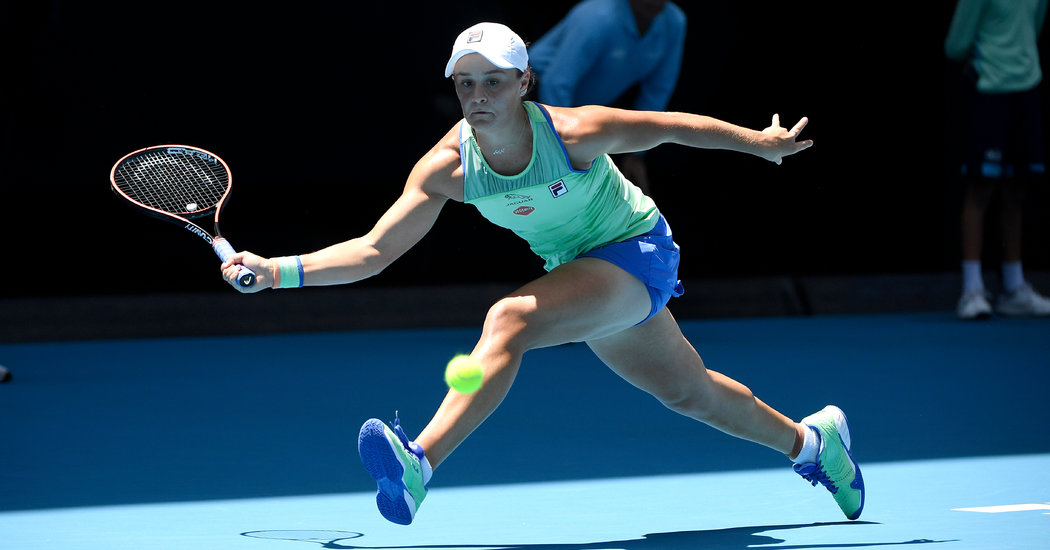 MELBOURNE, Australia — In downtown Melbourne, Ashleigh Barty is nearly impossible to avoid. Her image adorns posters not just for tennis apparel but also for things like sunblock, watches and even Vegemite, the savory spread that is an Australian classic.

The displays embody a hope — unfulfilled for more than 40 years — for someone from the host country to win an Australian Open singles title.

Now, Barty is two wins away as the top seed in the women’s tournament, with Simona Halep as the highest-seeded potential opponent in a draw that has lost many top players. Halep, the No. 4 seed who could meet Barty in a final, is scheduled to play in a quarterfinal on Wednesday.

Given the history of others falling short in the face of high expectations at home, it makes sense that Barty has tried to stay within the tennis bubble to avoid seeing the hype (beyond members of her team sending her photos of posters when they see them in the city).

“I’ve been on-site quite a bit, not really going for leisurely strolls around Melbourne,” said Barty, the reigning French Open champion, who is nicknamed Ash. “When I have an hour or two, it’s more just going back to the apartment and spending time with family. That’s about it.”

Barty is the first Australian woman to reach the Australian Open semifinals since Wendy Turnbull in 1984. She is scheduled to face Sofia Kenin, an American seeded 14th, on Thursday for a spot in the final.

No Australian woman has reached the final since Turnbull in 1980; no Australian woman has won the title here since Chris O’Neil in 1978, a time when most top international players did not compete in the event. The last men’s singles champion in the tournament from the host country was Mark Edmonson in 1976. In the 33 years that this tournament has been held at Melbourne Park, Barty, 23, is the first woman to even reach the singles quarterfinals twice.

Barty has been a far steadier hand at the helm of Australian tennis hopes than Samantha Stosur, who beat Serena Williams to win the 2011 United States Open but failed after that to get past the third round in Australia’s Grand Slam tournament.

Even retired male stars like Lleyton Hewitt and Pat Rafter, who both won two Grand Slam titles outside Australia, were not able to do the same at home, to the annual disappointment of local fans.

Blocking out the expectations of her country isn’t easy for Barty here, and she has had to develop her ability to keep grounded, an early challenge in her career. She won the 2011 Wimbledon junior title when she was 15, then struggled with the high expectations to be her country’s next star, to the point that she took a break from the sport three years later to play professional cricket.

Nick Kyrgios, who was the last Australian in the men’s draw when he lost in the fourth round on Monday to Rafael Nadal, said Barty was now well equipped to handle the pressure.

“She’s been dealing with expectation for as long as I’ve known,” Kyrgios said. “She was killing it in juniors, then she stepped away from the game to sort her life out, her mind out. Then she came back, and she’s killing it.”

Barty said she could do without all the attention. “I’d prefer to just be sitting at home just living my quiet little life,” she said. “I mean, no offense, but not having to chat to you guys every day would be pretty good. I feel like I have nothing to say. I’m talking in circles a little bit.”

Dispatch from a Locked-Down Melbourne

Australia Thought the Virus Was Under Control. It Found a Vulnerable Spot.

Tom Hanks Got Sick in Australia, Where Coronavirus Testing Isn’t Such...

Best DNA testing kits 2020: From ancestry to genetics, these are...

Motorola Razr (2020) initial review: It's flip to be square