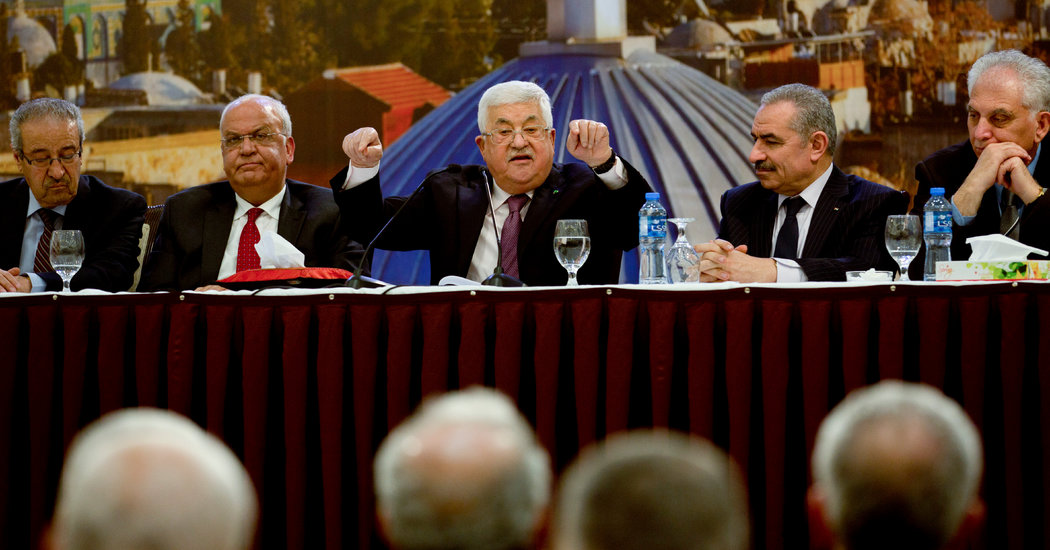 JERUSALEM — For Mahmoud Abbas, the ailing octogenarian president of the Palestinian Authority, his life’s work — a viable state side-by-side with Israel — is quickly slipping away.

President Trump’s Middle East plan deprives the Palestinians of nearly everything they had been fighting for: East Jerusalem as their national capital, the removal of Jewish settlements on the West Bank, and territorial contiguity and control over their own borders and security that a sovereign state normally enjoys.

While it was always presumed that such a state would be forged through talks with the Israelis, years of failure, a weak and divided Palestinian leadership, and an Arab world that has largely moved on have all emboldened Mr. Trump and Prime Minister Benjamin Netanyahu of Israel to try to impose a solution of their own.

The landscape has shifted so much in recent years that Mr. Abbas has few good options.

With only muted reaction from Arab neighbors, a struggling Palestinian economy, little apparent appetite among Palestinians for a violent response and the United States having abandoned any pretense of neutral mediation, a proposal that might have been considered outlandish a decade ago landed with little serious opposition.

Rather than fighting back, some Palestinian activists on Wednesday were saying the best option may be breaking up the Palestinian Authority, leaving Israel to assume the burden of providing for the West Bank’s 2.5 million Palestinians.

Mr. Abbas could decide that this is the moment for dramatic pushback, like walking away from the security cooperation that has long helped protect Israelis from terrorism. He could try to unleash violence to try to draw more global attention.

But if his overriding motive is self-preservation, the safer option would be to try to weather the storm, hoping that Mr. Trump is defeated in November, or Mr. Netanyahu even sooner.

That focus on his own survival, as Mr. Abbas’s many local detractors are keenly aware, would place him in the same category as his American and Israeli adversaries — leaders whose personal and political predicaments appear to be driving them in making the weightiest decisions of state.

“One guy’s dealing with impeachment, another with an indictment, and Abbas is 85 years old,” said Dimitri Diliani, a 46-year-old member of the Fatah Revolutionary Council who is impatient for the president, who is still 84, to go. “He’s looking for a way to dodge the bullet and stay in power.”

But even if they wanted to, Palestinians only have a limited ability to stand up to an American-Israeli partnership.

Yara Hawari, 31, a scholar and analyst for Al Shabaka, a network of Palestinian analysts, said the Trump plan was becoming a cautionary tale about the diminishing importance of international law when those making the rules are unafraid to exploit their power.

“What happens here can happen elsewhere very easily,” she said. “If you don’t care for the Palestinians, at least care for yourselves.”

The assorted calls for action from Palestinian activists, thinkers and analysts eager to shake up the prevailing inertia sounded like variations on a theme of admitting the failure of the Palestinian Authority to grow into a state.

Some called for the authority to dismantle itself, which would require Israel to take on the costs of health, education, social welfare and policing of West Bank Palestinians, and would remove an entity that they see as camouflaging the occupation’s ugliness.

“We couldn’t have seen 50 presidents and prime ministers in Israel last week if it was revealed as an apartheid state,” said Hamada Jaber, an activist in Ramallah, referring to a Holocaust commemoration in Jerusalem that attracted dozens of world leaders. “It’s still hiding itself behind the P.A.”

But Tareq Baconi, 36, a Palestinian analyst for International Crisis Group, cautioned that any wind-down of the authority should be strategic, not impulsive.

“There needs to be a serious exploration — not another empty threat from the president’s office — of what dismantling the P.A. looks like,” he said. “How will the economy be managed, what kind of resilience infrastructure needs to be built to take its place, and how can security cooperation end without endangering Palestinians or risking instability?”

Mr. Abbas has remained typically opaque, offering little insight into his current thinking. One of the weaknesses and failings of the leadership, said Sari Nusseibeh, 70, the former president of Al Quds University, was “its inability to address the people openly and to present ideas.”

“I don’t know if they are doing any thinking at a deep level,” Mr. Nusseibeh continued, “and Abbas, as people say, is very much a one-man show.”

He is also increasingly authoritarian, as Ms. Hawari noted. “I’m trying not to fall into the trap of calling for anything so I don’t get arrested,” she said, adding, “I don’t see a just and free Palestinian future with the P.A. in place.”

Mr. Abbas called again Tuesday for elections, prompting eye rolls among critics who note he is entering the 16th year of what was supposed to be a four-year term. Few believe he is serious.

A better idea, several said, would be to hold elections for the Palestine Liberation Organization, as a way of revitalizing the group still widely seen as the legitimate representative of the Palestinian people.

Still, many Palestinians view the authority, one of the few tangible achievements of the national cause, as worth preserving.

“Personally I don’t think handing over the keys is a smart move,” said Nour Odeh, a Palestinian writer and analyst. “A right-wing Israel drunk on power with Trump’s support couldn’t care less,” she said, adding: “We built these institutions with the blood and sweat of our sons and daughters. Why give it up?”

Raja Khalidi, a development economist who runs a research institute, said there was the added matter of a sense of duty. “I can’t see any political leadership walking away from the responsibility it’s assumed for 30 years and allowing Israel to return to that role,” he said.

Disillusioned about statehood, especially the kind of statehood now on offer, Palestinians are increasingly rejecting a two-state solution to work for a single state with equal rights and the vote for all people living between the Jordan River and the Mediterranean.

That idea, though, is “unrealistic,” said Sani Meo, publisher of This Week in Palestine, a Ramallah-based magazine. “Of course Israel will never give us the vote.”

A more immediate measure many Palestinians want is an end to Israeli-Palestinian security cooperation, which they see more as collaboration with the enemy. Mr. Abbas has resisted that so far because the teamwork with Israel also helps keep Hamas at bay in the West Bank, ensuring his survival.

Equally popular would be national reconciliation and the healing of the 13-year, bitter schism between Mr. Abbas’s Fatah-led Authority in the West Bank and his rivals in Hamas, the Islamic militant group that controls Gaza. There was a veneer of unity the night the Trump plan was announced, with Mr. Abbas and the head of Hamas’s politburo, Ismail Haniya, speaking by phone. But few believe it will go anywhere.

And the leadership has other problems than disunity. Mr. Baconi of the International Crisis Group recalled that before the British election last month, he sat with Palestinian officials who expressed the seemingly far-fetched hope that Jeremy Corbyn would win, Mr. Netanyahu would be defeated and Bernie Sanders would be elected president of the United States.

“It misses the point that you don’t manage the context, you operate in it,” Mr. Baconi said.

So far, though the Israeli military sent reinforcements into the West Bank and along the Gaza border on Wednesday, Palestinians were not taking to the streets in large numbers.

It would be wrong to read that as acquiescence, Ms. Hawari said. The Palestinian grass roots have been weakened over time, she said, not just by the Israelis but by the authority’s own repression, since protesters against the Israeli occupation also sometimes protest against autocracy and the corruption of their own leaders.

She added that the hundreds of Palestinians killed by Israeli soldiers at demonstrations along the Gaza fence set a “really gruesome precedent” for how Israel might respond to a mass mobilization.

“If thousands of us went down to the streets in the West Bank, do you think that would be met lightly?” she asked.

Mr. Diliani, the Fatah Revolutionary Council member, said Palestinians were torn over whom to protest against. “Do we overcome our internal problems with Abbas first?” he asked. “Or with Israel?”

He added: “You will hear this conversation in every restaurant, everywhere you go. Who do we target first? Who should we fight?”

What Palestinians of every age and background still can agree on is the idea that merely staying on the land, with steadfastness, or “sumud” in Arabic, is an act of resistance.

“We are not going anywhere,” Ms. Odeh, the writer, said. Their mere presence, she said, poses a long-term challenge to Israel’s right wing, not to mention Zionism itself.

Mr. Khalidi, the economist, said Palestinians needed to focus inward while they wait for a better set of circumstances.

“How do we get back to being one community?” he asked. “What can we do to get people engaged in building their lives, and their nation, without it necessarily being a state?”

“What do I need a state for,” he added, “if it doesn’t give me more than I already have?”

DO YOU WANT TO GAIN HEALTHY WEIGHT? 7 TIPS IF YOU’RE...

James Gunn Is Having The Best Time Filming The Suicide Squad...

Taiwan’s Weapon Against Coronavirus: An Epidemiologist as Vice President

House Hunting in Malaysia: A Restored Rowhouse in Penang

With Inflation Ravaging Currency, Iran Is Changing Names and Numbers

U.S. Embassy in Baghdad Is Hit by Mortars