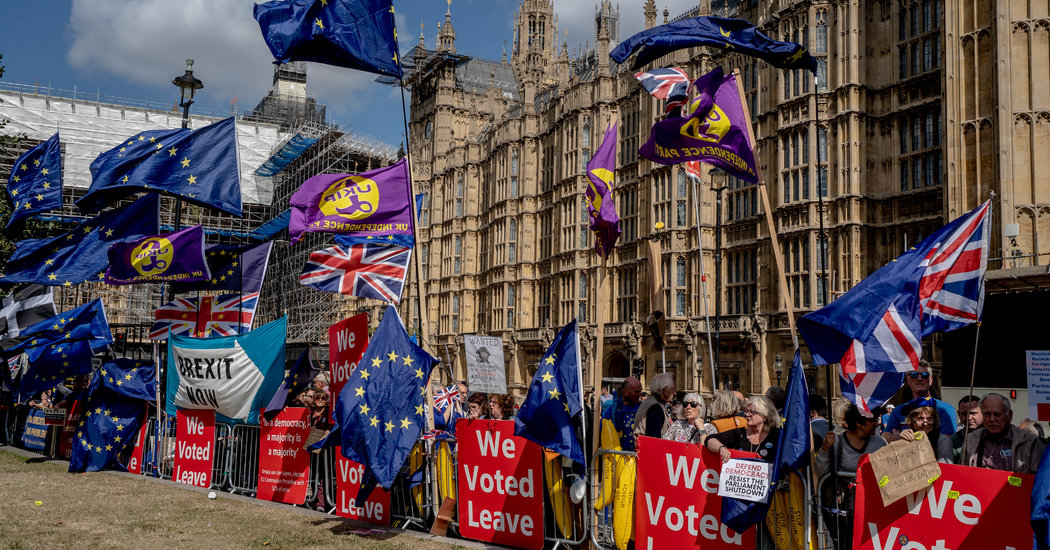 LONDON — When Britain leaves the European Union at 11 p.m. on Friday, some will be celebrating and others will be mourning. But for most people interviewed this week around the country, it seems to mark a time for recovery — from years of wrangling that has upended the political system and sometimes strained the country’s social fabric.

“It’s just been day after day of dysfunction, division and economic uncertainty. I’m not sure how we are supposed to bounce back from this,” said Andrew Fielden, a 39-year-old London-based accountant who supported Britain remaining in the European Union. “The irony is that Brexit was all about taking back control, but we’ve never been so out of control. No one even knows what the reality of Brexit will look like.”

Since the 2016 referendum on Britain’s membership of the union, political discord has rippled through the country, sundering towns and cities and rupturing relationships among families and friends. The atmosphere became so toxic that in December’s general election, many Britons crossed traditional political divides to deliver the Conservative government a substantial mandate to “get Brexit done.”

“Voting in the election was one of the hardest decisions of my life,” said Madeline Shaw, 42, a social worker from the southern port city of Southampton. She said she had almost always voted for the opposition Labour Party, but switched to the Conservatives this year because they promised to deliver Brexit.

“We’ve made a spectacle of ourselves squabbling over Brexit for years. We’ve let down vulnerable communities, whose needs have been neglected because the government was paralyzed by Brexit,” Ms. Shaw said. “We had to move forward before the damage caused became irreparable.”

Nothing has divided Britain quite like the question of Brexit. Those in favor are adamant that cutting financial and legal ties with the European Union and taking back control of immigration will allow Britain to reclaim its sovereignty and prosper. Those who want to remain feel an impending sense of loss at the prospect of being excluded from the bloc, its economic benefits and influence in the rest of the world.

The tension between the two camps is visible in the port town of Boston on the east coast of England, which has both Britain’s highest proportion of Eastern European immigrants and one of its largest majorities for Brexit.

Around 13 percent of the town’s 65,000 people were born elsewhere in Europe, according to the 2011 census, and Boston’s European population has continued to grow over subsequent years.

“This isn’t about racism or discrimination against foreigners,” said Martin Lewis, a retired teacher from the town. “We welcome different nationalities and cultures in England, but the number we have absorbed is out of control. There aren’t enough jobs, houses and services to accommodate these people.”

A Polish handyman from the town, who did not give his name for fear of damaging his business, said that many of the anxieties Boston residents had over immigration were inflated and not representative of reality.

“We do the work they do not want to do, we live 10 people to one house, we earn our way of life and we do not burden anybody,” he said, adding that while he felt welcome in the town he was aware of hostile comments about the Polish community made “behind closed doors.”

Boston residents were reluctant to talk about Brexit on a recent cold and rainy day — “There’s more to this town, there’s more to this country” one pensioner said. But reflecting on the past three and a half years, many of them said that the “Remain” movement’s reluctance to honor the result of the 2016 Brexit referendum felt like the biggest threat to the country’s democracy.

“I do worry about the divides that have arisen from Brexit, but I fear that we would have seen unrest if the Brexit decision had been reversed,” Mr. Lewis said.

Young Britons, who see Brexit as a major threat to their future, criticize older generations for being out of touch with their needs as the terms of the country’s relationship with its European neighbors are hammered out.

“I am concerned about the people who carry the perspective that as long as issues of the country aren’t harming them personally, they can remain uninformed and uninvolved,” said Eden Reyhanian, an 18-year-old student at a school in North London.

“Events within politics have made me feel as the likelihood of cohesion within our country is out of the picture, and while our nation is ideally supposed to become more unified when faced with threats of division, the opposite has occurred.”

Oscar Redgrave, a 17-year-old student in Shrewsbury, Western England, who started a pro-European Union campaign group for young people, said one of the most worrying aspects of Brexit was how it had pushed racism and discrimination into the mainstream.

“As we’ve become more divided on the subject of immigration, racism and hate crimes have become normalized, and British society has become more closed-minded,” he said. “It’s very disturbing.”

But Mr. Redgrave is still hopeful that Brexit might be one day be reversed. He hopes for an overhaul of Britain’s electoral system, which critics say favors larger political parties.

“Most young people are really for Europe,” he said. “If we get a voting system that allows us to really vote for who we want then I can see a scenario where we are back in Europe in five to 10 years. It’s possible.”

This is Microsoft’s vision for dual-screen apps on Windows 10X and...

Nintendo doesn’t have to refund digital preorders, according to European court

Notre-Dame’s Crypt and Square May Reopen in Spring

A Common Charger for All Phones? The European Union Is on...