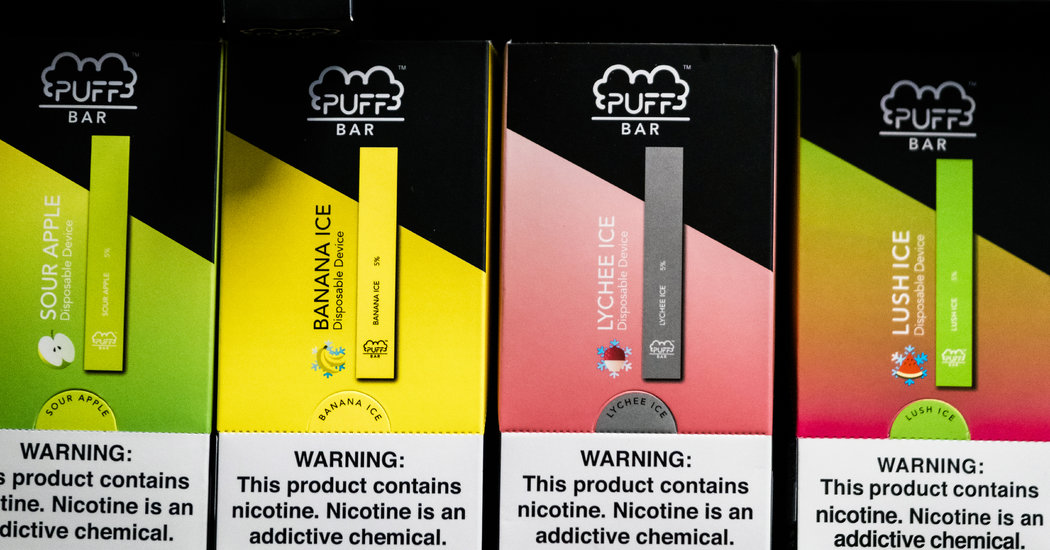 The Food and Drug Administration is banning most flavored e-cigarettes, but that isn’t keeping banana ice, sour gummy or cool mint out of the hands of McCracken County High School students.

Blame a policy loophole. When the Trump administration decided to prohibit fruit, mint and dessert flavors in refillable cartridge-based e-cigarettes like Juul, it carved out a few exceptions to mollify the vape shop owners and adult consumers who complained. The much-publicized exemption allows menthol and tobacco flavors.

But a footnote on page 9 of the new policy permits all flavors to continue to be sold in devices that cannot be refilled and are designed to be disposed of after the flavored nicotine has run dry.

Teenagers have caught on fast.

“Students were telling me that everybody had gone to Puff Bars, which are disposable,” said Lauren W. Williams, a teacher at McCracken, near Paducah, Ky. “The one we confiscated here this week is Banana Ice. Students are not using Juuls anymore because no one wants menthol or tobacco.”

Juul Labs, the San Francisco-based company that dominates the e-cigarette market, has been widely blamed for igniting the youth vaping epidemic with its fashionable, sleek devices and flavors like mango, mint and creme. The company was feeling so much pressure it voluntarily discontinued all its flavors but menthol and tobacco last fall. But the holes in the government’s flavor ban have merely opened the door to an array of competing brands that produce disposables, like Puff Bars, blu, Posh and Stig. The pre-charged, pre-filled devices are made by domestic companies and imported from China. Some have a higher nicotine level than Juul.

“It’s rampant,” Kristina Rodgers, the principal of Roosevelt High School in Seattle, said of the rising use of disposable vaping devices.

“We’re still back on Juul,” Ms. Rodgers continued, describing school administrators’ approach to policing teen vaping. But, she said, the students tell her, “‘Juul’s so yesterday, we’ve moved on.’”

She concluded: “Teens are very savvy and if they are addicted, they are going to do what it takes to continue a habit that is now plaguing their lives.”

Daniella Roth, a high school junior in Newport Beach, Calif., started vaping mint and other flavored Juuls when she was in tenth grade. About five months ago, she said, she switched to Puff Bar, which she buys from other students. Costing between $7 and $10 per disposable e-cigarette, Puff Bar is cheaper than Juul.

“For me it wasn’t about it being easier to get, it was more cost-effective. I’d have to save up $30 to buy a pack of Juul pods,” Daniella said.

“Puff came out as the new popular thing that every single kid was doing and I hopped on that fad,” she explained. “They have flavors like the Juul flavors. It’s basically like smoking a Juul.”

Daniella said she is trying to quit, but has not yet succeeded — although she is down from vaping all day long to taking just a few hits in the morning and a few more before bed. If she doesn’t vape, she said, “I get all shaky.”

He also smokes cigarettes, and says that rather than replacing traditional cigarettes, the e-cigarettes increase his cravings to smoke.

“It just feeds the habit,” he said. If you are vaping, he said, “you’re going to gradually want a cigarette.”

Bennett said that he believes teenagers would stop vaping if the flavors were not available.

“If people just sold straight tobacco flavor vapes, people would want to wean themselves off,” he said. “It’s not as enjoyable.”

Senator Jeff Merkley, Democrat of Oregon and a longtime tobacco-control advocate, said he and 29 other senators have written to the F.D.A. demanding the agency’s rationale for permitting disposables to stay on the market.

“Any administration that was serious about protecting children from nicotine addiction would realize that disposable e-cigarettes are the last thing we should be leaving on the market,” Senator Merkley said in an email. “Cheap, accessible, fruit-flavored vaping devices are tailor-made to ensnare children and teens. President Trump needs to grow a spine and enact the real flavor ban he promised — not this loophole-ridden version that was tailor-made to appease the vaping industry.”

The federal government’s 2019 Youth Tobacco Survey, released by the F.D.A. and the Centers for Disease Control and Prevention, found that a quarter of the nation’s high school students reported vaping within the previous 30 days, up from 20.7 percent the previous year and 11.7 percent in 2016. The increase in teenage vaping, along with the outbreak of a mysterious vaping-related lung disease, led the Trump administration in September to announce that it would ban flavored e-cigarettes, preferred by teenagers, imminently.

But the vaping industry and their customers fought that proposal, in conjunction with conservative organizations like Americans for Tax Reform. During that same time, to the relief of the vaping industry, the C.D.C. reported that the vast majority of patients who developed the vaping-related lung disease had vaped THC, the high-inducing chemical in marijuana. Though some of them had also vaped nicotine, only a very small portion said they had vaped only nicotine.

The F.D.A.’s final policy allowing menthol e-cigarettes to stay on the market was a compromise that many people had predicted. But the exemption for disposable e-cigarettes was unexpected.

“I was very surprised when I read the rule and saw that the F.D.A. had this footnote that does carve out a loophole,” said Kevin Schroth, a professor at Rutgers Center for Tobacco Studies. “These disposable, completely self-contained e-cigarettes like Puff Bar and others share all of the characteristics that made Juul a problem.”

In an email, Mark Smith, a spokesman for Fontem U.S. which makes blu, another popular disposable, said the company had developed a robust youth access prevention plan, including age-verification mechanisms, clear labels that say “not for sale to minors,” and other measures. It is also a sponsor of the national “We Card” program, which trains retailers to avoid selling restricted products to minors.

Neither Puff Bar nor the other companies returned inquiries seeking comment.

As the Feb. 6 effective date for the federal flavor ban nears, companies are advertising big sales on their flavors. Blu’s refillable Melon Time, Honeymoon, Mint-sation and other soon-to-be-banned flavors are now “Buy 5, get 5 free,” and “Buy 10 get 15 free.” The company has run “Stock up and save” advertisements this week in The Wall Street Journal. But the company will still sell disposable e-cigarettes in Cherry Crush, Vivid Vanilla and Polar Mint.

Regarding the disposables, Mr. Smith said, “These products are not being used by youth — which is why the F.D.A. exempted them.”

The Electric Tobacconist, an online sales site, is holding “Flavor Ban Closeouts,” on Vuse, NJoy and other flavor pods.

Mitch Zeller, director of the F.D.A.’s Center for Tobacco Products, said data show that the most appealing e-cigarettes for youths are cartridge-based products that are easy to use and easily concealable. The agency said it did not have data showing high rates of youth use of disposables, but is monitoring the issue and would revise the policy if necessary.

Meanwhile, Mr. Zeller said, under existing regulations, the F.D.A. retains the ability to take action against manufacturers and sellers of disposable e-cigarettes who fail to keep them away from minors.

“Let us be clear, under this policy if we see a product that is targeted to kids, we will take action,” Mr. Zeller said.

Meredith Berkman and Dorian Fuhrman, two of the co-founders of Parents Against Vaping, recently met with Mr. Zeller and some of his staff to discuss their concerns.

They believe that waiting for survey data about disposables, from the next annual youth tobacco survey, will result in more youths becoming addicted to nicotine.

“We have known for months that kids have been using these disposable products as it became more difficult to access some Juul flavors,” Ms. Berkman said.

“They make decisions on data and science, we understand that,” she continued. “But there must be some interim data collection, because it’s not fast enough. By the time we get the data on disposables, for all we know, there will be a new product that youth are using.”

Philip Leder, Who Helped Decipher the Genetic Code, Dies at 85

Bonkers new animals imagined with the power of Photoshop

Two New Transformers Movies Are Finally In The Works Post-Bumblebee

How Europe Turned Into a Perfect Landscape for Wildfires

How to Stop a Disease From Crossing Borders