HONG KONG — New walls are rising between China and the world as the country grapples with a fast-moving coronavirus and its mounting death toll.

Vietnam on Saturday became the latest country to try to close itself off from the world’s most populous country, barring all flights from and to China. Over all, nearly 10,000 flights have been canceled since the outbreak.

Australia joined the United States in temporarily denying entry to noncitizens who have recently traveled to the country. There are officially eight confirmed cases in the United States, including one person connected to the University of Massachusetts-Boston.

Japan also said it would bar foreigners who had recently been in the Chinese province at the center of the outbreak, or whose passports were issued there.

As the death toll increases and more countries cut off China, the economic and political crisis caused by the virus is only intensifying there, with authorities coming under scrutiny for their slow initial response. 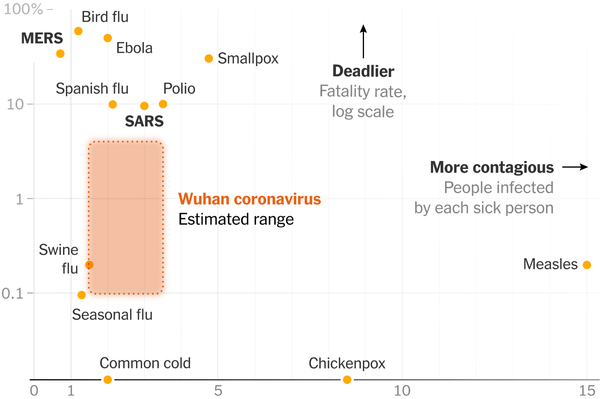 How Bad Will the Coronavirus Outbreak Get? Here Are 6 Key Factors

Here’s what early research says about how the pathogen behaves and the factors that will determine whether it can be contained.

Major businesses have started to acknowledge the effect that the virus — and China’s near shutdown — is having on their bottom lines. Earlier, Apple had said it was rerouting part of its supply chain but would shut only one store. By Saturday, it said it would close all 42 of its stores in mainland China, its third-biggest market and where it generates about one-sixth of its sales.

It was the latest move by some of the world’s biggest companies to shift supply chains and adjust operations in China.

Chinese officials have been changing course after their initially slow response to the virus.

A prominent government expert admitted that he had been wrong to say the virus was under control in early January.

And the mayor of a town near Wuhan, the center of the outbreak, was fired for negligence after the disabled teenage son of a quarantined patient died. The cause of death was still under investigation.

But the Chinese authorities also appeared to be taking tougher measures to stifle criticism, for example scrubbing the internet of an article critical of the government in The Global Times, a tabloid controlled by the governing Communist Party.

As the number of deaths and new cases rapidly rose this past week — 259 deaths and nearly 12,000 by Saturday — one by one, international organizations and foreign countries reacted.

The State Department issued a travel alert urging Americans not to go to to China because of the public health threat.

Delta, United and American Airlines suspended all flights between the United States and mainland China.

By the time the World Health Organization declared the outbreak a global health emergency on Thursday, some of the world’s biggest companies had barred their employees from any travel to China, and countries began to close their borders.

Even as some countries took drastic measures, their leaders also acknowledged the economic impact.

“It’s going to hurt us,” warned Lee Hsien Loong, the prime minister of Singapore, after announcing that the small island state would bar all Chinese visitors and foreigners who had traveled to China within the past 14 days. (The incubation period for the disease is believed to be one to two weeks.)

“China is a very big source of tourists for Singapore,” Mr. Lee told reporters after announcing the ban. Restaurants, travel operators and hotels in Singapore were all “bound to be significantly affected.”

On Saturday, Australia joined the United States and a growing list of other countries and cities that have issued travel warnings in an attempt to stem the flow of people who could be carrying the virus. The American government said on Friday that it would temporarily deny entry to noncitizens who had recently traveled to China.

Qantas, Australia’s biggest airline, canceled its mainland flights, though it said it would still fly to Hong Kong.

Taiwan said it would bar Chinese nationals from the southern coastal province of Guangdong from entry beginning Sunday and travelers who recently visited the area would be subject to a mandatory 14-day quarantine.

Vietnam, China’s neighbor along its southern border, joined Singapore and Mongolia in essentially shutting off its borders to China, banning all flights coming from mainland China, Hong Kong and Macau until May 1, according to the Federal Aviation Administration. Only flights that have received approval from the country’s Civil Aviation Authority will be allowed following the ban, which took effect on Saturday.

The Mongolian authorities also shut the border with China until March 2, while other countries and regions this past week stopped short of sealing off their borders entirely.

Hong Kong halved the number of flights from China, shut down rail service to mainland China, and also limited visas to the semiautonomous region in a move that has prompted criticism from trade unions including hospital workers, some of whom have voted to strike. They want to shut the city off from the mainland.

In a twist, Hun Sen, the leader of Cambodia, one of China’s close neighbors, emerged as a contrarian when he decided not to limit any travel and movement of Chinese tourists to his country.

He was defiant in his decision, saying that doing so would “be an attack on the Cambodian economy” and would “strain relations” with China.

“I don’t care what other countries think — Cambodia does not behave this way,” he said.

Cambodia is home to many Chinese businessmen and China is the country’s largest benefactor.

But North Korea was one of the first countries to shut its borders to visitors from China to keep out the coronavirus.

Amid the expanding crisis and growing criticism of Beijing’s strategy, a prominent respiratory expert who originally told Chinese state news media that the coronavirus was under control and preventable admitted that his choice of words had been inappropriate.

The expert, Wang Guangfa, head of the department of pulmonary medicine at Peking University First Hospital in Beijing, compared himself and other medical professionals tackling the outbreak to soldiers walking onto a battlefield.

“All the bullets are flying,” Dr. Wang said in an interview with Jiemian, a finance-focused news site founded by Shanghai United Media Group, which is controlled by the Shanghai government.

The doctor has come to symbolize how slowly China recognized the urgency of the outbreak. Dr. Wang himself contracted the coronavirus, apparently during a visit to Wuhan.

He initially said that the virus could not be spread by person-to-person contact. But 11 days later, he confirmed to state news outlets that he had the virus and that he might have contracted it during a trip to the center of the outbreak with a group of experts.

In his interview, Dr. Wang said that he had misdiagnosed his symptoms as those of flu, and that he had waited days before checking himself into a hospital. He said he had since recovered and was discharged on Thursday.

Asked why he had originally called the coronavirus “preventable and controllable,” Dr. Wang blamed limited information at the time of his Wuhan visit. A clearer picture of the virus’s transmissibility would have required “epidemiological data, which is difficult to judge,” he said.

His interview has been widely shared on Weibo, China’s Twitter-like social media platform. Some of the most popular comments have come from angry users.

Criticism about how long it took for the authorities to act has grown online. The initial reports of the virus began in early December, but it was not until late January that Chinese officials sprung into action, eventually locking down entire cities around the epicenter and halting public transport across the country during its busiest holiday travel period of the year.

China’s sudden action drew praise from the World Health Organization and other bodies overseas, but at home, anguished and angry comments sneaked past censors.

Yet not all criticism made it through the great firewall. On the Chinese internet, people complained that censors’ were working in overdrive as many articles and social media posts were deleted.

One of the starkest examples of censorship that critics pointed to was an article written by Hu Xijin, the editor of The Global Times, the nationalist tabloid of the Communist Party.

Mr. Hu wrote that the heads of the national health commission and the Chinese Center for Disease Control and Prevention should take responsibility for the delay in reporting the seriousness of the epidemic.

A few hours after it was posted on Friday, his article was deleted from The Global Times’s website.

How to build and upgrade your own extreme gaming PC

Kevin Love, Amid Trade Talk, Is Finding a Way to Fit...

Belmont Stakes to Run June 20 as First Leg of Triple...

Kashmir, Under Siege and Lockdown, Faces a Mental Health Crisis