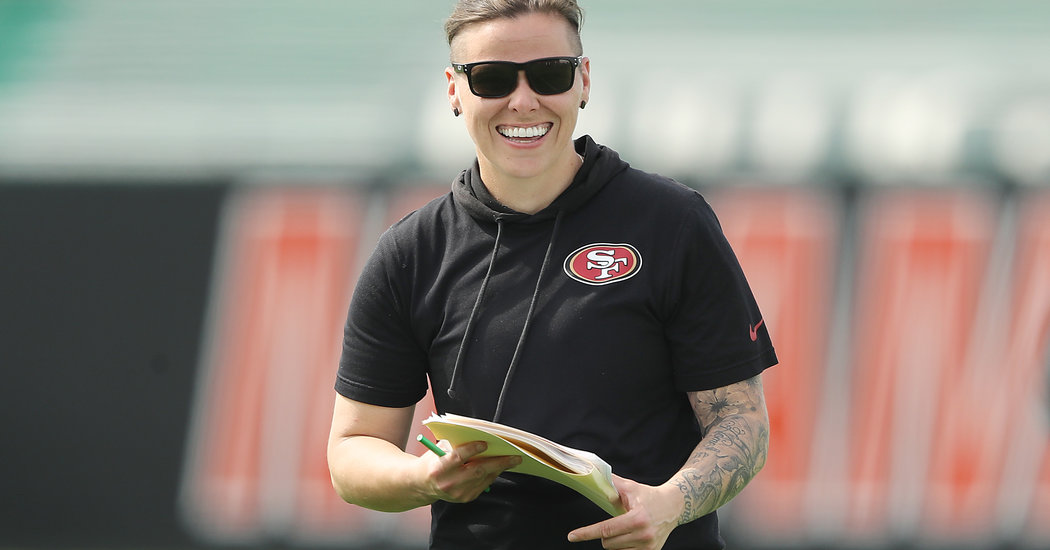 MIAMI — Katie Sowers did not come to the Super Bowl to be a token for the N.F.L., for the San Francisco 49ers, or for the news media. She came to coach.

Sowers was not the first woman to coach in the N.F.L. — that was Jen Welter, who joined the Arizona Cardinals in 2015 — but in order to reach the league, Sowers needed something usually afforded only to men who have played college football: an opportunity.

That ultimately came from a fifth-grade basketball court. Sowers was coaching a girls’ team in Kansas City, Mo., and became friendly with Scott Pioli — or, as she knew him when they first met, Mia’s dad.

Pioli, whose daughter played on Sowers’s team shortly after his tenure as the general manager of the Kansas City Chiefs, saw potential in her. Sowers had played and coached in the Women’s Football Alliance and seemed to have a lot of football smarts, especially considering she was not yet 30. He realized that Sowers needed a chance prove herself.

Pioli thought of the Bill Walsh Diversity Coaching Fellowship, a program meant to increase the number of minority coaches in the N.F.L. After moving on to become the assistant G.M. in Atlanta, Pioli asked Falcons Coach Dan Quinn to consider Sowers for the 2016 class of the fellowship.

Sowers, then a high school athletic director, used vacation days to work with the Falcons at training camp. Her foot was in the door.

“Young men always get the opportunity to be around people with the decision-making power,” Pioli said. “This time, it happened for a woman.”

Sowers’s path was helped by serendipitous connections, said Sam Rapoport, senior director of diversity and inclusion for the N.F.L. Rapoport pointed to another program, the Women’s Careers in Football Forum, a two-day event held at the league’s player scouting combine in Indianapolis each February.

“A lot of firsts emerge from the program,” Rapoport said.

There are now three full-time female coaches in college football, Rapoport said, all of whom secured their first opportunity through the forum. In 2019, 55 percent of the participants were women of color.

“You don’t want to put someone in the position where they feel underqualified or not ready,” Rapoport said. “N.F.L. coaches are now asking for female candidates, and we need them.”

For all the benefits of the fellowship and forum, and for all the talk of opportunity and representation, becoming a coach in professional football — or even at a high level of the N.C.A.A. — often demands not only financial stability, but additional financial support.

Sowers confronted this issue immediately after her fellowship, when she was offered a 10-month N.F.L. internship that paid $10 an hour. She would be allowed to work only 40 hours a week. She was in her late 20s. She had a mortgage and a full-time job. She paused to weigh her options.

Pioli stepped in, paying her rent in Atlanta so she would be able to afford her mortgage, Sowers said in an interview with NPR in March.

“You have to have people believe in you,” said Mary Jo Kane, the director of the Tucker Center for Research on Girls and Women in Sport at the University of Minnesota. “Progress in women’s sports didn’t happen because on the 19th hole at some exclusive country club male athletic directors said, ‘Oh, my God, I’m so upset that women don’t have 50 percent of sport!’ That’s not how change happens.”

Female coaches and athletes, Kane continued, “are saying, ‘Just give me the opportunity, and I’ll show you what I can do.’”

Sowers did not waste time, impressing Kyle Shanahan, then the Atlanta Falcons offensive coordinator, in 2016. The next season, when he became the 49ers head coach, he hired Sowers to join him.

“It’s important for all to know that dreams are achieved by first finding someone who sees your worth and value, regardless of your gender, and takes the necessary steps to clear a path, even on the path less traveled,” Sowers wrote on Facebook in August 2017, thanking Pioli and sharing the news that she was accepting a coaching job in San Francisco. “The most important words you can ever tell someone is ‘I believe in you.’”

Now Sowers is in headlines around the world as a “first” at the Super Bowl. And as the news media swarm players asking them about their strategy, their plans and their coaching staff, Sowers’s gender and sexuality have taken a back seat to her acumen. She’s a great coach, they say. “A bulldog,” 49ers quarterback Jimmy Garoppolo said.

“The focus has been on her talent, her understanding of the game and her knowledge of the game,” Kane added. “What’s remarkable to me is how unremarkable it has been. And that is the enormous cultural shift.”

For change to keep coming, the pipeline needs to grow, Rapoport explained.

“I’m a big believer in representation, and the adage ‘You can’t be what you can’t see,’” Rapoport said. “Girls are now growing up seeing that women are coaching, so the pipeline will naturally get bigger.”

On Sunday, some 100 million viewers will see something no one has seen before: A female coach, and an openly gay coach, leading a group of football players in the biggest game of their lives.

With No Braille Option, a Blind Man Failed His Citizenship Exam

Tim Duncan to Springfield? Take It to the Bank

How to try on lipstick shades with Pinterest's new AR makeup...

Five Years After a Nasty Crash, a Symbolic Layup for Josh...