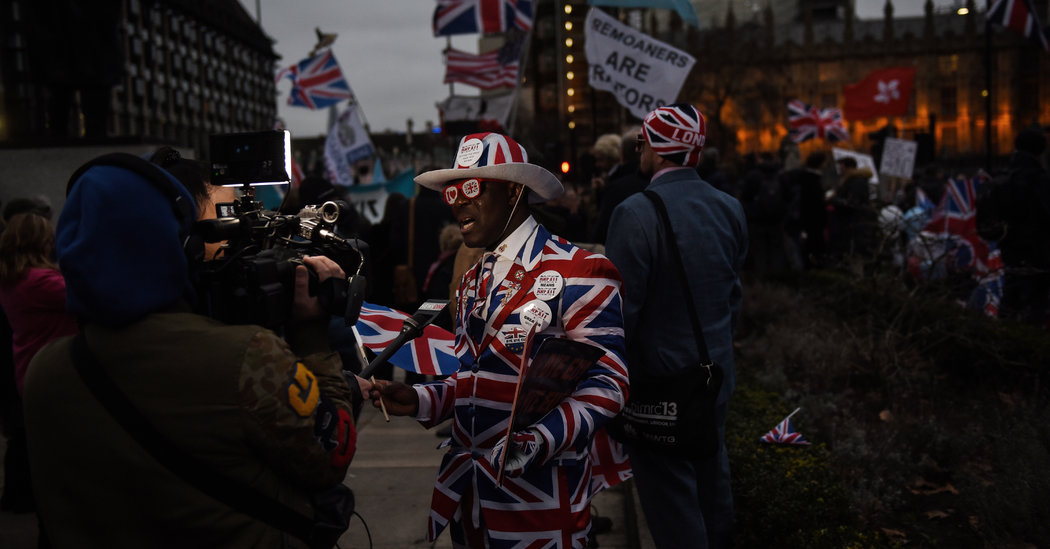 LONDON — Britain’s departure from the European Union on Friday drew a mournful reaction from many people who have long viewed Brexit as consigning their country, once the vanguard of Europe, to a future of economic mediocrity and geopolitical irrelevance.

But there are many others who view Brexit as a day of liberation, when Britain, unshackled from the bureaucracy of Brussels, will stride into a future of economic innovation and vigorous, cleareyed politics — a “moment of real national renewal,” in the words of Prime Minister Boris Johnson.

That positive case for Brexit will now be tested, and it is prompting even those who ardently opposed it to wrestle with a question they had mostly dismissed during three and a half years of debate: What if it works?

“Disruptive change can be beneficial for a country,” said Tony Travers, a professor of politics at the London School of Economics. “That is, in a sense, what Brexit has accomplished.”

Britain is no stranger to disruptive change, of course. After the end of World War II, it adjusted to the end of empire by embedding itself in an Atlantic alliance and building a European-style welfare state. In the early 1980s, Margaret Thatcher led a free-market revolution that dismantled parts of that state and nurtured a British nationalism that fully flowered in the wrenching debate over Brexit.

Now, Britain is remaking itself yet again, cast off from Europe and facing an uncertain future in which the shape of its society and economy, and its place in the world, are still very much up for grabs.

By giving the Brexiteers a chance to put their ideas into action, Professor Travers said, British politics could be reinvigorated. With the country shorn of its links to the European Union, Mr. Johnson and his aides will not be able to blame Britain’s shortcomings on anyone else. British voters will get to hold their leaders accountable.

The economic case for Brexit is harder to make. Most experts said Britain’s decision to leave the bloc was likely to deprive the country of significant additional growth over the next decade or so. But the warnings of catastrophe are probably overstated, and it is hard for people to miss what they never had.

Britain, experts said, is likely to grow in line with the rest of Europe over the next several years — a growth rate that is hardly sparkling, but likely to be a shade higher than those of Germany or France.

If that happens, and Britain is able to establish a stable trading relationship with the European Union, Brexit’s champions may claim a measure of vindication. That is even more likely if, as many experts predict, the bloc enters a bumpy stretch economically.

“Boris Johnson’s argument is that 10, 15, or 20 years from now, we’ll look back and say, ‘Getting out was in our national interest,’” said Mujtaba Rahman, a managing director at the political risk consultancy Eurasia Group. “The jury is out on that, but if he can pull this off, there are reasons to think Britain will prosper.”

The Brexiteers are far less guarded. They speak of a “global Britain,” bursting with technological innovation, unencumbered by regulations — an agile free agent, ready to do business with the world. Britain, they said, would strike lucrative trade deals and become a magnet for foreign investment.

“It starts with free trade,” said Patrick Minford, an economist at Cardiff University. “Everyone talks about the E.U. as if it is a bastion of free trade, but it’s not. We want to trade freely with everybody, especially the United States.”

Professor Minford contends that Britain could add 8 percent to its gross domestic product over the next decade if it is able to strike down all trade barriers, and 4 percent if it is able only to eliminate a portion of them. There could be further gains from technological innovations in industries like artificial intelligence, he said.

Having taken back control of their affairs from the unelected bureaucrats in Brussels, the British people will be able to enact rules that suit them, not 27 other countries. They will be rule makers, not rule takers, in a popular phrase often used by Brexiteers. That, they said, is a stirring victory for sovereignty.

“The elemental case for Brexit is the democratic one,” said Daniel Hannan, who just stepped down as a Conservative member of the European Parliament. “Having got power back from Brussels, we should not let it fester in Whitehall. This requires not just leaving the E.U. but reviving our domestic democracy.”

Even some of those who lobbied to stay in the European Union acknowledge that in the post-Brexit era, the debates in Parliament could become more rational — focused on what kind of society and economy Britain now wants to have.

They also concede that Britain’s membership in the European Union was deeply unsatisfying. Because it refused to join the monetary union, Britain was always going to feel left out of Europe’s innermost councils. After the adoption of the Maastricht Treaty in 1993 — which formally established the European Union — Europe became as a much a political union as an economic club, something that many in Britain never accepted.

“We opted out of bits and pieces of it, so we were never at the top table,” said Jonathan Powell, who was a chief of staff to former Prime Minister Tony Blair. “If you’re going to be a halfhearted partner, then there’s no point to being in it at all.”

Still, Mr. Powell said, it was fanciful to assume that by leaving the European Union, Britain would be able to discard the bloc’s rules and regulations. Other nonmembers, like Norway or Switzerland, adhere to European standards as a condition of trading with it. That will be particularly true in Northern Ireland, which will stay closely aligned with a maze of European rules and regulations.

Britain, the critics say, will continue to be a rule taker. It just will no longer have a seat at the table where those rules are drafted.

Despite his landslide election victory last December, Mr. Johnson has not really articulated the pro-Brexit case. He has spoken in general terms about reunifying and reviving the country but has yet to lay out an agenda for how Britain plans to exploit its independence for economic or political gain.

Partly that may reflect Mr. Johnson’s determination not to be triumphalist after a debate that divided the country. Partly, his critics say, it reflects the prime minister’s lack of fixed convictions. He used Brexit more as a vehicle to amass power, they said, than to impose a particular worldview.

Mr. Johnson must also balance the different parts of his Brexit coalition.

Voters in the Midlands and the North of England, where many districts abandoned the Labour Party to embrace Mr. Johnson’s promise to “get Brexit done,” have a very different vision of what Brexit means from the free-market evangelists in London, who want to remake Britain as a kind of Singapore-on-Thames — an enclave with little regulation and low taxes.

“The pain will be felt differentially,” said Mr. Powell, the former chief of staff to Mr. Blair. “Sunderland and other places that voted for Brexit will be hardest hit,” he said, referring to the industrial city in northern England where the early returns from the June 2016 referendum foretold that the country would vote to leave the union.

With Britain likely to hammer out some sort of trade agreement with the European Union, the most alarmist predictions about Brexit — food shortages, trucks lined up for miles at ports — are not likely to happen. Rather than a triumph or a tragedy for the country, Brexit may end up being a long twilight.

“We’re not going to go off a cliff,” Mr. Powell said. “It will be more of a glide path. Britain is going to have to come to terms with being a small country.”

The Test a Deadly Coronavirus Outbreak Poses to China’s Leadership

Pence’s Trip Lets Him Change the Topic, but Impeachment Intrudes

Amid Trump’s Trial, Pompeo Visited Ukraine. Here’s How It Went.