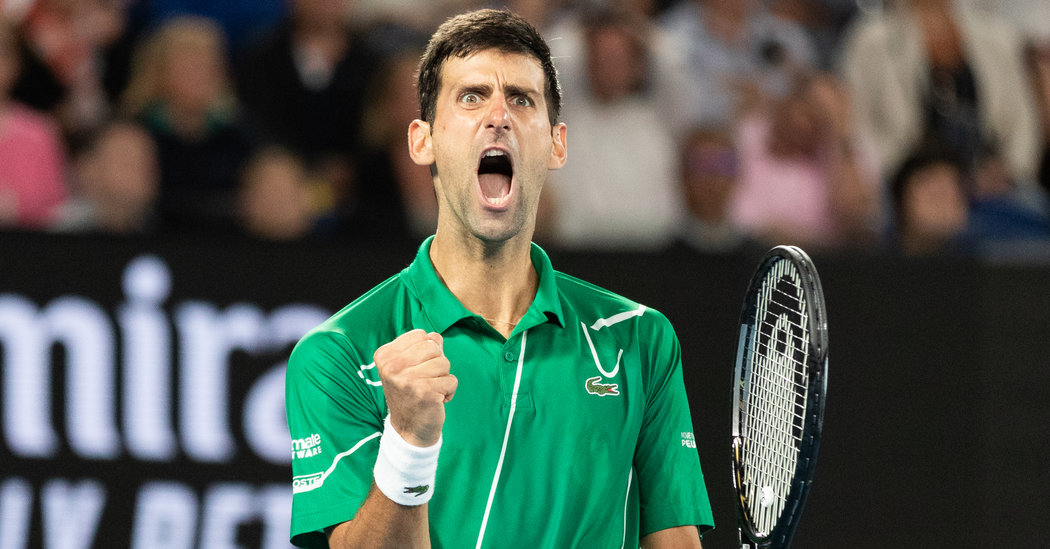 MELBOURNE, Australia — It was a highly unusual Australian Open, beginning with the prologue.

The qualifying tournament was disrupted because of smoke from the bushfires that have devastated large swaths of the country. A new team event, the ATP Cup, changed players’ routines and schedules in January, the start of a new season.

The death of Kobe Bryant and his daughter Gianna on Jan. 26 in a helicopter crash, which killed nine people in Los Angeles, was felt by many during the middle of the tournament in Melbourne, including Bryant’s friend and occasional mentee Novak Djokovic.

“I’ve been watching videos of Kobe and his family every single day since that happened, and it’s devastating,” Djokovic said.

But after all the upheaval and unexpected emotions, the conclusion of the Australian Open was reassuringly familiar for Djokovic.

He has won at the Australian Open more than anywhere in his long career. And on Sunday night, under clear skies and an open roof, he extended his men’s record by securing an eighth men’s singles title with a 6-4, 4-6, 2-6, 6-3, 6-4 victory over Dominic Thiem.

“Definitely my favorite court and my favorite stadium in the world,” Djokovic said after the mood-swinging final, which lasted 3 hours 59 minutes.

The dig-deep victory allowed Djokovic, 32, to reclaim the No. 1 ranking from Rafael Nadal and to tighten the gap with his archrivals Roger Federer and Nadal in the long-distance race to see who will finish with the most Grand Slam singles titles.

Federer, 38, holds the men’s record with 20. Nadal, 33, has 19. Djokovic, the youngest of the three, has 17, with the record squarely in his sights, even if he is finding it increasingly challenging to chase trophies around the world as the father of two young children. His family did not make the trip to Australia with him this year.

“I’m kind of going through these moments when I’m on the road just thinking, do I need to be away for so long?” Djokovic said in a recent interview. “Because I also don’t want them to be part of this touring, so to say, entourage, because it’s just taking away some of the things that are healthier and better for them.”

But any hesitation did not keep Djokovic from fulfilling his goals in Australia. After sweeping all of his singles matches and leading Serbia to the title at the ATP Cup in Sydney, he traveled to Melbourne, rested for a few days and proceeded to work his way through the draw, dropping just one set before the fifth-seeded Thiem pushed him to the limit.

Thiem, a 26-year-old Austrian with thunder in his groundstrokes and highlights in his dark hair, has become a clear threat to the Big Three, beating each of them multiple times over the last three seasons.

He had won four of the previous five matches against Djokovic. But he has yet to defeat him on an outdoor hardcourt. He confidently built a two-sets-to-one lead on Sunday as Djokovic struggled with his consistency and energy levels, but Thiem could not slam the door on a comeback.

Thiem appeared to have command of the match when he had a break point on Djokovic’s serve at 1-1 in the fourth set that Djokovic saved by boldly serving and volleying. “One point and probably one shot separated us tonight,” Djokovic said. “It could have gone a different way.”

Thiem did not get another chance to break serve in the fourth set, and played one of his shakiest games of the match to drop his own serve at 3-4.

They were soon into a fifth set, and Djokovic took quick command, breaking Thiem’s serve in the third game. He saved two more break points in the next game to stay in front, again rushing the net under pressure.

Thiem’s last real chance to close the gap came with Djokovic serving at 4-3, but at 15-30 Djokovic reeled off three straight points.

“I think there’s not much to change,” Thiem said. “In the last two sets, I definitely gave everything I had. Novak is part of three guys who are by far the best players ever who played tennis. If you play a Grand Slam final against him, it’s always going to be a match where very small details are deciding.”

Based on the evidence, the hardest task in men’s tennis is defeating Nadal at the French Open. Nadal has a record 12 singles titles at Roland Garros and has only lost two matches there. But the second-hardest task must be beating Djokovic down the stretch at the Australian Open.

He has never lost a semifinal and is now 8-0 in finals, after winning his second straight final here. Last year, he routed Nadal in straight sets for the title in one of the finest performances of his career. On Sunday, his form in the opening games looked similar. He stormed to a 4-1 lead, winning points with deft drop shots, powerful groundstrokes and penetrating first and second serves. But Thiem, unlike Nadal, found a way to weather the early storm and get back to 4-4 before Djokovic closed out the set.

It was a taut, tense affair from there, although both players rarely peaked in unison and both finished with more unforced errors than winners. The second set turned Thiem’s way after Djokovic was called for consecutive time violations by the chair umpire, Damien Dumusois, when serving at 4-4.

The second violation cost him a first serve. Thiem went on to break, and Djokovic, fuming, patted Dumusois’s feet as he passed in front of his chair. “Great job, man,” Djokovic said. “You made yourself famous. Well done.”

It is technically forbidden to touch an official, but Dumusois chose not to penalize Djokovic.

“I thought the second violation was not necessary, the first one fine no problem, the second one just not necessary under the circumstances,” said Djokovic, who said he was unaware of the ban on touching an official.

“I thought it was a nice, really friendly touch,” he said much later, grinning at his postmatch news conference, which started at 2 a.m. Monday.

Thiem served out the second set and swept to the third as Djokovic looked increasingly sluggish and off balance. With Thiem leading, 4-1, Djokovic received a visit from the medical staff but did not take an injury timeout.

He said he was feeling unusually low on energy and experiencing some dizziness and said he was informed by a doctor that he was likely dehydrated. “To be honest, I still don’t understand the reasons that happened,” he said of his physical issues.

But Djokovic often has looked down and out in his long career only to find a way back to a more sunlit place. So it went on Sunday as he rallied to extend his dominance and prevent the younger generation from breaking through.

Thiem, who lost the last two French Open finals to Nadal, is now 0-3 in major finals; no active men’s player under age 31 has won a Grand Slam singles title.

The Big Three have won 13 majors in a row and will remain in the top three in the rankings on Monday, with Thiem at No. 4. But as Djokovic and Thiem made clear in their postmatch speeches, there are more important matters than rankings and tennis.

Djokovic, with the men’s singles trophy back in his grasp, turned his thoughts to Bryant and his daughter.

“This is a reminder to all of us we should stick together more than ever,” he said.

A Lucky Country Says Goodbye to the World’s Longest Boom

From the Afghan Peace Deal, a Weak and Pliable Neighbor for...

Wait, Google isn't working with the US to build a coronavirus...

Netflix has been looking for franchises, and The Witcher may be...

When All You Ever Wanted Is No Longer Enough

‘No More Hugging, No More Kissing.’ At Home in Hong Kong...