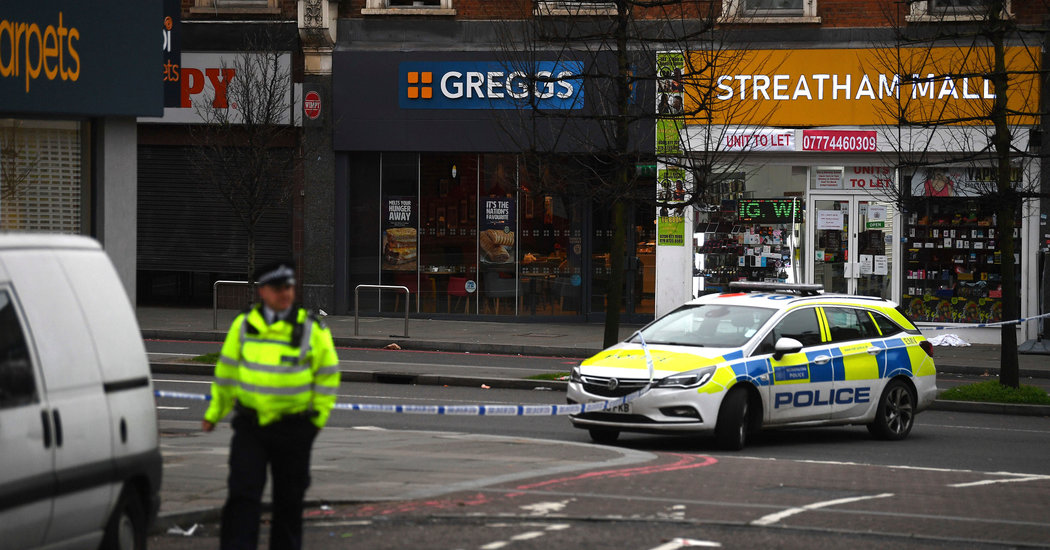 LONDON — A man armed with a knife and wearing “hoax” canisters strapped to his body was shot and killed by the police in South London on Sunday after he was suspected of stabbing two people on Sunday. The authorities described the attack as an “Islamist related” act of terrorism.

The attack in London came more than three months after another terrorist-related spree near the London Bridge in November added to the litany of assaults Britain has endured in recent years, testing the nerves and fortitude of its residents.

Local news reports said the man, who was not immediately identified, had been under active surveillance when two pedestrians were stabbed on Sunday in Streatham, about five miles south of Central London.

The Metropolitan Police said that officers from “a proactive counterterrorism operation” quickly responded to the attack and killed the suspect around 2 p.m. local time. He was wearing a device strapped to his body, but it was later found to be a “hoax,” a police statement said.

The man was pronounced dead at the scene, Lucy D’Orsi, the deputy assistant commissioner in specialist operations, said on Sunday night. Images on social media showed the man’s body lying on the pavement outside a pharmacy on Streatham High Road, while at least two officers pointed guns at him.

The stabbings unfolded on Streatham High Road, a busy thoroughfare filled with shops, a movie theater and cafes, and milling with crowds. Witnesses told reporters they had seen what appeared to be plainclothes officers chasing and shouting at a man before hearing shots.

Gulled Bulhan, 19, said that he had been crossing the street when he saw a man with a machete “and silver canisters on his chest” being chased by what appeared to be an armed undercover officer, according to the BBC.

Karker Tahir, who worked at a shop nearby, said that the officers asked the man to halt before they shot him.

“They kept telling him, ‘Stop, stop!’” Mr. Tahir told Sky News. “But he didn’t stop, and then I saw that they shot him three times,” he said. He added that the police told him and a colleague that “you have to leave the shop because he has a bomb in his bag.’”

Three people were injured during the confrontation, and one man was hospitalized with “life-threatening” injuries, according to the police. A woman was also wounded, and another woman was believed to have been injured by glass after officers discharged their weapons, the police said.

A video circulating on Twitter showed what appeared to be at least two plainclothes officers drawing their weapons as they took cover behind a police car. A flurry of yellow ambulances and police cars with loud sirens and blinking lights also flooded the street.

The speed with which the police declared a terrorism-related attack on Sunday stood in stark contrast to their announcements after previous attacks, when the authorities took hours or days to say that a terrorist assault had taken place.

David Videcette, a former British counterterrorism detective, said on Sunday that though the investigation was still in its early stages, he believed that the police officers who quickly responded to the stabbing had been part of a focused surveillance operation.

The Metropolitan Police’s counterterrorism unit was leading the investigation into the attack, according to Ms. D’Orsi.

The assault on Sunday had echoes of the London Bridge attack in November, when Usman Khan, a 28-year-old Muslim man who had served eight years in prison for his involvement in a plot to bomb the London Stock Exchange, killed two people near the bridge.

During the attack, he wore a fake suicide vest, which experts have said is often meant to cause panic in members of the public and to keep law enforcement at a distance. He began stabbing people, the police said, after having participated in a conference on prison rehabilitation at a venue called Fishmongers’ Hall on the north bank of the River Thames.

His attack ended when he was rushed by several men — one wielding a fire extinguisher and another brandishing an ornamental whale tusk torn from the wall of the hall — and the police shot him.

After the London Bridge attack, the British government said that it would toughen terrorism sentences and end early release for serious offenders. Prime Minister Boris Johnson also declared that “this country will never be cowed or divided or intimidated by this sort of attack.”

On Sunday evening, Mr. Johnson thanked the emergency services on Twitter and wrote, “My thoughts are with the injured and all those affected.”

Sadiq Khan, the mayor of London, condemned the attack in a statement on Sunday. “Terrorists seek to divide us and to destroy our way of life — here in London we will never let them succeed,” he said.

The United States Embassy in Britain urged people on Twitter to avoid the area.

The current terrorism-related threat level in Britain stands at “substantial,” meaning that an attack is “likely,” according to the country’s Security Service.

Streatham is a relatively unusual location for a terrorist attack in London. It is a lively, gentrifying suburb of southern London between the district of Brixton and the borough of Croydon. But it has no famous landmarks and was described as “an area of quite high poverty” by Mr. Videcette.

Other terrorist attacks in the British capital have taken place in more central boroughs.

Bell Ribeiro-Addy, a member of Parliament from Streatham, told Sky News on Sunday that it was “shocking” that such an attack would happen in the area. But she called it an “isolated incident” and said, “Streatham is a resilient community.”

Fortnite will let players mute the Rickroll emote in order to...

Jeff Bezos bought the most expensive property in LA with an...

Samsung's crazy AirDresser is a wardrobe that keeps your clothes clean

Apple TV Plus’ The Banker will hit theaters in March after...