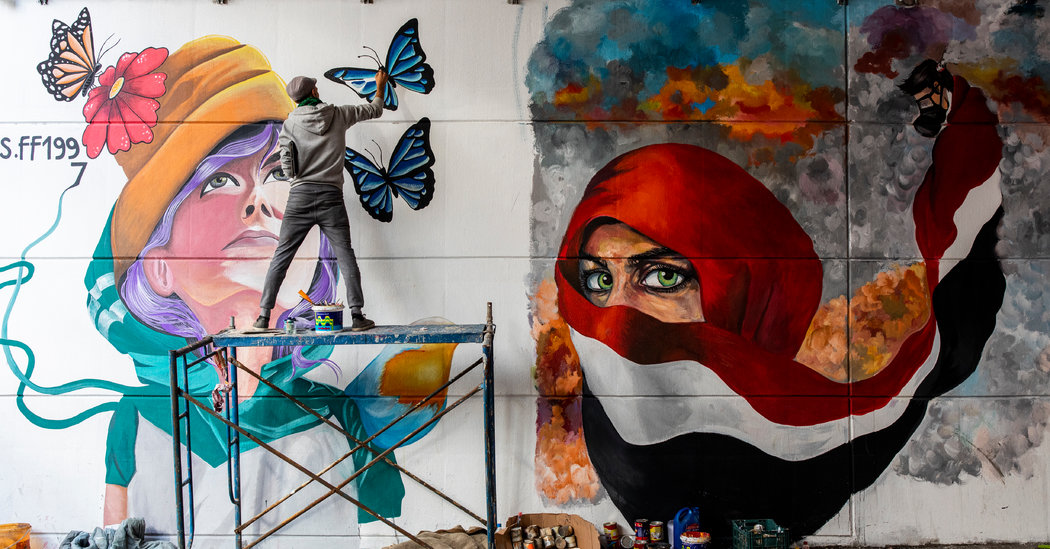 BAGHDAD — Hollow-cheeked and shivering slightly in jeans he had outgrown, Abdullah stood in an unfinished parking garage, transfixed in front of a mural whose meaning he was eager to decode for a visitor.

“See, the man in the middle, he is asking the security forces, ‘Please don’t shoot us, we have nothing, nothing.’” Abdullah said the final word twice for emphasis as he earnestly studied the black-and-white image on the wall.

Drawn in charcoal in a socialist realist style, the mural, more than 12 feet long, showed a group of men walking forward and carrying their fallen friends in their arms. The men depicted were unmistakably Everyman laborers, with rough clothes and strained faces.

Abdullah, 18 — a former cleaner in a hospital who asked that his surname not be used because he feared retribution for his involvement in anti-government protests — is now an unofficial art guide to one of the most unlikely galleries imaginable: a 15-story shell of a structure, known locally by all as the Turkish Restaurant building, that looks over the Tigris River. It is the self-declared stronghold of Iraqis who oppose the country’s current leadership.

Covered on all sides by banners with messages to the government, to the security forces and to the world, the building looks like a ship about to set sail, with the slogans written on white cloth ballooning in the wind.

The first five floors have become one of the half-dozen major art venues that have sprung up in Baghdad around the protests as painters — trained and untrained — have turned walls, stairwells and littered parks into a vast canvas.

Where did all this art come from? How is it that a city where beauty and color have been largely suppressed for decades by poverty, and by the oppression or indifference of successive governments, suddenly came to be so alive?

“You know, we have many thoughts about Iraq, but no one from the government ever asked us,” said Riad Rahim, 45, an art teacher.

The city’s creative hub is Tahrir Square. Art covers the underpasses that run below it, the green space behind it, and the streets leading into it.

The paintings, sculptures, photographs and shrines to killed protesters are political art of a kind rarely seen in Iraq, where art has been made for at least 10,000 years. It is as if an entire society is awakening to the sound of its own voice, and to the shape, size and sway of its creative force.

“In the beginning this was an uprising, but now it is a revolution,” said Bassim al-Shadhir, an Iraqi-German who goes back and forth between the two countries and has participated in the protests. “There is art, there is theater, people are giving lectures and distributing books — giving them away for free.”

Mr. al-Shadhir, an abstract artist with a degree in biology, painted his contribution to the scene on a wall on Sadoun Street, one of the capital’s broadest thoroughfares. It shows a man shot by the security forces, the blood pouring out of his heart in a vast pool, too large to be hidden or washed away by the masked military man standing behind him.

Nearby a mural begs the United Nations to rescue Iraqis. Another shows a map of Iraq inside a heart and says, “Oh my country, don’t feel pain.” There are two or three murals depicting lions, a symbol of Iraq dating from the Assyrian period and one that protesters have adopted.

There has been little if any new anti-American messages in the paintings in recent days, even though there is more anti-American feeling in Baghdad since the United States last month assassinated Maj. Gen. Qassim Suleimani, the head of Iran’s Quds force who was visiting Iraq.

One reason may be that there are already several murals that have anti-American and anti-Israeli messages. Another is that by now, there are so many walls covered with art, that it is hard to find empty space to add anything new.

The artistic subjects and styles on view show how much a younger generation of Iraqis has been influenced by the internet, discovering there images that resonate with them and then drawing them with Iraqi touches.

Rosie the Riveter has an Iraqi flag on her cheek; Vincent Van Gogh’s “Starry Night” has the Turkish Restaurant building in place of a cypress tree. Some paintings feature comic book characters, but wrapped in the Iraqi flag, the uniform of the protesters.

There are echoes of 1960s Pop Art in a painting of the Turkish Restaurant building with a red tuk tuk flying out of the roof. The tuk tuk is the protesters’ mascot, a diesel-fueled, three-wheeled vehicle that requires no license to drive and has become the unofficial front line ambulance, bearing the wounded to the first aid tents.

More than 500 protesters have been killed and thousands more have been injured.

Trees are another common subject, with painters in different locations in the Turkish Restaurant building drawing images of falling leaves.

“This tree is Iraq and I am going to write on each leaf the name of one of those martyred by the security forces,” said Diana al-Qaisi, 32, who trained as an information systems engineer but now works in public relations.

Zainab Abdul Karim, 22, and her sister Zahra, 15, had a darker vision. Their tree is a black silhouette standing in a cemetery, each grave representing one of the protesters killed by the security forces.

More individualized portraits of those killed are also a common subject.

The small park behind Tahrir Square has been divided by tents, one of which has become a steadily expanding portrait gallery with photographs of those who have been killed by the security forces. People walk along the memorial quietly, looking at each of the faces, occasionally tears welling up when they see one they recognize.

The country is witnessing an expressive flowering in more than the visual arts.

More than a dozen songs have been written for the protests and circulate nonstop on social media. Luminaries of the Iraqi arts — actors and actresses, as well as musicians, painters and sculptors — came together to record a tribute to the fallen protesters.

They had finished three — the Al Hadba minaret in Mosul, which was destroyed in the fight with the Islamic State; the ziggurat of Samarra; and the Turkish Restaurant building. They were working now on the Ishtar Gate, which once stood in ancient Babylon.

Their tools were foam, toothpicks, box cutters and spray paint for the background color, paintbrushes for the calligraphy.

“We want to express what the Iraqi civilization means,” Mr. Rahim said. “We want to send a message to the world that this is our culture, we are educated, we are painters and poets, musicians and sculptors, this is what it means to be Iraqi.”

“Everyone thinks Iraq is all wars and fighting,” he added.

Outside the still unfinished Turkish Restaurant building — so named because some 25 years ago it housed a Turkish restaurant on the ground floor — Hussein Abdul Mufsin, 25, was finishing a mural on Sadoun Street. He had already painted four others — a far cry from his usual work as a house painter.

Two murals depicted silhouettes of protesters trying to scale the barriers that divide them from the security forces. But today his primary painting goal was not art, but life. He was painting the lines that delineate the street’s edges to keep cars from veering onto the curb.

“I brought my reflecting paint today from home because at night the government turns off all the electricity and the tuk tuks carrying the injured cannot see the edge of the road and could crash,” he said.

Why was he doing this? Shouldn’t it be the city’s responsibility?

“You could call it self-financing,” he said, looking down shyly. “Or maybe this is patriotism.”

SoftBank May Not Buy $3 Billion in WeWork Shares

The 10 Best Performances In The Marvel Movies So Far

‘The Only Choice Is to Wait for Death’