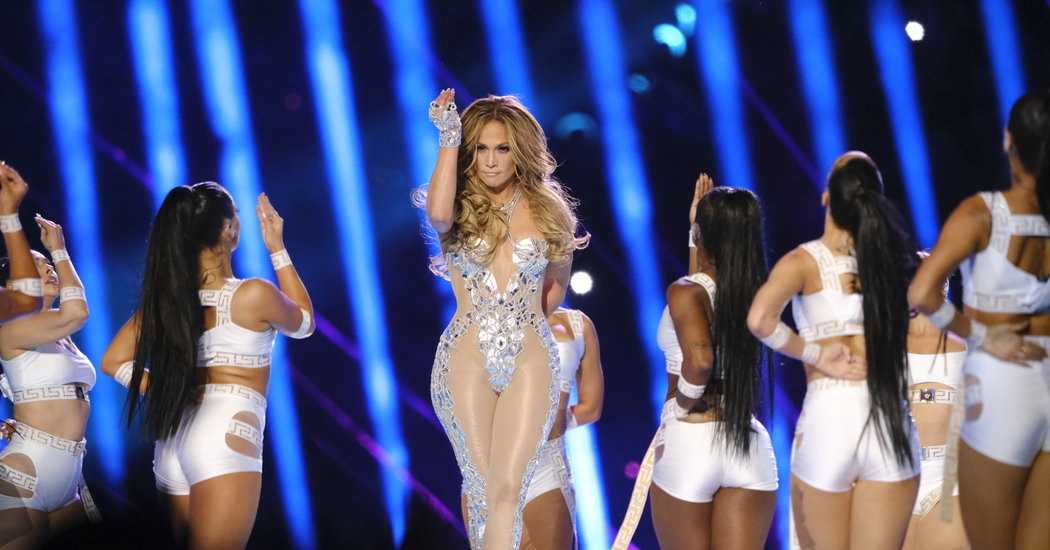 Fifty years between wins for the Kansas City Chiefs, and 50-year-old Jennifer Lopez, whose halftime performance in a series of barely-there Versace bodysuits sent social media into something of a meltdown.

More than four decades ago, Gloria Steinem crafted an aphorism that went down in history when, on her 40th birthday, a reporter told her she did not look her age — and she responded: “This is what 40 looks like.”

Well, on Sunday Ms. Lopez showed the world what 50 looks like — at least her version of it.

in a divided nation the one thing we can all agree on is J. Lo deserves an Oscar nom just for looking like this at 50 #SuperBowl pic.twitter.com/x9qw4NgSFA

There hadn’t been this much excitement over a woman flaunting her age in public since Keanu Reeves took Alexandra Grant, a silver-haired 46-year-old artist, to the Los Angeles County Museum of Art gala last November.

And fashion hasn’t been used in such a pointed way during the Super Bowl since Beyoncé referenced the Black Panthers in outfits and imagery during her performance of “Formation” at the 2016 game.

(Indeed, despite the brands involved with the sporting event over the last few years — Givenchy for Madonna, Saint Laurent for Bruno Mars, Moschino for Katy Perry — the fashion moment often seems besides the point.)

In September, Ms. Lopez had hinted at what was to come when she strutted down the Versace runway during Milan Fashion Week in a dress that was a homage to the navel-baring gown she wore at the Grammys 20 years ago. That got everyone’s attention — if they hadn’t already seen her star turn in “Hustlers.” Though seeing something in person versus onscreen is already different.

But this time she and Donatella Versace cooked up a series of quick-change looks that segued from black leather chaps-and-moto-jacket bodysuit, revealed when Ms. Lopez ripped off her hot pink ball skirt in the first few seconds of her performance; to sheer mirror-shard number; to booty fringe (with a banner showing the American flag on one side and the Puerto Rican flag on the other, used as a shawl). The various looks were embellished with 75,000 Swarovski crystals, what were described as “ethically sourced feathers” and took, according to Versace, more than 700 hours to make (the mirror bodysuit) and more than 900 hours (the leather one).

Yes, the outfits were a little silly. Yes, they were racy (though they did show less skin than Adam Levine revealed last year when he went topless during his halftime Super Bowl show). Yes, Shakira, the other halftime star, also wore a teeny tiny micro skirt with lots of sparkling fringe by Peter Dundas — and yes, she’s 43.

But the total J. Lo effect was kind of mesmerizing: an in-your-face demonstration of a woman glorying in her own physicality, and a dare to anyone who might render judgment based on a number.

Since Ms. Lopez was famously snubbed by the Oscars, she won’t necessarily be on the red carpet next weekend, so it’s a good thing she laid down the gauntlet now.

In the meantime, it’s worth pointing out that Ms. Lopez is currently fashion’s favorite celebrity, possessed of not just a Versace contract but two others (Coach and Guess). This is no small thing in an industry famously obsessed by youth.

And it suggests that it may be time for all of us to rethink those damning words: “Dress your age.”

Best upcoming Xbox One games to look forward to in 2020

The Batman's Zoe Kravitz Has Some Great Reasons For Wanting To...