As China grapples with a mysterious coronavirus outbreak that has killed more than 420 people and sickened thousands, the country’s 1.4 billion people are asking what went wrong. Senior officials are engaging in an unusually blunt display of finger pointing.

So many officials have denied responsibility that some online users joke that they are watching a passing-the-buck competition. (It’s “tossing the wok” in Chinese.)

The Chinese people are getting a rare glimpse of how China’s giant, opaque bureaucratic system works — or, rather, how it fails to work. Too many of its officials have become political apparatchiks, fearful of making decisions that anger their superiors and too removed and haughty when dealing with the public to admit mistakes and learn from them.

“The most important issue this outbreak exposed is the local government’s lack of action and fear of action,” said Xu Kaizhen, a best-selling author who is famous for his novels that explore the intricate workings of China’s bureaucratic politics.

“Under the high-pressure environment of an anticorruption campaign, most people, including senior government officials, only care about self-preservation,” Mr. Xu said. “They don’t want to be the first to speak up. They wait for their superiors to make decisions and are only accountable to their superiors instead of the people.”

The Chinese government appears to be aware of the problem. The Communist Party’s top leadership acknowledged in a meeting on Monday that the epidemic was “a major test of China’s system and capacity for governance.”

Growing numbers of people are questioning the government’s decisions as China enters a period of virtual shutdown. As the virus spread, officials in Wuhan and around the country withheld critical information, played down the threat and rebuked doctors who tried to raise the alarm. A reconstruction of the diseases’s spread by The New York Times showed that by not issuing earlier warnings, the Chinese government potentially lost the window to keep the disease from becoming an epidemic.

The outbreak has undermined the myth that the Chinese political elites win assignments and promotion purely on merit. China has sold this system as its own unique innovation. Developing countries have sent thousands of their government officials to China to learn its model of governance, a political system that offers security and growth in return for submission to authoritarian rule.

People in China are now questioning that premise. They are focusing much of their anger on Xi Jinping, China’s top leader and the person many blame for creating a culture of fear and subservience within the Chinese government.

Few people dare to question Mr. Xi openly, for fear of provoking censors or the police. But after Mr. Xi disappeared from public in recent days, some social media users began asking euphemistically, “Where is that person?” They are also posting online and sharing pictures of former leaders at the site of past crises.

Critics say quietly that, under Mr. Xi, the party began promoting loyal political cadres over technocrats — the experts and skilled administrators who were the backbone of China’s bureaucracy in 1990s and 2000s, when the country grew the fastest.

Those officials could often be corrupt, but even the party’s fiercest critics sometimes acknowledged that they got things done. Liu Zhijun, the former railway minister, is serving a lifetime sentence for taking bribes and abusing power. He also oversaw the creation of China’s high-speed rail system, which vastly improved life in the country.

The wok tossing in China stems in part from the tension between the technocrats, who hold a large number of positions with China’s provincial and national disease control centers, and the political cadres — the mayors, governors and the provincial party secretaries. The outbreak and lack of disclosure suggest that the political cadres are winning. In fact, even the technocrats are becoming cadres because none of them had the courage to tell the public what they knew about the virus.

Chinese officials are spending as much as one-third of their time on political studying sessions, a lot of which are about Mr. Xi’s speeches. Political loyalty weighs much more in performance evaluations than before. Now the rule of thumb in Chinese officialdom seems to be demonstrating loyalty as explicitly as possible, keeping everything else vague and evading responsibility at all costs when things go wrong.

The Chinese people may be paying the price. The failures span the system. 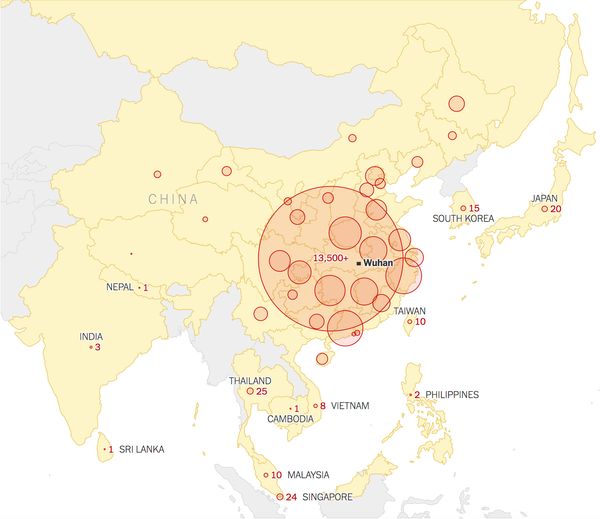 The virus has sickened more than 20,600 people in China and 23 other countries.

Zhou Xianwang, Wuhan’s mayor, said he didn’t disclose the scale and danger of the epidemic earlier because he needed the authorization from higher up. But he could have done something without sharing much information, including telling the residents to wear masks, wash hands frequently and stop big gatherings such as the potluck banquet attended by over 40,000 families just a few days before his city of 11 million was locked down.

When information began to dribble out, it was vague and misleading. In a series of online notices issued between Dec. 31 and Jan. 17, local officials disclosed they were treating pneumonia patients but didn’t say when or how many.

The National Health Commission, the ministry with the authority to declare an epidemic emergency, didn’t issue its own notice about the outbreak until Jan. 19. But the notice essentially kicked blame back to the local authorities. The first sentence cited a rule that required the commission to work with local officials on epidemic prevention.

A top government health adviser, Wang Guangfa, who had reassured the public that the disease was controllable only to be sickened himself, said in an interview after he recovered that he had limited information at the time. He also defended his phrasing as a “misunderstanding” by the general public, saying most outbreaks of infectious diseases are controlled in the end.

Local officials don’t seem to have local people at the top of their list of priorities. In an interview with state television, Ma Guoqiang, the Communist Party secretary of Wuhan, acknowledged that Wuhan residents “are a little anxious and a little nervous” and said he would mobilize all party cells to comfort them.

“But the most important comfort,” he added, “came from Party Secretary Xi Jinping.”

Mr. Xu, the novelist, said Mr. Ma’s remarks demonstrated how officials had more concern for pleasing their bosses than taking care of the people they allegedly served.

“If they can rearrange the order in their hearts,” Mr. Xu said, “we’ll see a very different governance style.”

As they try to contain the spread, local governments are showing that they are better at looking busy than they are at finding a solution. Many are now finding ways to track down and even expel residents from Hubei Province to keep the coronavirus from spreading. Tracking potential spreaders is sound policy, but punishing or persecuting them risks driving them underground, making it even harder to fight the outbreak.

Even outside the hardest hit areas, local officials are showing they don’t make rules with the well-being of the people in mind. A video that went viral across China showed a couple stuck on a bridge connecting Guizhou Province to the city of Chongqing. The two governments had halted travel between them, and the couple — she from Guizhou, he from Chongqing — had no place to go.

On social media, low-level cadres are complaining that they are receiving so many instructions from the higher-ups that they spend most of their time filling out spreadsheets instead of getting real work done. In a social media post headlined “The Formalism Under the Mask,” the author wrote, “Most people in the system don’t do things to solve problems. They do things to solve responsibilities.”

After the epidemic, the Chinese leadership will have to punish a few officials, even severely, to save face and win back some credibility. But for people who are suffering from the epidemic and the failure of governance, the Communist Party may have a hard time winning them back.

“I know before long this country will go back to being a peaceful, prosperous society. We will hear many people screaming how proud they are of its prosperity and power,” a Wuhan resident wrote on the social media site Weibo. “But after what I have witnessed, I refuse to watch the applause and commendation.”

China Makes the Masks the World Needs. It Is Just Starting...

Coronavirus Live Updates: Wuhan to Round Up the Infected for Mass...