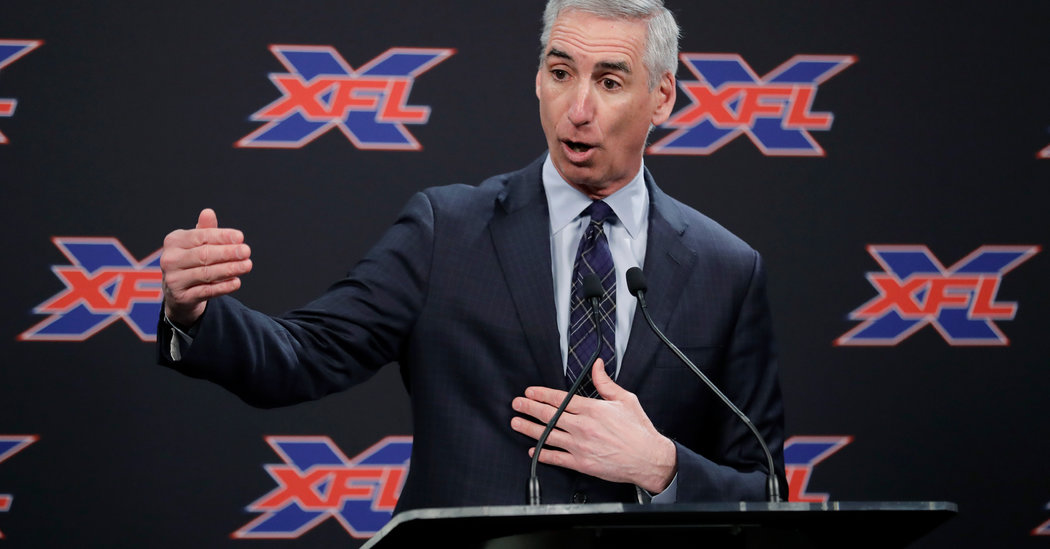 It was a professional football league that lasted for one season 19 years ago, but memories of the XFL are surprisingly vivid for fans over 30: He Hate Me, Jesse Ventura, no fair catches, the Memphis Maniax.

So when the XFL returns this weekend with a new eight-team league, again owned by Vince McMahon of World Wrestling Entertainment, can fans expect more of the same?

The answer, said Commissioner Oliver Luck, is no. “Aside from the name, there is nothing in common that we will have with the league in 2001,” he said.

Rather than razzle-dazzle or ratings-grabbing stunts, “we are focusing 100 percent on the quality of play,” he said.

The old XFL celebrated its edginess, even promising glimpses into the cheerleaders’ locker rooms. “We are gimmick-free,” the new league president, Jeffrey Pollack, said. “And we don’t even have cheerleaders.”

The league has landed every one of its games on television, on ABC, ESPN, Fox and FS1 and 2, as well as on Spanish-language stations. And the newfound mellowness extends to its announcers. While broadcasts in 2001 featured the colorful likes of Ventura, Brian Bosworth and Jerry (the King) Lawler, the lead play-by-play man for XFL 2020 will be a reliable pro, Steve Levy.

Even the most memorable aspect of the old league has been scrapped. Players’ jerseys will have plain old last names, rather than nicknames like He Hate Me (Rod Smart) and Death Blow (Jamal Duff).

The team nicknames have similarly been tempered, with extreme names like, well, the Los Angeles Xtreme and the Maniax (which drew the ire of some mental health advocates) giving way to the more conventional Dallas Renegades and Los Angeles Wildcats.

Pollack acknowledged that despite the XFL abandoning many of its former distinctive features, the old league does buy some good will for the new. “We’re launching a 100-year brand that also has 20 years of equity built in.”

To the extent that the new league is pushing the football envelope, it comes in several unusual rules innovations.

For one, kickoffs will be dramatically different in the new XFL. The kicker will boot the ball from his own 25-yard line, but he will be a lonely figure. His 10 teammates will be lined up 40 yards away at the opposing team’s 35. The returning team will be at its 30. Only once the ball is caught by the returner will players on either side be allowed to move. “It’s effectively a play from scrimmage,” Luck said.

The league has been testing the new kickoff and expects to see more kickoff run backs, exciting plays that have been dying out in football, but without the injuries that are often caused by large men colliding after a 35- to 40-yard sprint.

(This concern for safety is another departure from the original XFL, which billed itself as manly football: It did not allow fair catches, for example. The new league emphasizes that it sought good football players who were also of good character.)

The league has also added a strategic decision that may prove intriguing. After a touchdown, teams cannot kick an extra point. They can go for a single point with a play from scrimmage at the 2-yard line, or go for 2 points from the 5-yard line. They can even go for 3 with a play from the 10. Effectively, the rule makes a 9-point game a one-score game.

Should a game go to overtime, it will end with a contest that operates much like a soccer or hockey shootout. Each team will get five tries to score from the 5-yard line. Whichever team scores more times wins the game. “Let’s have the position players decide overtime,” Luck said.

The league said it wanted to avoid one team getting the ball, scoring and immediately ending the game. But at the same time, it wanted an overtime that would wrap up in seven or eight minutes.

The league, which will play a 10-week season followed by a four-team playoff ending in late April, has opted for big stadiums for its games, including CenturyLink Field, home of the Seattle Seahawks; Raymond James Stadium, home of the Tampa Bay Buccaneers; and MetLife Stadium, where the Giants and Jets play.

Despite the danger of having some empty seats, Pollack said: “We’re playing in eight cities that have a love of football. We want to be in big markets with world-class venues.”

Because of the N.F.L., of course, world-class names are in much shorter supply. Hard-core fans might recognize quarterbacks like Landry Jones (Dallas Renegades), Matt McGloin (New York Guardians) and Cardale Jones (D.C. Defenders). But other unemployed players who might have joined the league, fancifully or not, like Johnny Manziel, Colin Kaepernick, Chad Johnson and Tim Tebow, are absent.

Star power was not a major consideration, the league said. “Our goal was to get the best players who want to play in our league,” Luck said. “We think we’ve got the best 400 or so players that aren’t under contract elsewhere.”

Unlike the N.F.L., the new league will allow its broadcaster to talk about point spreads. “A lot of fans enjoy gaming, playing fantasy, placing legal bets,” Pollack said. “We want to support all of that activity. We see it as a way of increasing fan engagement.”

Though none of the teams have played a game, bookmakers already have opinions. In three of the four opening games, the home team is favored, as might be expected. The exception is the New York team, which is a 2½-point underdog at home to the Tampa Bay Vipers. Perhaps some mojo from the recent-vintage Jets and Giants is rubbing off.

Numerous other professional leagues have been started and have failed in recent years (all were men’s leagues; women do play football, but a high-profile investment in a women’s league is still awaited). Why does the new XFL think it will be different?

Pollack spoke of a “100-year brand,” but will the league even surpass the United Football League (four seasons), the Fall Experimental Football League (two seasons) or the Alliance of American Football (less than a season, just last year)?

Luck said it would, because “the caliber of play is better than any previous league.” Pollack cited two years of research and development, every game being on TV and “ownership that is dedicated to long-term brand building.”

But he admitted the league was taking nothing for granted: “It’s going to take time to build the XFL. Fandom is earned, not given.”

Why now's the best time to trade in your old Samsung...

This 25-minute video is the most riveting sudoku puzzle you will...

Google and Samsung are each readying their own AirDrop-like features

ABOUT US
Newscontest is your news, entertainment, music fashion website. We provide you with the latest breaking news and videos straight from the entertainment industry.
Contact us: [email protected]com
FOLLOW US
© 2019 Newscontest All Rights Reserved
MORE STORIES

The Lakers, the Clippers and a Rare Fight for L.A. Basketball...

Five Years After a Nasty Crash, a Symbolic Layup for Josh...