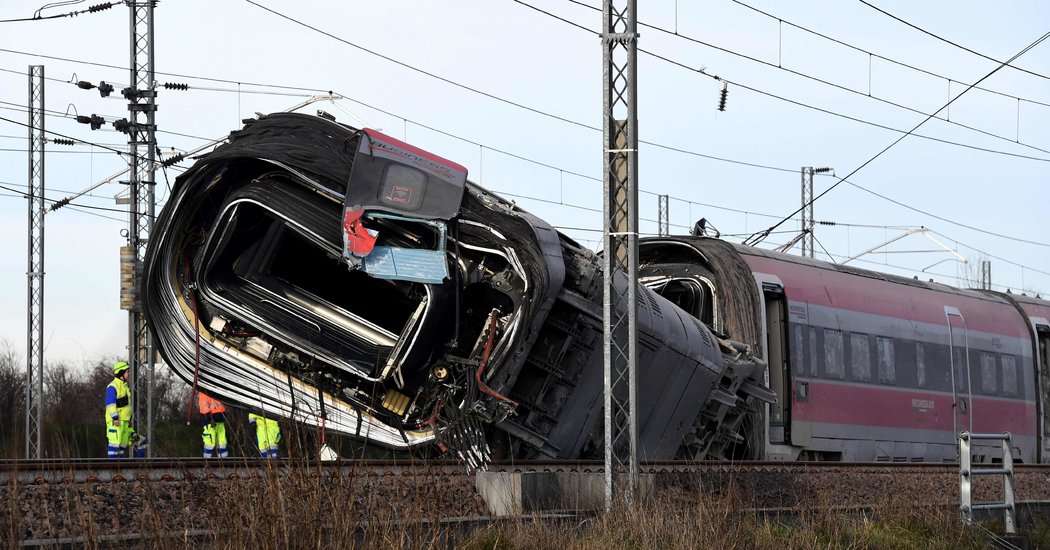 ROME — A high-speed train derailed before dawn on Thursday in northern Italy, killing two railroad employees, injuring at least 31 other people and prompting renewed concerns about the country’s transportation infrastructure.

The passenger train was traveling near its top speed of more than 180 miles per hour when the engine became detached and the second car went off the tracks at about 5:30 a.m. near the town of Lodi, 19 miles south of Milan, Angelo Borrelli, chief of the Civil Protection, Italy’s emergency services agency, told local radio stations.

Local news reports and the authorities said the engine slammed into a railroad building, killing two drivers who were at the front of the train. Another employee, a cleaner, suffered several arm fractures and 27 passengers suffered nonlife-threatening injuries.

The train derailed “by a railroad switch that should have been placed in a certain position but wasn’t,” said Domenico Chiaro, Lodi’s prosecutor, during a news conference later Thursday afternoon.

The authorities had said an investigation was underway.

The train, which is part of a popular high-speed rail service operated by Trenitalia and known as Frecciarossa, or Red Arrow, left Milan early Thursday and was en route to Bologna when it derailed on the heavily used route. Its final destination was Salerno, in the southern region of Campania, where it was to arrive at 11:27 a.m.

Videos shared by fire and rescue services on social media showed a train car flipped on its side while apparently still attached to other cars.

The train was not crowded because of the early hour.

“It could have been a blood bath,” Marcello Cardona, the prefect of police in Lodi Province, told the Italian news agency ANSA. He later said on Rai 3, an Italian television channel, “Luckily, only a few people were traveling on the first two carriages of the train.”

“There shouldn’t be any more deaths,” Mr. Cardona added.

Rail traffic was diverted to local tracks, and there were delays of about an hour.

The railways had undergone maintenance work the night before the crash, a spokesman from Trenitalia said, but it was still unclear if the two events were connected. Mr. Chiaro, Lodi’s prosecutor, said, “We are trying to understand what activities were operated and what kind of connection there is between this activity and the disaster.”

Prime Minister Giuseppe Conte said on Twitter, “It’s a tragedy we need to shed some light on.”

A passenger from Milan, identified only as Chiara, a 30-year-old psychologist, told ANSA as she came departed from the Lodi hospital, where she had been treated for an injury: “We are lucky; it’s a miracle. It was like being on a roller coaster.”

Italy has faced a series of train accidents in recent years, and the country’s crumbling infrastructure came under scrutiny after the Morandi Bridge collapsed in Genoa in August 2018, killing 43 people. In recent months, reports about the eroded state of bridges, roads and tunnels raised concerns that the country’s commuters could be in danger.

In May 2018, two people died and 18 others were injured when a train crashed into a truck in the northern region in Piedmont. In January that year, a packed commuter train also derailed near Milan, killing three people and injuring dozens of others. And in 2016, 23 people died after two trains collided in the southern region of Puglia.

Emma Bubola reported from Rome, and Elian Peltier from London.

Taliban Offer to Reduce Violence in Afghanistan Ahead of Deal With...

Northern Ireland Now Has a Government, but Schools and Hospitals Are...