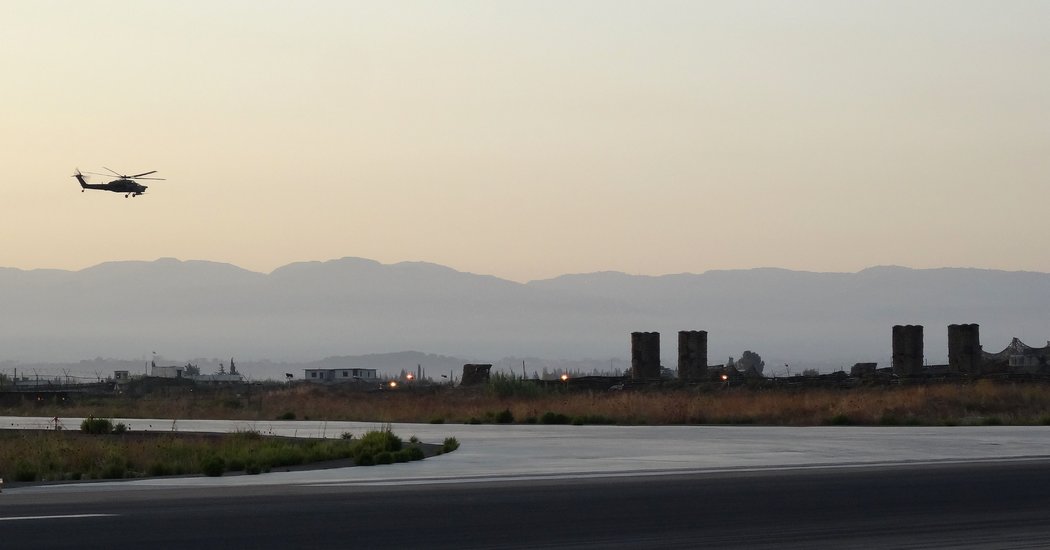 BEIRUT, Lebanon — A passenger plane with 172 people aboard made an emergency landing at a Russian military base in Syria on Thursday after drawing fire from Syrian air defenses in the aftermath of an Israeli airstrike in the area, Russian state news agencies reported on Friday.

A spokesman for the Russian Defense Ministry, Gen. Igor Konashenkov, blamed Israel for the near miss, accusing its military of habitually using civilian aircraft to “cover” its airstrikes and “block” Syrian air defenses from retaliating.

Israel has not acknowledged the airstrike, and its foreign ministry declined to comment on the Russian statement.

The passenger plane, an Airbus A320, was en route to Damascus from Tehran early Thursday when the encounter took place, Gen. Konashenkov said in a statement to Tass and other Russian news outlets. Gen. Konashenkov said the Syrian air defense forces were responding to Israeli fighter jets that had struck the outskirts of Damascus with surface-to-air missiles around the same time, just after 2 a.m.

Israel has repeatedly bombed Syria in recent years in a bid to rout Iranian forces from Syria, where Tehran is entrenched as a military ally and political patron of President Bashar al-Assad.

Both Russia and Iran have backed the Syrian government with financing, militias and airstrikes during the Syrian civil war, now in its ninth year. But neither country has retaliated against Israel.

The plane was caught in antiaircraft missile and artillery fire as it descended toward Damascus International Airport, according to Gen. Konashenkov, but managed to land at Hmeimim Air Base, a Russian-controlled site in northwest Syria.

The Russian report of a near miss seemed to highlight, yet again, the risks to civilian airplanes from the proliferation of powerful antiaircraft missiles in conflicts around the world. It came just a month after Iranian forces unintentionally shot down a Ukraine International Airlines passenger plane soon after it took off from Tehran, killing all 176 people on board.

But Syrian state media did not back up the Russian report on Friday, remaining silent about the prior day’s events.

And a website that tracks airplane transponders showed the plane departed from Najaf, Iraq, not Tehran. Cham Wings Airlines, an airline sanctioned by the United States for ferrying fighters to Syria, operated the flight.

Amos Yadlin, a retired major general in the Israeli Air Force who heads the country’s leading national-security think tank, hit back sharply at the Russian assertion, suggesting on Twitter that the Russians were taking out on Israel their frustrations with the ineptitude of Syria’s air defense forces, which use Russian equipment.

“Probably, the Russians were pre-warned about the strike over the deconfliction channels,” he wrote. But some in Russia who are “frustrated with the Syrian air defense failure to deal with the Israeli air force, accuse Israel who fights Iran’s continuing entrenchment in Syria.”

Recalling Syria’s downing of a Russian plane in September 2018, and Iran’s downing of the Ukrainian passenger liner over Tehran last month, Mr. Yadlin, a former fighter pilot himself, wrote that “advanced and effective” Russian air defense systems were being “recklessly employed by Syrian and Iranian operators” and “endangering civil aviation.”

Israeli Air Force jets, he wrote, “do not ‘hide’ behind civilian aircraft!” To the contrary, he added, Israeli “tries to operate in hours with little civilian traffic.”

Mr. Yadlin said that the plane’s path showed no abrupt sharp turns that would suggest an emergency, but rather a “standard go-around” and “diversion to an alternate airfield” about 200 miles away.

In a Game of Stars, Derek Jeter Distinguished Himself With a...

What to Know to Find the Best Running Shoes: 6 Myths...

Was U.S. Wrong About Attack That Nearly Started a War With...