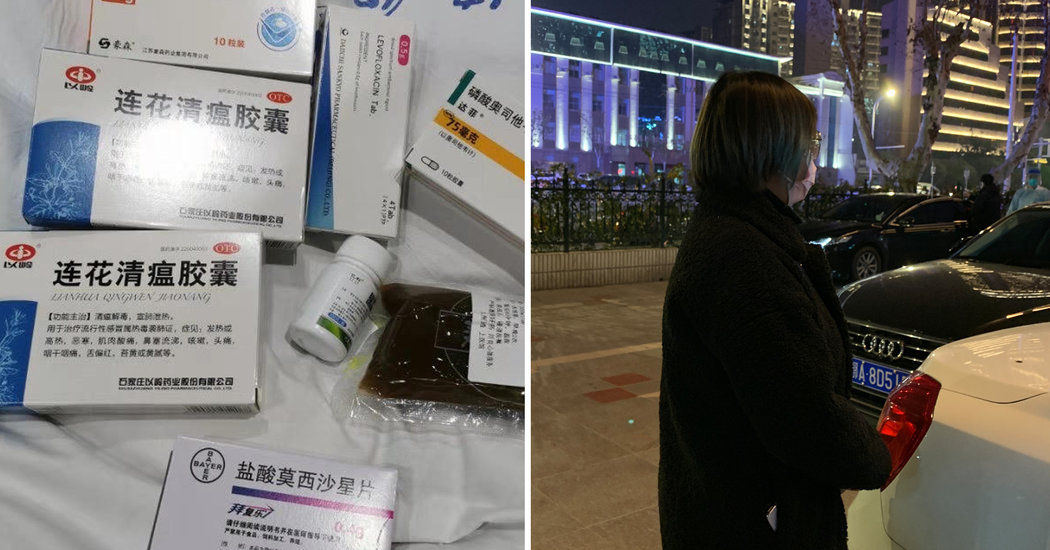 WUHAN, China — Bella Zhang hung an intravenous drip on a spindly tree branch and slumped down on a large stone planter outside the crowded hospital. Her mother and brother sat wearily beside her, their shoulders sagging, both also hooked up to their own drips.

In recent days, Ms. Zhang, 25, had watched helplessly as one by one, her relatives were sickened by the coronavirus that was tearing through her hometown, Wuhan. First, her grandmother got it, then it spread to her grandfather and mother. She and her younger brother were next.

The family had pleaded for help, but the city’s hospitals, faced with an extreme shortage of beds, could not take them. On Feb. 1, Grandfather Zhang died at home.

“They tell us to wait,” thundered Ms. Zhang’s mother, Yang Ling, 48, speaking to a reporter from The New York Times who visited the hospital.

She nearly ripped the intravenous needle out of her hand as she waved her arms in frustration. “But wait until when? We’ve already lost one.”

The city of Wuhan, where the new coronavirus originated, is struggling to get the epidemic under control, exacerbated by a lockdown as well as the government’s limited resources and options. Overwhelmed and understaffed, hospitals have turned away many sick residents like the Zhangs, forcing them to go home and quarantine themselves in small apartments where they risk infecting other family members.

Nearly 15,000 people have been sickened in the city, and more than 600 have been killed, accounting for three-quarters of the total deaths in China from the virus. Faced with growing public anger and desperate to stop the spread, the authorities in recent days have been rounding up patients with mild symptoms and putting them into makeshift quarantine centers, which create their own separate challenges for treatment.

Such centers have been set up in sports stadiums and exhibition venues to house several thousand patients in total, with beds arranged close together and in tight rows. The strategy has raised concerns about whether such dormitory-like facilities could inadvertently help spread other infectious diseases among the patients.

Ms. Zhang, who was admitted to one of the centers on Thursday with her mother, a retiree, saw it as their only option to keep from infecting her father.

It was cold in the tall, repurposed exhibition center; bathrooms were limited; and there was little privacy. But the beds were heated with electric mattress pads, and medical teams checked their temperatures three times a day and gave out free medicines and meals.

“At least someone cares now,” she said in a telephone call from the quarantine center.

For Ms. Zhang’s family, the first signs of trouble emerged in the week leading up to the Lunar New Year, when her 70-year-old grandmother, who was in good health, had a fever and started coughing.

By then, the new virus had been percolating in the city for weeks, but officials had mostly played it down. That week, the government finally disclosed that it was spreading among people. Ms. Zhang’s relatives didn’t think they were at risk because they had spent most of their time indoors. They took her grandmother to a clinic, where the doctor prescribed medicine for a cold and sent her home.

To contain the outbreak, the government locked down the city, shut down public transportation and banned most private cars on the roads. Like many of her fellow residents, Ms. Zhang, a perfume saleswoman with tinted blue hair and a love of travel, was at first unworried. She posted memes on social media making light of the lockdown and passed the time by sorting trail mix.

Her grandmother, who was staying with them for the holidays, continued to cough. Her fever would not recede.

Then Ms. Zhang’s grandfather, already weak from lung cancer, suddenly took a turn for the worse. He had been using an oxygen machine to support his breathing for 30 minutes in the morning and again at night. Now he couldn’t breathe at all, and needed to be hooked up to the machine around the clock. He came down with a high fever. For four days he was so uncomfortable that he couldn’t sleep, Ms. Zhang said.

Desperate to find help, Ms. Zhang and her family called everyone they could think of. But the hospitals were all full. Emergency responders told them they needed to secure a hospital bed first before an ambulance could be sent.

Ms. Zhang was devastated to see her grandfather, who had helped raise her, nearing death. Overnight, her social media feed, normally full of food and travel photos, became a flood of urgent cries for help. In a last-ditch effort, she called a hotline for the city’s mayor. But an operator had no answers, and asked her what they planned to do.

“You’re asking me, an ordinary citizen, how to resolve this?” responded Ms. Zhang, incredulous. She hung up.

That afternoon, her grandfather died in the family’s apartment.

Workers from a funeral home arrived to take his body away. They said that because he had possibly been infected with the virus, the family was not allowed to accompany the body and it had to be cremated immediately.

But they had no time to mourn. Ms. Zhang’s grandmother was now deteriorating rapidly. They took her to a hospital, where a doctor said that her lungs appeared on a CT scan as almost entirely white — signs of severe pneumonia. She later tested positive for the coronavirus.

Ms. Zhang’s grandmother needed to be admitted to one of the hospitals in the city designated to handle coronavirus patients. There, doctors may be able to monitor their vital signs, treat them with antiviral and anti-H.I.V. drugs and provide them with oxygen support.

But there were still no beds.

By then, doctors had told Ms. Zhang and her mother they were infected. Her younger brother, Allen, also tested positive. They were all told to return home.

Her father, 50, was the only member of the family who had not been infected. He took to sleeping in the living room, away from the rest of them. They wore masks all the time, even as they slept, and took turns caring for Ms. Zhang’s grandmother, who by now was struggling to breathe and could barely get out of bed.

But Ms. Zhang was convinced it was only a matter of time before her father was infected, as well. They did not have any disinfectants or N95 respirators, heavy-duty masks that better protect against the virus.

“Every day you’re living together, drinking and eating together, sitting together and watching the news,” Ms. Zhang said. “No matter how hard you try, of course he’s going to get it.”

For Ms. Zhang, her mother and her brother, their days quickly became a frantic routine.

They would take the grandmother to the hospital to see a doctor around midnight, when the lines were shorter, to get medication. During the day, they returned to the hospital with their mother and waited in line. Ms. Zhang’s mother could barely contain her frustration.

“What kind of government is this?” Ms. Yang said in a rapid-fire local dialect, her voice carrying across the hospital courtyard. “The news is always talking about how good everything is; they don’t even care about the ordinary people.”

It wasn’t just the government’s slow response to the expanding epidemic that infuriated Ms. Yang. It was what felt like the denial of basic dignity. After Grandfather Zhang died, she said, he was taken away “like a dead pig or a dead dog.” They still didn’t know where his ashes were and had no time to think about funeral arrangements.

“I can’t even save the people who are alive,” Ms. Yang said.

“Now, all we can do is beg the heavens,” she said. “Begging anyone else is of no use.”

US colleges are trying to install location tracking apps on students’...

The Best Combini Sweets to Try in Japan

For China’s Overwhelmed Doctors, an Understanding Voice Across the Ocean