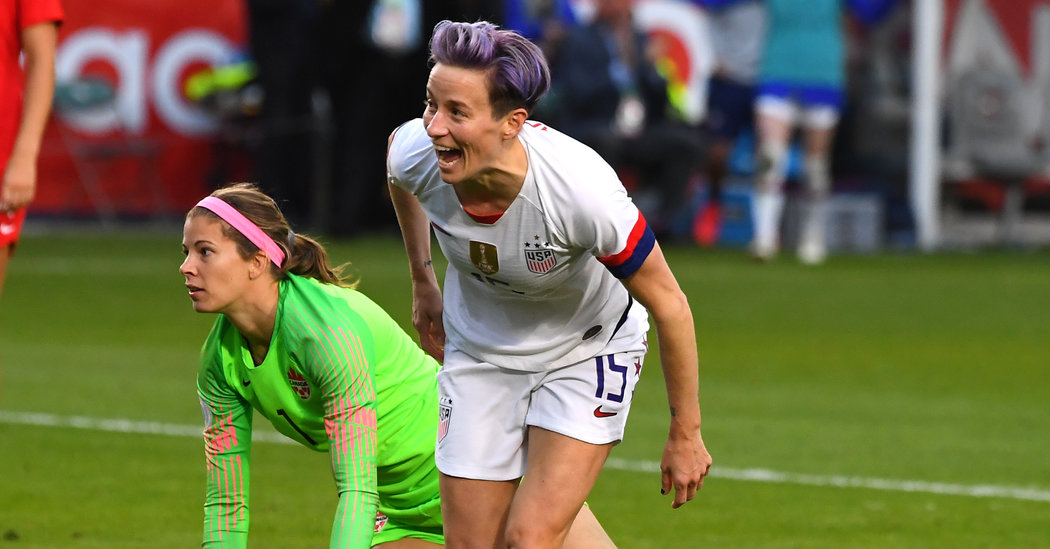 CARSON, Calif. — A great example of the relentless competition for roster spots on the United States women’s soccer team might have been a short video clip that popped up on social media on Wednesday.

In it, several United States players can be seen filing off a bus before a training session last week. Forward Tobin Heath with a coffee and a stony look. Goalkeeper Adrianna Franch, her headphones firmly in place. And then a surprise: striker Alex Morgan, seven months pregnant, flashing a mischievous smile.

Thrilled to be here surrounded by ALL our favorite people. 😏 pic.twitter.com/0qMymWeFOE

Morgan, of course, is absent these days from the team she helped lead to the World Cup title last year. Her first child is due in April, only three months before the Americans will open play in the Tokyo Olympics, and her visit to a training session was merely a chance to see her teammates while they were in town to punch their ticket to the Games.

But there also was a subtle message sent in Morgan’s appearance, in her decision to go through warm-ups, and in the workout videos she has been regularly posting on her social media accounts: Don’t forget about me.

She knows as well as anyone that after Sunday’s 3-0 victory against Canada in the CONCACAF Olympic qualifying tournament final, the United States players will begin a much tougher competition: the battle for places on the team for this summer’s Tokyo Games. And no one, not even Morgan, wants to be left behind.

Simple math makes the battle for places a high-stakes affair: Since Olympic rosters are capped at 18 players, at least five members on the 23-player roster that won the World Cup — talented, popular, worldbeating players — will need to be cut from the team before it leaves for Japan.

Regulars like Allie Long, Morgan Brian and Mallory Pugh, who were left off the squad for the Olympic qualifiers, have already felt the squeeze. And the emergence of new options like forward Lynn Williams will only complicate the decisions, which can have profound professional and financial consequences for the players involved.

“Yeah, it’s tough,” forward Carli Lloyd, who wears her ruthless competitive streak as a badge of honor, said of seeing teammates dropped, even temporarily. But she also said it would only get harder. “It’s going to be cutthroat.”

On Friday, with qualification for Tokyo on the line in a winner-take-all semifinal, Coach Vlatko Andonovski showed little interest in experimenting; instead, he started 10 of the 11 players who started the World Cup final last July (subbing only Lloyd for the absent Morgan). On Sunday, with the spot secure, he rested parts of his favored lineup and sent out Williams, Christen Press and Lindsey Horan, and the second-string defenders Ali Krieger and Emily Sonnett.

Williams and Horan rewarded his faith — and bolstered their cases for bigger roles — with second-half goals. Megan Rapinoe delivered the third goal off the bench, to the delight of a crowd that roared even louder when she struck her now famous arms-out celebration pose.

Now, with yet another win over Canada in the books, the daily competition for places, and for playing time, will only intensify. Mexico’s coach, Chris Cuéllar, joked Friday that the United States was far ahead of its rivals because “every practice is probably tougher than a lot of their matches.”

“Every game, every play, every practice — it’s very intense,” midfielder Julie Ertz said of the expectations for players new and old. “We take it very seriously, and we have a standard we hold each other to.”

Aly Wagner, the television broadcaster who made her national team debut in 1999 and later played in two World Cups and two Olympics, lived those daily battles for more than a decade. “It is cutthroat,” she said. “It’s competitive and feisty and intense every day.”

“It’s emotionally a lot, for each of these players,” she added. “If you’re playing and starting, it’s perfect. If you’re scratching and clawing to get into this roster, or get into the lineup, it’s a grind.”

Wagner and current players described the atmosphere of constant competition as a battle not of player against player, but of player against “their best self.” But yes, Wagner said, there were also hard fouls and kicks in training, and sideways glances in the locker room. Every player does it at some point, she said, and then sets it aside.

“That’s how you navigate this environment,” Wagner said. “If you start to think about you vs. someone else, that is septic. It’s not good for you as a player, and it’s not good for the group.”

Instead, players try to sharpen their focus on things they can control. Midfielder Sam Mewis said Andonovski had worked with her on improving even a single kind of pass each time. Williams has been instructed to “do right now what nobody else can do, and use your speed and be dynamic.”

“So that’s what I’m doing,” she said. “Hopefully he likes it. Hopefully it continues.”

In the end, Williams said, whether she gets a bigger role for the coming SheBelieves Cup in March, or a set of April friendlies, or even the Olympics, “is not my decision.”

So she will keep trying to get behind defenders. And Press, who hit the crossbar with a rocket on Sunday, will keep trying to score every time she’s on the field. And Sonnett — who played multiple positions in recent games — will continue to show value in her versatility.

“One step is just getting in the door,” Williams said. “And then the next step is hopefully getting on the field.”

What It’s Like to Be a Virtual N.B.A. Fan

Netflix vs Amazon Prime Video: Which streaming service is best for...

Kenny Atkinson Is Out as Nets Head Coach

I.O.C.’s Reassurance About the Tokyo Olympics Rankles Some Athletes

An AirDrop-style file sharing feature is coming to Android 11

Facebook's Photo and Video Transfer Tool is Now Available in All...

Coping With Kobe Grief: ‘There’s No Giving Advice on This’