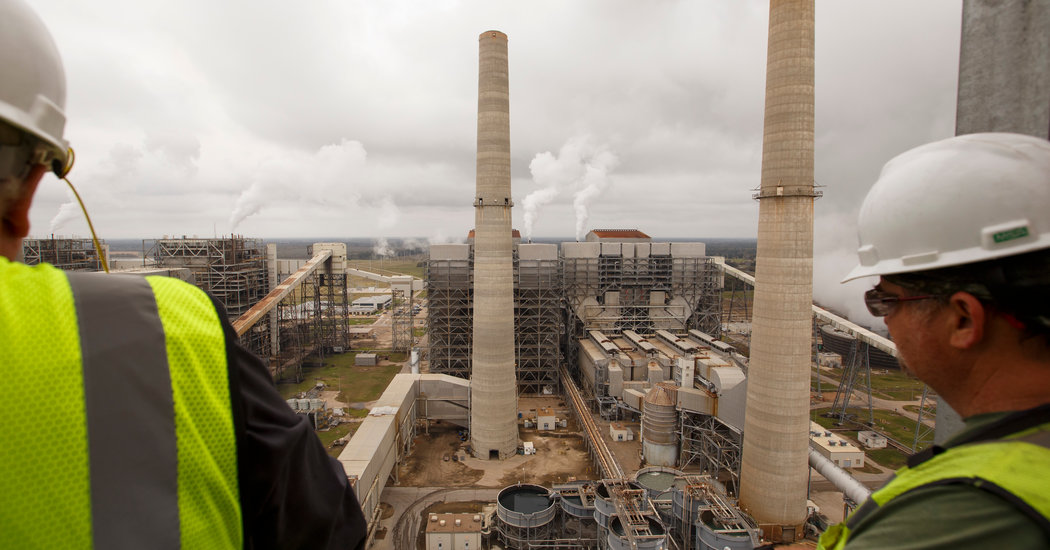 WASHINGTON — A rare policy enacted under President Trump to address climate change has run into an unexpected hurdle: the tax man.

In 2018, Congress approved a lucrative tax break for companies that use carbon capture technology to trap carbon dioxide produced by industrial sites before the gas escapes into the atmosphere and heats the planet. The technology is still costly and contentious, but may one day become a valuable tool for slowing global warming. House Republicans are aiming to expand support for carbon capture as part of a broader package of climate bills, the first of which is expected Wednesday.

At least a dozen carbon capture projects, potentially representing billions of dollars in investments, have been announced since Congress passed its 2018 tax break. But two years later, those plans remain blocked because the Internal Revenue Service has yet to explain how, exactly, companies can claim the tax credit that would make the projects viable.

“The delay is unacceptable and will only further slow much-needed investment in carbon capture,” said Senator John Barrasso, Republican of Wyoming and an original co-sponsor of the tax break.

Asked about the delay, an I.R.S. spokesman said Thursday that the agency would begin issuing some guidance “within the next few weeks,” including clarity on how project developers can partner with investors. But other important guidance is still “under development,” the I.R.S. spokesman said.

That includes rules for monitoring underground storage sites and imposing penalties if the carbon dioxide leaks back out. As to why the rules have taken two years, he said the agency has been working through “many challenging issues” raised by companies, environmental groups and other interested parties.

Observers say the I.R.S. has also been busy implementing the vast 2017 Republican tax overhaul, which may partly explain the delay.

But the clock is ticking on its tax credit. By law, companies have to start construction by the end of 2023 to qualify for the credit, but planning and financing large projects can take years. The uncertainty created by the delay, many fear, may prevent projects from getting off the ground.

In North Dakota, Minnkota Power Cooperative, an electric utility, is studying a $1 billion plan to bury heat-trapping gases from one of its coal-fired power plants. In Indiana, the Wabash Valley Resources company aims to produce greener ammonia fertilizer by stashing its emissions underground.

In Texas, Occidental Petroleum is looking to capture carbon dioxide from two ethanol plants and inject the gas into its underground wells to help extract oil. This practice, known as enhanced oil recovery, would produce more fossil fuels. But the company says that emissions from that oil would be at least partly offset by the injected carbon dioxide that remained underground — creating a fuel that has a smaller climate impact than conventional oil.

The I.R.S. delay is striking because the tax credit was one of the few climate policies to attract bipartisan support.

Democratic backers said that carbon capture could prove necessary to cut climate change pollution from industrial sources like cement or steel plants that are otherwise hard to clean up. Republican supporters, along with coal and oil companies, saw carbon capture as a less disruptive way to reduce emissions than abandoning fossil fuels altogether.

And while many environmentalists recoiled from a policy that would aid oil extraction, some green groups said that oil industry support could help drive down the cost of carbon capture faster.

The tax credit is worth up to $50 for each ton of carbon dioxide captured and permanently buried underground, and up to $35 per ton if the captured gas is used for activities like enhanced oil recovery. To qualify, a power plant must capture at least 500,000 tons of carbon dioxide per year, which means the credit could be worth more than $200 million over its 12-year lifetime.

That’s a bigger tax break than most developers can use on their own. Instead, many will need to partner with banks or investors with large tax burdens — much as wind and solar developers have done with their own federal tax credits.

That’s where the I.R.S. delay matters, given that the agency hasn’t explained how these financial partnerships can be structured, what steps companies must take to ensure that the underground carbon dioxide doesn’t leak out, and what the penalties might be if leaks do occur.

The I.R.S., already strained by years of budget cuts, faces technical challenges in writing carbon capture rules. Environmental groups, for instance, have urged the I.R.S. to use the Environmental Protection Agency’s existing monitoring rules for underground storage. But some industry groups have backed an alternative standard, which critics fear could be less stringent.

Carbon capture technology has long struggled to gain traction. A few early government-backed projects were never finished after billions of dollars of investments and delays.

Yet there are still hopes that carbon capture could help the world avoid the worst consequences of climate change. The International Energy Agency has suggested that countries may need to capture more than 2 billion tons of carbon dioxide per year by 2040 to help keep global warming below 2 degrees Celsius, the international goal.

Industry officials say they are now starting to get the hang of the technology.

In 2017, with help from an Energy Department grant, NRG and JX Nippon Oil and Gas Exploration successfully retrofitted a coal plant near Houston with a carbon capture device. The plant’s exhaust is run through chemicals that bind to the carbon dioxide, which is then piped to nearby oil wells. (In theory, the carbon dioxide stays underground, and newly freed oil comes up.)

So far, the facility has captured an average of 1.3 million tons of carbon dioxide per year, roughly equal to the annual pollution produced by 276,000 cars.

In North Dakota, Minnkota Power now plans to retrofit one of its coal units with a similar technology, aiming to capture 3 million tons of carbon dioxide per year and store it more than a mile underground. Minnkota’s chief executive, Robert McLennan, said the utility is thinking about a future in which stricter climate rules could otherwise force its coal plant to shut down.

But success is far from assured. The $1 billion project isn’t viable without the federal tax credit, Mr. McLennan said, and lining up partners will take time. “Starting construction by the end of 2023 is going to be a challenge,” he said. “The sooner the I.R.S. can provide clarity, the better.”

Similarly, in New Mexico, the utilities that own the San Juan Generating Station, an 847-megawatt coal plant, were planning to retire the facility by 2022 as the state imposes stricter emissions rules. But the city of Farmington, N.M., is now proposing to partner with a company called Enchant Energy to take over the plant and outfit it with carbon capture technology to keep it running until 2035.

Peter Mandelstam, the chief operating officer of Enchant, said carbon capture could reduce the plant’s emissions by 90 percent, allowing it to comply with the state’s new rules. “This is a less disruptive way to transition to a renewable future,” he said, noting that hundreds of jobs could be lost if the plant closed today.

Another company with a keen interest in carbon capture is Occidental, the largest producer of oil in the Permian Basin of Texas and New Mexico. In addition to its plans to capture emissions from two ethanol facilities, the company has partnered with a Canadian firm, Carbon Engineering, to explore a device that would pull 1 million tons of carbon dioxide per year directly from the air for use in enhanced oil recovery.

Occidental says its ultimate goal is to become carbon neutral — by removing as much carbon dioxide from the air as its oil produces — though it has not set a firm date on that. “We view carbon capture as a way to differentiate ourselves,” said Richard Jackson, president of Occidental’s low carbon ventures division.

But some environmentalists fear that the end result will simply be more oil. John Noël, a senior climate campaigner at Greenpeace, said increased use of carbon dioxide to extract petroleum could potentially mean “untold amounts of oil flooding the market, maintaining demand.” The risk, he said, is, “we never reach this point of transition” to a lower-carbon future.

A less contentious proposal is in Indiana, where Wabash Valley Resources is converting an old power plant into a factory that makes ammonia fertilizer from petcoke, a byproduct of oil refineries. The company plans to inject its emissions, at least 1.5 million tons of carbon dioxide per year, 7,000 feet underground into porous sandstone. The company needs the tax credit for the project to make economic sense.

Today, ammonia production accounts for roughly 1 percent of global emissions. But ammonia made using the greener manufacturing process could be sold to corn farmers producing ethanol to make lower-carbon fuels for California’s market, according to Nalin Gupta, managing partner at Wabash Valley Resources. Or the ammonia might one day be used to power ships, which currently run on highly polluting bunker fuel.

When Coronavirus Closes Your Lab, Can Science Go On?

China Pushes for Quiet Burials Amid Questioning Over Death Toll

Matvey Natanzon, a.k.a. Falafel the Backgammon King, Dies at 51

England Drops Its Quarantine for Most Visitors, but Not Those From the U.S.