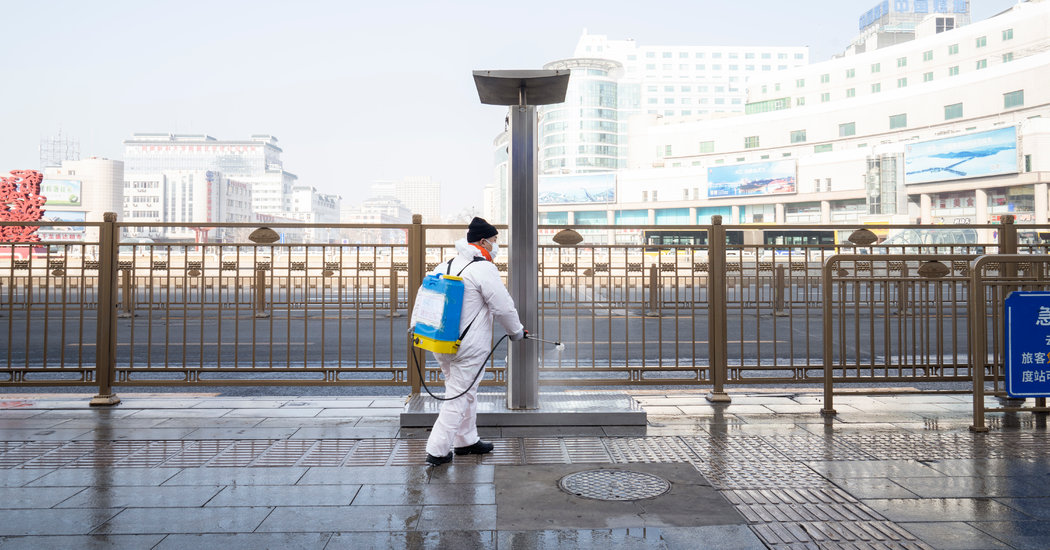 FRANKFURT — So far, only scattered cases of the coronavirus have appeared in Europe, but the economic effects are proving harder to quarantine. The shock may be severe enough to push the vulnerable German economy, and perhaps the entire eurozone, into a recession.

That is the conclusion of a growing number of economists as it becomes clear that it will take weeks, at best, before the Chinese economy resumes its role as a prolific exporter of essential factory goods, and as an increasingly important consumer market for the rest of the world.

“The longer it takes for production to resume, the higher the risks,” said Jörg Krämer, chief economist at Commerzbank in Frankfurt.

For the chief executive of Daimler, one of Germany’s most prominent companies with several auto plants in China, the crisis is one of uncertainty.

“I’m calling China every day,” Ola Källenius said at a news conference in Stuttgart on Tuesday. “It’s too early to say if and how other factories could be affected. We are talking about global networks.”

The rest of the world could also suffer economically, the Federal Reserve chair, Jerome H. Powell, warned lawmakers on Tuesday.

“We are closely monitoring the emergence of the coronavirus, which could lead to disruptions in China that spill over to the rest of the global economy,” Mr. Powell told House Financial Services Committee members.

A dismal profit report by Daimler on Tuesday underlined why it would not take much to shove the eurozone, the 19 European countries that use the euro, into a downturn. That would exacerbate a slump in global trade that was manifesting long before the coronavirus claimed its first victims.

Daimler said that it slipped into the red at the end of 2019, battered by the cost of adjusting to new technology and by penalties from diesel emissions cheating.

Vehicles are Germany’s biggest export, as well as an important part of the national identity. Many economists predict that official data to be published Friday will show that the German economy shrank in the fourth quarter of 2019 because of a slump in manufacturing.

The problems of German automakers’ reverberate around the Continent, because so many small and midsize parts suppliers in countries depend on them for sales. Italy’s economy shrank in the fourth quarter in part because its industrial north is closely linked to Germany.

“For most countries, Germany is the most important trading partner,” said Carsten Brzeski, chief economist at ING Germany. “If it starts to slow down, other countries will feel it.”

Daimler reported a quarterly loss of 11 million euros, or $12 million, compared with a profit of €1.6 billion in the fourth quarter of 2018. The evaporating earnings put Daimler, the maker of Mercedes-Benz cars and trucks, in a weak position as it confronts the economic consequences of the coronavirus outbreak.

Daimler and other carmakers were forced to keep their factories in China closed longer than planned after the Lunar New Year holiday, and the virus has kept people out of showrooms. On Monday, the company said it had begun gradually ramping up production at its Chinese factories.

But the situation remains tense and unpredictable. There is widespread concern that assembly lines around the world could be forced to shut down for lack of components made in China.

China has become a critical market for all German carmakers. Daimler sold nearly 700,000 Mercedes-Benz cars in China last year, more than twice as many as it sold in the United States.

“The coronavirus provides a substantial risk for the expected global recovery, as hopes were pinned on an improvement of the Chinese economy,” Stefan Schneider, an economist at Deutsche Bank, said in a note to clients on Tuesday. A recession in Germany early this year is “quite probable,” Mr. Schneider added.

Smaller companies are also affected. Many have factories in China that have been idle or operating far below capacity.

Ziehl-Abegg, a German maker of industrial fans, has a factory in Shanghai with 450 workers who produce air-circulation systems for hospitals, among other things. The high-performance fans have been in high demand during the crisis.

Even after the Shanghai factory was allowed to reopen this week, fewer than half of the employees reported to work. They were under orders to stay home because they had visited affected areas of China during the Lunar New Year.

German machinery makers like Ziehl-Abegg are coming off a terrible year and can hardly afford any more problems. New orders for products like machine tools or construction machinery slumped 9 percent in 2019 because of President Trump’s trade war, Brexit and auto industry woes.

“The political turmoil created uncertainty, and uncertainty is poison for investment,” said Olaf Wortmann, economist for the Mechanical Engineering Industry Association in Frankfurt.

The coronavirus outbreak is another blow. Some of the lost sales may be recouped once the virus fades, Mr. Wortmann said. But, he added, “the longer this virus spreads its misery, the harder it will be to catch up later.”

The German car industry is in a damaged state in part because of its own misconduct. Like its rival Volkswagen, Daimler faces substantial costs from accusations that it programmed diesel vehicles to cheat on emissions tests. Daimler said on Tuesday that it had set aside €1.5 billion during the quarter, and a total of €4 billion for the year, to cover the cost of legal proceedings and penalties in Europe, the United States and other places.

The company has disclosed that it is under investigation in the United States by the Department of Justice, the Environmental Protection Agency and California regulators, as well as by the authorities in Europe and other jurisdictions.

The accusations have put Daimler on the defensive just as the auto industry is in the midst of its biggest shift in technology in a century. Like other carmakers, Daimler must invest billions in electric cars and autonomous driving, or risk becoming irrelevant.

“The whole industry is in transformation,” said Mr. Källenius, the Daimler chief executive. “In 10 years, we won’t be the same company.”

At U.C. Irvine, to Honor Kobe Bryant Is to Win

‘My Last Stand’: In South Korea, a Protester’s Lone Fight Against...

Facebook Provides an Update on Its Plans to Connect the World...

Traffic jams in Google Maps could be spoofed with 99 phones...

‘I Don’t Regret What I Did,’ Cummings Says of Trip During...