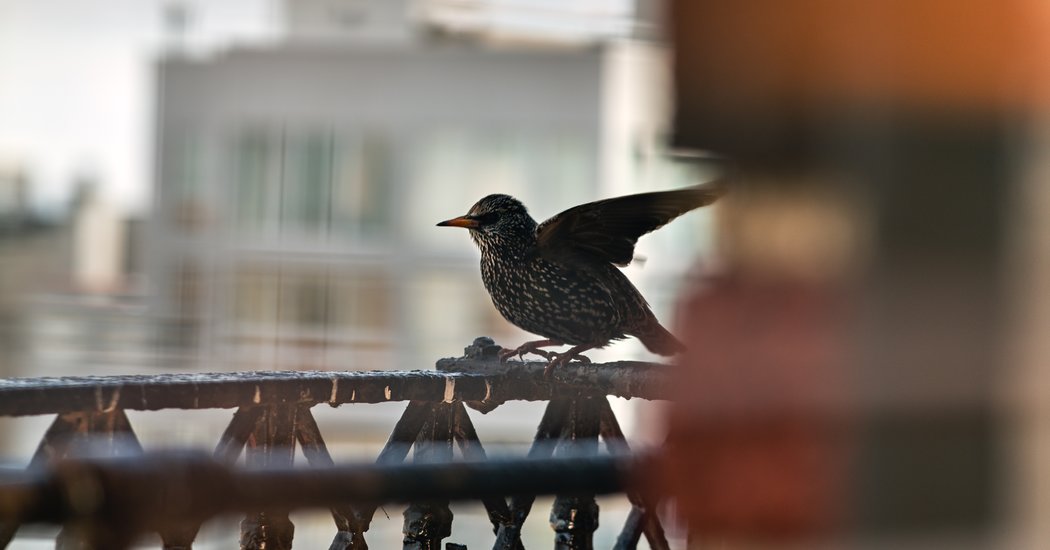 Each day along the upper railings of my top-floor Brooklyn apartment’s fire escape, starlings alight and start holding forth in an ever-­evolving chorus of clown whistles, clicks and shards of expert mimicry. I’ve heard everything from them over the years: other bird calls, human voices, car horns, jackhammers, backup beeps, snippets of ice-cream-truck jingle. Even brief, flyaway strains of Sinatra and the Beatles, no doubt snatched from the pair of tattered speakers that the owner of Love Liquors sets out in front of his store each day alongside a huge plastic effigy of the rum pirate, Captain Morgan.

The birds’ phrasings are both melodic and mechanical, cyclical and spontaneous, like the wordless vocables of scat singers. With the wide sky setting off their plump, white-­flecked black plumages, they often remind me of my Sicilian aunts in their polka-­dot dresses, chatting away in front of the narrow brick rowhouse I grew up in on East 37th Street out in Flatlands, Brooklyn. Certain birds are renowned for their ability to craft elaborate nests and roosts; some I’ve seen in Africa are veritable apartment buildings like mine, with private entrances to an array of separate flask-­shaped chambers. Starlings, for their part, weave habitable nests of song, ones in which I’ve long been taking up residence.

In America, the starling’s presence can actually be traced back to a single passing reference to the bird in “Henry IV.” The story is by now well known (and oft-­lamented): how on March 6, 1890, one Eugene Schieffelin, chairman of the American Acclimatization Society, decided that in keeping with the society’s commitment to introduce into America all the birds mentioned in Shakespeare, he would release a pod of 80 European starlings in Central Park. Despite that day’s driving sleet (and the fact that none of the society’s previous Shakespearean inductees, like the skylark and the nightingale, had survived), this inaugural flock managed to ride out the rest of that winter of 1890, some under the eaves of the nearby American Museum of Natural History. Today the North American starling population is well over 200 million and counting.

It was an evolutionary duet between two seemingly disparate body parts that ensured the starling’s extraordinary success. Specialized muscles in their beaks allow them to open even when stuck firmly into the hardened winter earth in search of food. Their eyes, meanwhile, have come to be situated in the narrow front of their face, affording them a more intensely focused, binocular vision — prying beaks and eyes coalescing to form the perfect foraging and nesting machine.

Such prowess, of course, makes starlings a bittersweet inheritance, the bird that even Audubon’s website recently informed readers that it’s O.K. to hate. Starlings have been known to drive other native bird species from nests and backyard feeders; they pilfer grains from farmers’ fields and storage sheds and corrode surfaces with their droppings. On the plus side, they are one of the world’s most proficient exterminators, yearly consuming millions of pestilent insects, grubs and worms. Their dazzling murmurations — exquisitely synchronized midair swirls of their gigantic flocks — can black out skies. The males have been known to decorate their nests with flowers to attract mates and fumigate their dwellings with fresh herbs to repel unwanted pests.

Still, perched up here as I’ve been in my sixth-floor aerie over the years, I find that the starling’s great intelligence and vocal skills have most beguiled me, as they have so many over the ages. Pliny the Elder once claimed that starlings can be taught to speak lines of Latin and Greek. In late May 1784, in a Viennese shop, Mozart heard a starling singing a motif strikingly similar to the allegro movement of his Piano Concerto No. 17 in G Major. He ended up buying the bird and grew so attached that when it died three years later, he held an elaborate funeral procession and composed a poem for the beloved bird, burying it in his yard. As one translation reads: “A little fool lies here/Whom I hold dear/A starling in the prime/of his brief time.”

It’s not merely the starling’s powers of mimicry but the apparent inventiveness that so enthralls. Most birds have a signature call that they repeat over and over again. Starlings also make things up as they go along, trying out different riffs, injecting new clauses midsentence, suggesting that a property of human language known as recursion may — like so many other widely shared phenomena: tool use, culture, self-­recognition, empathy, grieving — not be exclusive to us. Indeed, it came as no surprise to me to read back in 2006 that a scientific study was done of starlings, analyzing their vocal capabilities to better understand the origins of human language.

Lucky for me, I have long had a working lab right here outside my living-­room window. Nothing lifts my spirits more than to see starlings alight there throughout the day, roll their heads to let the breeze comb their neck feathers and then let loose over Brooklyn’s tumbledown rooftops with madcap soliloquies, outpourings of which the Bard would have been proud. Lovely how such slight and flitting beings can knock us humans off our pedestal of self-­importance and exceptionalism. How each time they alight, they seem to make a whole city recede, rendering it a mere perch for their passing purposes — and these words little more than a poor translation.

Lawrence Tesler, Who Made Personal Computing Easier, Dies at 74

To Eat or Not to Eat? An Overview of Intermittent Fasting

Airbus to pay €3.6bn settlement to France, US, UK over 'bribery and corruption' investigation

In Europe, Fear Spreads Faster Than the Coronavirus Itself