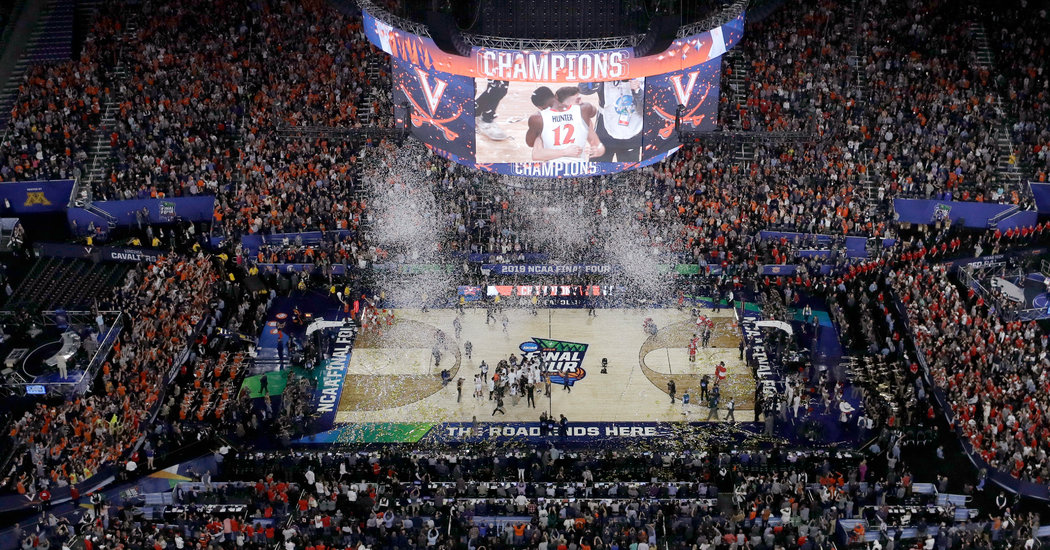 WASHINGTON — The National Collegiate Athletic Association and its sprawling membership of schools are mired in fights — behind closed doors, in statehouses and on Capitol Hill — over whether and how student-athletes should be allowed to profit off their renown.

Here are answers to some questions surrounding the debate, which is virtually certain to last for many more months.

What are the rules right now?

The N.C.A.A.’s Division I manual is a thick anthology of guidelines, but Article 12, which covers amateurism and athletic eligibility, is under the greatest scrutiny by elected officials across the country.

Part of that article bars a student-athlete from accepting compensation in exchange for allowing “his or her name or picture to advertise, recommend or promote directly the sale or use of a commercial product or service of any kind.”

The bylaws forbid sponsorships, but also activities like taking cash for autographs or monetizing social media channels. The N.C.A.A. also has a rule — with some exceptions — that players cannot participate in a college sport if they have agreed to be represented by an agent.

Didn’t California do something about this?

Yes, but with a long windup.

Back in September, California approved legislation that challenged the N.C.A.A.’s bans on agents and endorsement deals. It was, however, something of a time-delayed assault: The measure is not scheduled to take effect until 2023.

Still, it has already encouraged lawmakers in dozens of other states to consider bills of their own, and many have drawn bipartisan backing. Some of those proposals would take hold far faster than the California law. In Florida, for instance, one proposal was written to go into effect this summer if it passes.

No state has passed a measure like California’s just yet, and politicians across the country are approaching the subject with varying levels of intensity. But the N.C.A.A., which opposed the California legislation, has worried publicly about the prospect of a “patchwork” of laws that it fears could undermine rules that apply to colleges nationwide, with conferences and national championship contenders coming from many different states.

In response to the mounting pressure from California and other states, the N.C.A.A. has conceded that it must modernize its bylaws, but its working groups and committees have not released any proposals for changes. And the N.C.A.A., which has repeatedly signaled that any revisions would only go so far, is unlikely to give final approval to any rewrites of its rules before January 2021, when it will next hold an annual convention.

“The member schools are working really hard to try to figure out where they want to be on this particular topic,” Mark Emmert, the president of the N.C.A.A., said in January at the group’s convention in Anaheim, Calif. “We’ve been talking with and exploring whether or not it makes sense to have a congressional solution so that there’s some kind of nationwide resolution to it, and we’re going to have to work our way through that.”

A Senate subcommittee is scheduled to hold a hearing on Tuesday in Washington, where Emmert is expected to be among the witnesses. The Senate panel will not vote on any proposals, but some members of Congress have already introduced bills related to college sports.

Although Emmert spoke carefully last month about whether Congress should play a role in settling the debate, the N.C.A.A. has stepped back from lobbying in the states, and some of the most influential figures in college sports have said they want the federal government to intervene, in part to give legal cover to a multibillion-dollar industry where antitrust issues are a chronic concern.

“It’s important for the working group to look for solutions, but most of those solutions are going to raise issues that will lead to another round of lawsuits without some protection by Congress,” Jere Morehead, Georgia’s president and a lawyer by training, said last month.

Probably not anytime soon. The situation could change quickly, but final action at the federal level may be far away, especially in a year with a presidential election.

Still, the Senate hearing on Tuesday is a signal of the rising interest on Capitol Hill, and lawmakers in both parties have voiced concerns about the N.C.A.A.’s existing rules. Some of those legislators are among the most prominent members of Congress, including Senator Cory Booker, Democrat of New Jersey, and Senator Mitt Romney, Republican of Utah. But top legislative leaders have not openly thrown their weight behind any legislation, and the White House has not committed to supporting any specific proposal, either.

Given the tensions around the subject, a proposal that shows signs of advancing could still provoke fearsome opposition from the N.C.A.A. or its critics. Indeed, some N.C.A.A. skeptics already fear that it will use Congress to put a stop to the most potentially consequential changes to the business model of college sports.

“The N.C.A.A. is hoping that Congress will wipe away what the states are pursuing at this point,” said Ramogi Huma, the executive director of the National College Players Association, an advocacy group for athletes, and another witness at Tuesday’s hearing. “Congress can either expand these rights and freedoms nationwide, or they can eliminate them.”

The 10 Best Performances In The Marvel Movies So Far

Who Is Jordan Love? A High-Risk, High-Reward Quarterback