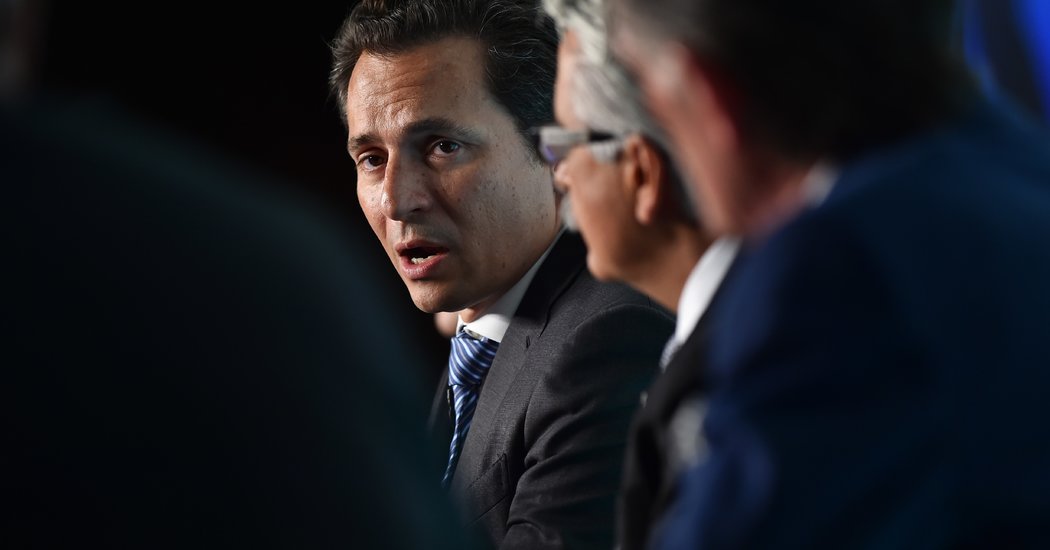 MEXICO CITY — The former head of Mexico’s state-run oil company, who faces charges of tax fraud and bribery, was arrested in southern Spain on Wednesday, officials said, delivering a boost to President Andrés Manuel López Obrador of Mexico in his fight to curb the nation’s endemic corruption.

The former official, Emilio Lozoya Austin, had been on the run since May, when the Mexican authorities accused him of receiving bribes in connection with the purchase of a fertilizer plant by Petróleos Mexicanos, or Pemex, the oil company he led from 2012 to 2016.

Mr. Lozoya has denied any wrongdoing.

The case against Mr. Lozoya, a top ally of Mexico’s former president, Enrique Peña Nieto, stems from a probe into a vast corruption scandal centered on Odebrecht, a Brazilian multinational construction conglomerate. Odebrecht has admitted to doling out about $800 million in bribes to government officials throughout the Americas and elsewhere to secure lucrative contracts.

The Spanish police said Mr. Lozoya was detained near a residential development in Malaga. Mr. Lozoya is believed to have been hiding recently in a luxury residential compound in the upscale seaside resort of Marbella, outside of Malaga, according to several Spanish media reports citing police sources.

Mr. Lozoya is set to appear on Thursday before a judge from Spain’s national court, where he will be asked whether he is ready to return to Mexico to stand trial there. Should he refuse, the Spanish judge could keep him in jail for 40 days, during which time Mexico would have to present a formal request for his extradition.

On Twitter, Spain’s national police described Wednesday’s detention as a result of its “excellent relationship” with Mexican prosecutors.

Last May, Interpol put Mr. Lozoya on a list of fugitives wanted internationally. In July, the German police detained his mother, Gilda Margarita Austin, after the Mexican judiciary accused her of helping to launder money from Pemex. She was deported to Mexico and, in November, a judge confined her to house arrest pending the outcome of her trial on money laundering charges.

Calls seeking comment on Wednesday from Mr. Lozoya’s lawyer were not immediately returned.

The case against Mr. Lozoya centers on Pemex’s purchase of a fertilizer plant that was out of service when Pemex bought it from Altos Hornos de México, or Ahmsa, a major Mexican steel manufacturer, for $475 million. Critics of the purchase said the cost was wildly inflated.

Mexican investigators scrutinized a series of money transfers associated with the purchase that they say implicated Mr. Lozoya, including a transfer of $3.6 million that was sent by Ahmsa to a shell company in Switzerland that was connected to Mr. Lozoya.

Officials have said that Ahmsa transferred the money to the shell company via a subsidiary of Odebrecht and suspected the transfer was a bribe.

The Mexican authorities have also been looking more broadly at Mr. Lozoya’s dealings with Odebrecht, which admitted to American, Brazilian and Swiss investigators in 2016 that it had paid $10.5 million in bribes to Mexican officials.

As the Odebrecht scandal unfolded, bringing down top government officials elsewhere in Latin America, the administration of then-President Peña Nieto refused to bring charges in order not to jeopardize its party’s chances in the 2018 presidential election, according to Mexican officials at the time.

But Mr. Peña Nieto’s party lost, and Mr. López Obrador, who won a landslide victory in part by vowing to tackle corruption, appeared to move quickly to make good on his promises, at least regarding the case against Mr. Lozoya.

In a radio interview in Mexico on Wednesday, Alejandro Gertz Manero, Mexico’s attorney general, called the case “iconic” and said the hunt for Mr. Lozoya was a collaborative effort with the law enforcement authorities of Spain and other countries, including Germany.

“After a long pilgrimage throughout Europe — with the arrest warrant and Interpol’s fundamental support and, in this case, the Spanish police, who have behaved in an excellent manner — we achieved the detention of this individual,” he said.

8 Marvel Characters Henry Cavill Would Be Perfect To Play