HONG KONG — The news was abrupt and, to some, surprising: Overnight, Heilongjiang, a Chinese province near Russia, had cut its count of confirmed coronavirus cases by more than a dozen.

The revision stemmed from what appeared to be a bureaucratic decision, buried in a series of dense documents from the national government. Health officials said that they would reclassify patients who had tested positive for the new coronavirus but did not have symptoms, and take them out of the total count of confirmed cases.

The documents offered little detail or explanation, and skepticism was immediate. A Hong Kong newspaper called the decision a “disguise.” World Health Organization officials seemed caught off guard when asked about the move at a news conference this week.

The change in counting cases is only one factor that has made it difficult for experts to determine the true scale of the epidemic. The tally so far is that the coronavirus has killed at least 1,100 people and sickened more than 44,000, but experts say definitive numbers are elusive.

In the days since the changes emerged, several virus experts around the world have said that the reclassification was a minor change, even a typical move during new outbreaks. Other experts questioned the revision.

The wary response in some quarters underscores that mistrust of the Chinese government remains pervasive.

“It’s pretty clear that there is an issue with trust about whatever the Chinese government comes out with at the moment,” said Kerry Brown, a former diplomat and director of the Lau China Institute at King’s College, London.

“That may be terribly unfair,” Mr. Brown said. But, he added, “to redefine things — even legitimately — at a moment like this is always going to be a presentational challenge, because people are going to be very sensitive, and they’re going to suspect there’s another agenda.”

Heilongjiang’s officials were not the only ones to shift their tallies of confirmed cases. Hangzhou, a city in eastern China, reduced its count by 12 on Sunday because the patients did not live there. Hubei, the province at the heart of the outbreak, recently reduced its confirmed case number by 87 with little explanation.

In all, China’s National Health Commission has retroactively subtracted at least 118 cases.

But the change in how cases are classified could mean even steeper changes in the totals going forward. 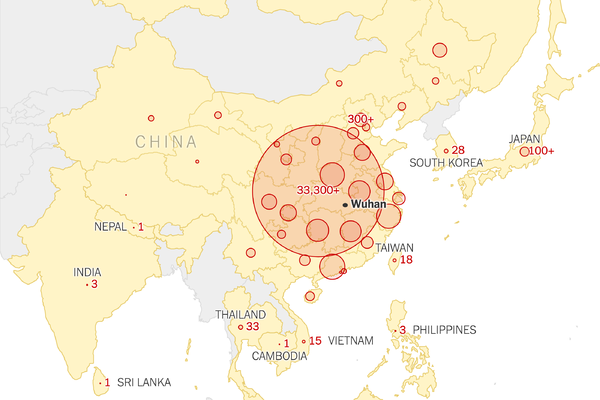 The virus has sickened more than 45,100 people in China and 24 other countries.

The shifting case counts are not the only example of conflicting or spotty information. Researchers have given differing estimates on when the outbreak might peak, ranging from a date already past to several months in the future. The Chinese authorities have closely guarded the demographic details about the fatalities, creating uncertainty about who is most susceptible.

The uneven information comes as China’s leader, Xi Jinping, said that the containment efforts were working. “After hard work, the epidemic situation has seen positive change, and the prevention and control work has achieved positive results,” he said during a meeting of the Communist Party leadership in Beijing on Wednesday, according to a summary of his remarks by state-run media. “This is hard-won, and all parties have contributed.”

China’s reported count of new infections on Tuesday was its lowest in a single day since Jan. 30. But experts cautioned that it is premature to draw any conclusions from the figure.

The changes to the classification of asymptomatic coronavirus cases emerged on Jan. 29, in a set of guidance from China’s National Health Commission. The agency said that it would no longer count patients who had tested positive for the coronavirus but did not display symptoms as “confirmed cases.” Instead, those patients would be counted separately, as “positive diagnosis” patients, and would become confirmed only if they began showing symptoms.

Chinese health officials have given little public justification for the labeling change. The National Health Commission did not immediately return a request for comment. Reached by phone, Wu Zunyou, the chief epidemiologist of the Chinese Center for Disease Control and Prevention, directed inquiries to the health commission’s news office.

The changes prompted debate among some public health experts.

“Adapting definitions during an outbreak is not unusual, with increasing insights and also with prioritizing where efforts need to go,” said Dr. Marion Koopmans, the head of the viroscience department at Erasmus University Medical Center in the Netherlands. By shifting emphasis away from asymptomatic cases, officials can concentrate resources on more serious cases, she said.

Dr. Benjamin Cowling, who leads the division of epidemiology and biostatistics at the University of Hong Kong, said the number of cases affected by the change in terminology would most likely be low.

Still, even experts who said that the effect of discounting certain cases would be small said that it would be useful to epidemiologists — and the public — to have a complete count of all cases, including asymptomatic ones.

Dr. Malik Peiris, the chair of virology at the University of Hong Kong, said in an email that mild or asymptomatic infections could form an “invisible iceberg” that made a given virus’s fatality rate much lower than it initially appeared.

Determining the true denominator of the number of people infected — whether symptomatic or not — would, he said, “be most informative to, hopefully, calm current panic in China and the world.”

In a sign of just how much the change could further muddle public understanding of the virus, even the W.H.O., which has praised the Chinese government for its cooperation in fighting the outbreak, expressed confusion.

“We’re not aware of that change. Certainly not a change that would discount lab-confirmed cases,” Dr. Michael Ryan, who leads the W.H.O.’s health emergencies program, said when asked this week about the labeling change. “That sounds strange.”

Dr. Chen Bingzhong, a former senior government health official in Beijing who has been vocal in calling for more transparency about public health crises, said a full tally of the number of cases would keep the authorities accountable.

He added that a positive test result should be disclosed as such, regardless of symptoms.

“Testing positive means it is the new coronavirus,” he said. “If you don’t recognize it, you are covering the truth.”

In Fight to Stop Human Trafficking, Nuns Take to the Streets

China Created a Fail-Safe System to Track Contagions. It Failed.

Trump Was Furious That Cruise Ship Passengers With Coronavirus Were Brought...

Accelerating tech Europe: "Essentially, we are a public venture capitalist"

‘Will We Die Hungry?’ A Teeming Manila Slum Chafes Under Lockdown