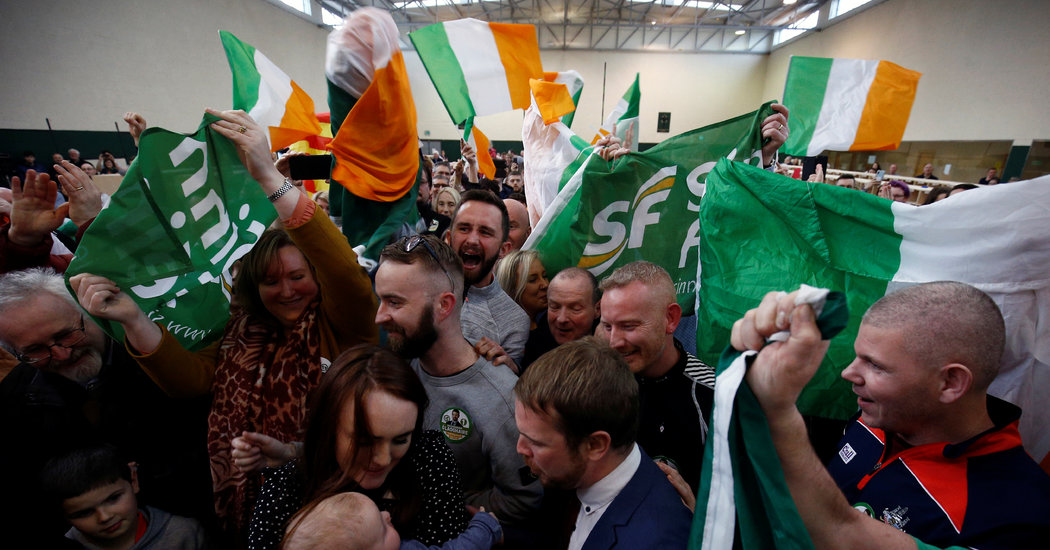 DUBLIN — In a century-old political system controlled by two seemingly indistinguishable center-right parties in Ireland, Jamie Clarke did what seemed sensible to him: He never voted in a general election.

“Fianna Fail and Fine Gael were the people that made the decisions, and someone like me could never change it — that’s the way it felt,” Mr. Clarke, a 33-year-old bartender, said on Monday, referring to the Irish political duopoly that has traded power since 1932. “I was so disaffected by how far they were from me.”

But in recent years, successive public votes in Ireland to legalize same-sex marriage and repeal an abortion ban have pulled many young and dissatisfied people into politics, giving voters a chance to shake up traditions that were once rigidly enforced by the Roman Catholic Church. Their next target was Ireland’s ossified political hierarchy.

On Saturday, voters cast off that relic, too, ending the two-party stasis in Irish politics with a breakout vote for Sinn Fein, a party long shunned by the mainstream for its ties to the Irish Republican Army, a paramilitary group that sought the reunification of Ireland. Despite what he called the party’s “shady history,” Mr. Clarke said, he voted for Sinn Fein because he felt it was the tonic that Irish politics needed.

“Before the abortion referendum, I was like, ‘Ah, everyone’s going to know we’re bigots and narrow-minded,’ and then we showed we weren’t,” he said, sitting at a central Dublin pub on a night off. “Now we’re showing again that we’re not afraid to have our voices heard.”

The vote sent a tremor through a political system that had long defied the usual left-right divisions across Europe. But for all the disruption, what emerged from the wreckage was, by European standards, a much more normal-looking system, anchored by rival parties on the left and the right.

“For the first time in 100 years, it’s possible you’ll have a party that calls itself left-wing leading a government,” said Eoin O’Malley, an associate professor of political science at Dublin City University, referring to Sinn Fein.

By the time the votes were counted this week, Sinn Fein held one fewer parliamentary seats than Ireland’s main center-right opposition party, Fianna Fail, which had been expected to romp to victory. And it captured two more seats than the current center-right governing party, Fine Gael, led by Prime Minister Leo Varadkar, Ireland’s frontman in negotiations with London over Britain’s withdrawal from the European Union.

Tortuous coalition negotiations in the coming weeks will determine who, if anyone, can command enough support to lead the next government. But lawmakers from across the political spectrum conceded that the vote for Sinn Fein reflected the desire of a huge cohort of voters — young and old, urban and rural, working-class and middle-class — for new alternatives in a system that had long stamped them out.

There was one issue above all that drove Mr. Hayes’s anger at Ireland’s two old political heavyweights and endeared him, like many voters, to Sinn Fein: housing. The number of homeless people has been rising for years, eclipsing 10,000 in 2019. And average rents have increased by as much as 40 percent in some counties over the past three years.

Young people, especially, are suffering, with some leaving bigger cities like Dublin or moving out of Ireland altogether. Mr. Clarke said that many of his friends had been forced to move back in with their parents. He had lived in a central Dublin neighborhood for five years before high rents drove him out to a suburb.

Sinn Fein’s success extended well beyond its core group of young and urban voters, though. Rural seats that had not been represented in a century by a Sinn Fein lawmaker joined inner-city Dublin districts in electing representatives from the party. And Sinn Fein became the most popular party among every age group up to 65, according to exit polls.

Ailbhe Smyth, 73, a political activist and feminist scholar who played a leading role in the campaign to repeal Ireland’s abortion ban, said that many were feeling the anguish of a crisis that had forced people to wait weeks or years for some medical appointments, despite the government’s lavish spending on health care. She said older people, too, had woken up to the pain that Ireland’s cultural and political norms had inflicted on the younger generations.

While power was passed back and forth between the two center-right parties, parts of Irish identity, such as the expectation that people could grow up to own their own homes, began to vanish. And just as Ms. Smyth said the vote for abortion rights had been driven in part by “a very deep sense of national shame at the way women had been treated historically in this country,” she said that the turnout this weekend reflected the regret of some voters for not vanquishing an outdated political system sooner.

“Older people voting for Sinn Fein are saying, ‘Well, actually, my son, my daughter, my grandchildren, they haven’t got a house,’” Ms. Smyth said. “So there is that feeling of guilt that we’re not leaving them a very good world — and we’ve wrecked the planet, too.”

Facing up to rivals like Mr. Varadkar, who focused during the campaign on Brexit achievements that few voters cared about, Sinn Fein stuck to a few clear, tangible promises. And rather than harping on the government’s failures, as it recently had during unsuccessful campaigns, the party tried to home in on what it would get done. It vowed, for instance, to spend 6.5 billion euros, about $7 billion, building 100,000 homes.

It also drew in supporters with a new leader, Mary Lou McDonald, a 50-year-old Dubliner who helped shed the party’s reputation for having predominantly male supporters and who pushed it to liberalize its position on abortion rights. In 2018, she succeeded Gerry Adams, who is from Northern Ireland and who is widely reported to have once served as chief of staff to the I.R.A., though he has always denied that.

Still, Sinn Fein may find it difficult to maintain its momentum. Analysts expressed doubt that it could quickly build its way out of Ireland’s housing crisis, given the challenges facing a construction industry that is already near capacity. The country would need an influx of foreign workers to keep pace with demand, analysts have said, a development that would itself stress the housing market as new workers looked for their own places to live.

The party also has to balance the desires of a traditional base that is hungry for Irish unity with newer voters who flocked to it because of issues like housing and homelessness. That tension became evident in recent days as some candidates faced criticism for singing songs or using slogans associated with the fight for a united Ireland, reminders to some voters of the party’s ties to anti-British violence.

But some of the party’s younger activists have been trying to build a bridge between the party’s past and its future.

Fintan Warfield, 27, credits Irish music with politicizing him as a teenager. He said he came to see Sinn Fein not only as the best hope for a united Ireland, but also as a party with “empathy on other issues and compassion for other marginalized groups.”

Mr. Warfield joined the party at 16, a time when Sinn Fein was largely ignored by mainstream Irish politicians. At that time, he kept his work for the party more private, slipping out of the house to canvass for a Sinn Fein city councilor. Now, Mr. Warfield, who is gay, is a Sinn Fein senator and prominent campaigner on lesbian, gay, bisexual and transgender rights.

He said that Sinn Fein’s years of work on the margins of Irish politics — resolving local housing disputes, campaigning in cattle markets far from Dublin for same-sex marriage — had laid the seeds for its surge this week.

“Now that people have said, ‘OK, Fine Gael and Fianna Fail have had their chance,’” he said, “all those years of work have amounted to this.”

The Hidden M.V.P. of the Super Bowl? J. Lo’s Choreographer

Amazon Flex drivers won’t be paid if they have to stay...

The Driving Force in Irish Politics? Finding a Decent Place to...

What to Bring on Vacation if You Want to Learn How...

Glastonbury Festival Canceled Because of Coronavirus

Spread of Virus Could Hasten the Great Coming Apart of Globalization