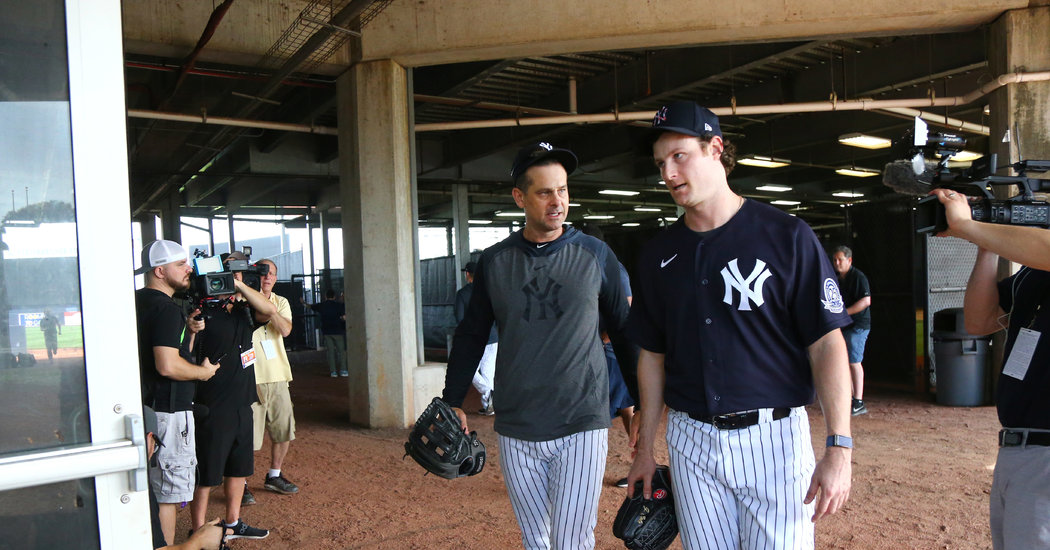 TAMPA, Fla. — As the Yankees’ pitchers and catchers reported to spring training on Wednesday, they had plenty to be excited about. With their talented roster largely healed from the injury nightmare that was the 2019 season, and the addition of perhaps baseball’s best pitcher in Gerrit Cole, the Yankees entered camp as the favorites to win the 2020 World Series — just a touch ahead of the Los Angeles Dodgers.

But on Day 1 of spring training, they weren’t quite ready to talk optimism and championship dreams. They still had some grievances to air.

Like everyone around the baseball world and beyond, Yankees players and coaches have spent much of the off-season watching the fallout from the Houston Astros’ electronic sign-stealing scandal. And as they reconvened here this week for the first time since being eliminated by the Astros in the American League Championship Series last fall, Manager Aaron Boone said it was important for any of his players who wanted to get something off their chests to do so now.

Some, Boone said, had already done so over the winter, in text messages or conversations with him.

“The range of emotions has been huge,” he said on Wednesday. “You’re mad, frustrated, disappointed.”

Because the Yankees have been processing the Astros scandal and the what-ifs for weeks, Boone said some players had already moved on, while others still wanted to voice their feelings. He added, “But at some point, very soon, it’ll be important for me that we move forward.”

Soon after Commissioner Robert Manfred issued his report on the scandal and punished the Astros, C. C. Sabathia, the longtime Yankees starter who retired after last season, said he felt he and his teammates had been cheated out of a World Series by the Astros, who also beat them in the 2017 A.L.C.S. Masahiro Tanaka, the normally reserved Yankees pitcher, agreed earlier this week.

Gary Sanchez, the Yankees’ starting catcher, and thus the person most responsible for helping protect his team’s signs, said it was tough learning the truth about the Astros’ schemes. “We thought we were doing things well, but they had something else to decipher what we were doing quickly,” he said.

Manfred’s report said the Astros had illegally used a live-video feed during games to decode opponents’ signs and immediately communicate the next pitch to their hitters, sometimes by banging on a trash can. Sanchez said he might have heard those sounds during the 2017 season, but since he was only in his first full season in the major leagues, he didn’t have much experience with sign stealing.

But he learned a lot this off-season, he said, watching any videos detailing the Astros schemes that popped up on his social media feed over the winter. And even though M.L.B. said it had found no evidence of Houston cheating in 2019, many remained unconvinced, including some of the Yankees.

Boone said he still wasn’t sure the Astros did not use hidden buzzers to communicate the signs in 2019 — a much-discussed but unproven theory that emerged after Manfred’s report.

“That’s certainly one of those great unknowns, and I’ve spent time, as I’m sure a lot of people have, wondering all the things that could’ve potentially been going on,” Boone said, “and probably we’ll never know for sure.”

Asked if he thought Jose Altuve knew which pitch was coming when he slammed a game-winning home run off Aroldis Chapman in Game 6 of the 2019 A.L.C.S., Sanchez said he wasn’t sure. But he offered one humorous thought on a scene that has spurred much of the discussion of hidden buzzers: Altuve’s refusal to let his teammates rip off his jersey in celebration after he hit that homer — a clue to Astros doubters that Altuve had something hidden underneath. (Altuve has denied using a buzzer.)

“If I hit a home run at Yankee Stadium to send my team to the World Series, if they want to, they can take off everything, even my pants,” Sanchez said, laughing.

Luis Severino, the Yankees pitcher who allowed six runs in 13 postseason innings against the Astros in 2017 and 2019, said he was angry when he first learned of the cheating, especially because he had spent so much time trying to figure out if he was tipping his pitches. But he struck a far more conciliatory tone on Wednesday.

“They don’t have to apologize to me,” he said. He commended a former Astro, Marwin Gonzalez of the Minnesota Twins, for apologizing on Tuesday for his role in the cheating scheme. “For me, it’s already in the past. I have to focus on 2020. Because we can get mad, we can get anything, but we can’t change the past.”

Unlike Severino, Boone was still wrestling with those events. Boone, who took over as manager in 2018, said he still considered three central figures of the scandal — A.J. Hinch, the former Astros manager; Carlos Beltran, a former Astros player and a Yankees special assistant last year; and Alex Cora, a former Astros coach and Boone’s former ESPN colleague — to be his friends. Boone even briefly texted with Hinch after the allegations surfaced, he said.

But Boone admitted he might never fully come to peace with his emotions about the scandal and those three men. “As human beings, we all fall down and all fall short,” he said.

The Yankees were bounced in recent years from the playoffs not only by the Astros but also by the Boston Red Sox, who are currently under investigation by M.L.B. for illegal sign stealing as well. Boone stopped short of blaming opponents’ misdeeds for those early exits, though, saying the blame still lay with the Yankees.

This season could end differently for one notable reason: Cole, a former Astro.

“We feel like we’ve been a championship-caliber team now for a few years and have been knocking on that door,” he said. “Haven’t pushed through yet. Adding a guy like Gerrit, there’s no running from the fact that this is an elite player and taken away from one of the teams that we’ve been competing with so heavily. So we’re excited to have him and know what kind of impact he can potentially make.”

A Socially Distanced Las Vegas? What Are the Odds?

Two Months Later, the Iditarod Champion May Finally Get a Ride Home

Keeping Clients Fit During the Pandemic by Going Virtual

Patreon will now give creators cash advances on their subscription money

You can now take up to 12 ounces of hand sanitizer...

In Italy, Going Back to Work May Depend on Having the...

A Victory in Court for Pipelines but the Debate Continues

Sabrina Ionescu Comes Up Big in Moments On and Off the...