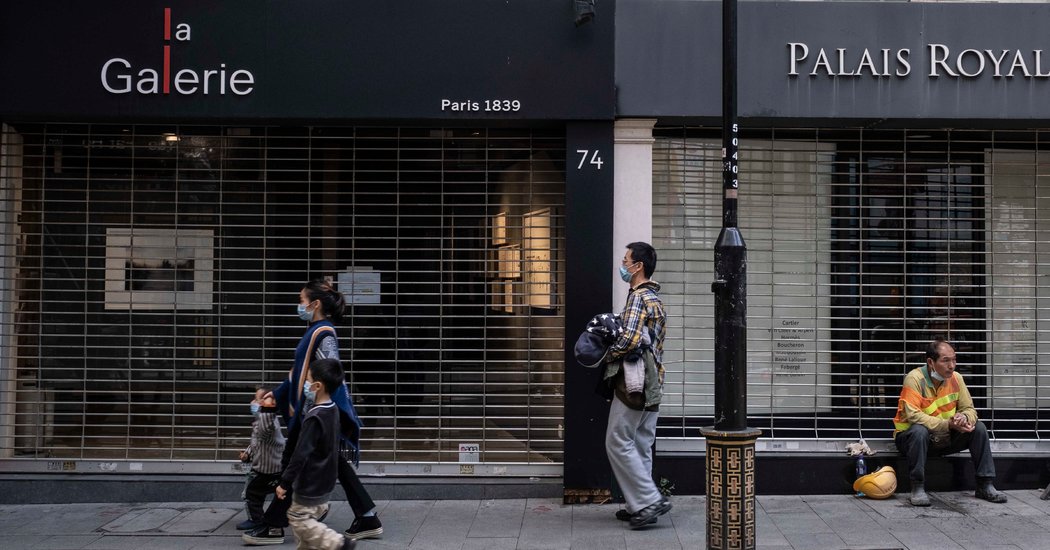 A single Chinese billionaire, an investor and former taxi driver named Liu Yiqian, has spent at least $200 million on art in recent years, including $170 million for a Modigliani nude in 2015.

With China as the second-largest market for the global movie industry, approval or rejection by the government in Beijing can make or break a movie’s bottom line.

Orchestras from around the world plan tours of China years in advance, seeing them as a way to sell tickets, raise their profile and cultivate China’s growing wealthy class as donors.

But now, as China struggles to get the coronavirus epidemic under control, the country is essentially closed for business to the global arts economy, exposing the sector to deep financial uncertainty. Movie releases have been canceled in China and symphony tours suspended because of quarantines and fears of contagion. A major art fair in Hong Kong was called off, and important spring art auctions half a world away in New York have been postponed because well-heeled Chinese buyers may find it difficult to travel to them.

“It’s just not realistic to plan to offer things that are objects we know people want to see in person during a time when they can’t get here,” said Lark Mason, the founder of iGavel, one of six auction houses that have postponed many of their sales. “It does mean we have to scramble a bit because, OK, we don’t have this amount of revenue coming in. What are we going to do to fill the gap?”

The virus has infected more than 48,000 people and killed more than 1,350 in China. As tens of millions of people are sealed off in cities there, new questions are emerging about how the virus, named SARS-CoV-2, is transmitted. Even art dealers who expect business to suffer because of closed borders and mandatory quarantines say they understand that stopping the contagion comes first.

Still, there will be a financial impact. China was the third-biggest art market in the world in 2018, according to last year’s Art Basel and UBS Global Art Market Report, accounting for 19 percent of the $67 billion spent on art that year. (The United States, at 44 percent, and United Kingdom, at 21 percent, had the top two spots.)

Last week, Art Basel Hong Kong, an annual art fair scheduled for mid-March, was canceled, depriving dealers and artists of a major opportunity to show works to customers based in China and beyond. The fair attracts droves of visitors who descend on the region for art shows, cocktail gatherings and yacht parties in Hong Kong, Beijing, Shanghai, Hanoi and Tokyo before, during and after the fair. Some of these have been postponed or canceled as well.

In Hong Kong, the cancellations come after months of political protests that have convulsed the city and left much of the territory on shaky footing.

Ben Brown, a gallery owner with locations in London and Hong Kong, said that his shop has made a big profit every year at Art Basel Hong Kong, and this year, that bump will disappear. But the damage will go beyond immediate sales.

“It’s the center of the artistic universe for a week, and it leads to other things during the year,” he said. “Imagine if you had to cancel the Oscars. The film world would carry on, and films would carry on either making money or losing money, but it’s a major blow.”

Galleries that had planned to exhibit at Art Basel Hong Kong were offered a refund of 75 percent of their booth fees, which run to $125,000 for the largest spaces. Besides forfeited fees and lost sales, galleries are bleeding money in other ways. Cliff Vernon, director of the contemporary division of Gander & White, which ships fine art, said that there were two shipping containers currently at sea that had been on their way to Art Basel carrying pieces from five dealers. Now, the galleries will have to pay to ship it back, at a cost of about $15,000 for the return trip.

China is also critical for the movie business, a $9 billion annual market second only to North America, according to Paul Dergarabedian, a senior analyst at Comscore, a media measurement company. But with most movie theaters in the country closed, he said, that business is almost entirely on hold. Releases of “Jojo Rabbit” and “Dolittle” — a box-office bomb in the United States that desperately needs foreign sales — are among those postponed in China so far.

“There’s no question there are going to have to be footnotes as far as the box offices goes this year,” Mr. Dergarabedian said. “The longer this goes on, the bigger an issue it becomes.”

With China’s emergence as the fastest-growing market for classical music in recent years, the ripple effects of the virus crisis were quickly felt across that field as well.

Several American ensembles, including the Boston Symphony Orchestra and the National Symphony Orchestra, based in Washington, canceled planned tours of China. The Juilliard School, which is preparing to open a branch in Tianjin this fall, announced that it was suspending all in-person admissions-related activities in Asia until at least March. And the ambitious monthlong Hong Kong Arts Festival, which would have assembled leading orchestras, opera companies, soloists and dance companies from all over the world, was canceled.

The economic impact is still being gauged. American orchestra tours are expensive, complicated undertakings that are planned years in advance; fees they earn from foreign hosts generally cover only part of what it costs to ship roughly a hundred musicians and their instruments thousands of miles. But orchestral tours of China have proved especially attractive to sponsors interested in cultivating relationships there — and whose financial support makes such tours possible.

“You try to break even with sponsorship dollars,” said Michael M. Kaiser, the chairman of the DeVos Institute of Arts Management at the University of Maryland.

The Boston Symphony said that the tour it canceled was expected to cost approximately $2.1 million, including artist fees and expenses; security; lodging; airfare; and transporting the trunks and instruments of orchestra members. The administration has been hoping to speak with vendors about waiving or reducing some fees, but with the crisis it has been difficult to get through to some of them.

Even institutions that are far less dependent on Chinese patrons, like the Metropolitan Museum of Art and Broadway theaters in New York City, say they are watching the situation carefully. Chinese tour groups have been suspended, and if the virus spreads widely, other travelers themselves may decide to stay home. In Paris, the Louvre said it had not yet seen a drop in visits, but according to the museum’s most recent figures, 800,000 of its 10 million visitors in 2018 came from China.

Art galleries are not completely reliant on foot traffic and fairs; thanks to the internet and her phone, Emerald Mou, a partner at the Hong Kong gallery Mine Project, said that half the current show at her gallery has now sold through email, WhatsApp or WeChat. (Ms. Mou also said she was recently able to negotiate with her landlord for a five percent reduction on her rent for two months.) Mathieu Borysevicz, a director of the BANK gallery in Shanghai said that he had just sold a painting on WeChat to a collector who was at home, bored, in Beijing.

But Mr. Borysevicz also said that a collector in Thailand had canceled a purchase not long ago, saying it was because of the virus that he could not buy the piece.

Many high-end auction bids are delivered by phone, as was the record-setting Modigliani purchase Mr. Liu made at Christie’s New York. But buyers often like to see what they’re bidding on beforehand. And right now, Chinese buyers can’t easily visit the marble Sui dynasty Buddha head (estimated to sell for $500,000 to $700,000) or the 17th-century incense stand ($800,000 to $1,200,000) that Christie’s in New York had planned to offer this spring. The auctions held every March at Christie’s, Sotheby’s and elsewhere in New York City have been postponed until June.

The virus comes at a particularly difficult time because any art that originated in China has been subject to a 15 percent tariff for months (they will be lowered to 7.5 percent on Friday) as a result of President Trump’s trade standoff with Beijing, which means it is now harder not only for dealers to sell art, but also to buy it.

“For my exhibition next month, I would say more than half of it was acquired outside the United States, so to bring that in and add 15 percent, that’s what we used to call the profit margin,” said James Lally, founder of J.J. Lally & Co. in Manhattan, a gallery that specializes in Chinese art.

“It’s two unfortunate things on top of each other that affect opposite ends of the market,” he added. “It’s not a good time.”

Reporting was contributed by Michael Cooper and Michael Paulson from New York; Jacob Dreyer from Bangkok; Constant Meheut from Paris; and Scott Reyburn from London‏.

Sharapova Uncertain About Future After Loss at the Australian Open

Coronavirus updates: All the major tech conferences cancelled so far

The Babies Were Delivered. No One Realized the Mothers Had the...

Major League Soccer Reaches a Deal With Its Players

Thich Quang Do, Defiant Rights Champion in Vietnam, Dies at 91

Past Into Present: 4 Journeys That Changed Us