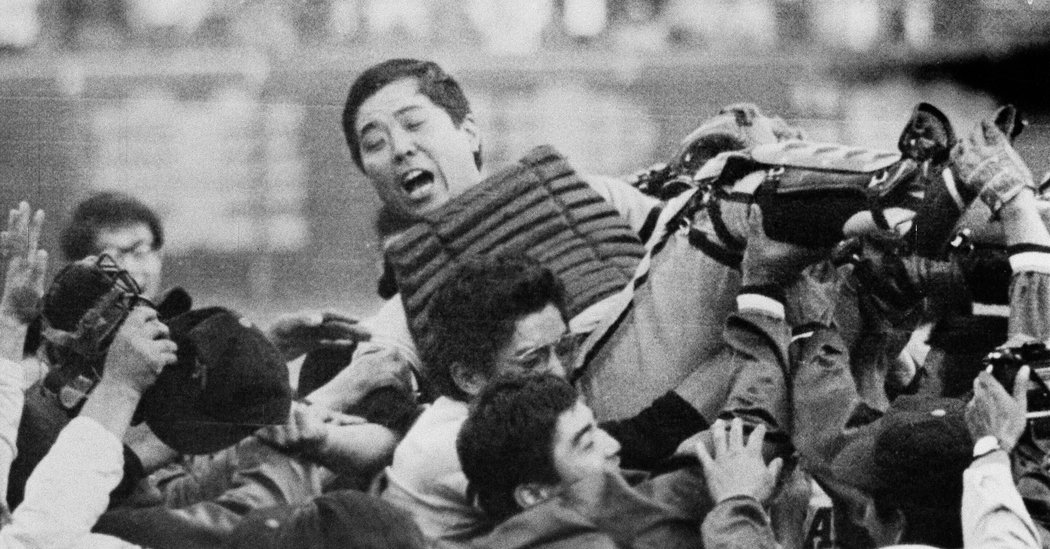 Katsuya Nomura, a mainstay of the baseball world in postwar Japan who was one of the country’s greatest catchers before going on to a long second career as a manager, died on Tuesday in Tokyo. He was 84.

The cause was a heart attack, his son Don Nomura said.

In his 26 years as a player and a player-manager, Nomura hit 657 home runs and had 1,988 runs batted in, both second on the all-time list to the great slugger Sadaharu Oh. He also collected 2,901 hits in 3,017 games, also the second-highest totals in Japan.

Nomura’s best season was 1965, when he became the first Japanese player in the postwar era to win the triple crown, hitting 42 home runs, driving in 110 runs and batting .320. He led the Pacific League in home runs nine times and was the league’s Most Valuable Player five times.

He was voted the best catcher in Japanese baseball 19 times and elected to Japan’s Baseball Hall of Fame in 1989.

For all his success on the field, though, Nomura never achieved the celebrity status of stars like Oh and Shigeo Nagashima, who played for the more glamorous and successful Tokyo Yomiuri Giants of the Central League.

Nomura spent the bulk of his playing days with the Osaka-based Nankai Hawks. (The team later moved to Fukuoka and is now owned by the technology giant SoftBank.) The Hawks dominated the less popular Pacific League during most of Nomura’s tenure with the club, winning two championships but also losing four times to the Giants.

“When I first met him, he was the all-time leading home run hitter, but I had never heard of him,” Don Nomura said of his future stepfather. (Katsuya Nomura later adopted Don and his brother Kenneth, the sons of his second wife.) “All I knew was Oh and Nagashima, because they were always on TV. I had to go to the bookstore and look him up.”

Nomura’s stature grew after he retired as a player at 45 in 1980. He became a full-time manager after a decade as a baseball analyst, starting with the Yakult Swallows, perennial cellar-dwellers who also played in the shadow of the Giants, their crosstown rivals in Tokyo.

According to Robert Whiting, who has written about baseball in Japan for five decades, Nomura learned about the use of statistics from his Hawks teammate Don Blasingame, who had also served as a head coach during Nomura’s tenure as player-manager, from 1970 to 1977. Nomura used that knowledge to lead the Swallows to championships in 1993, 1995 and 1997. (He had also won a Pacific League crown with the Hawks in 1973.)

Nomura spent three years with the Hanshin Tigers, from 1999 to 2001, but resigned after his second wife, Sachiyo, a television commentator, was convicted of tax evasion. (He stepped down as manager of the Hawks in 1977 because of reports that his wife meddled in club affairs.)

After managing in Japan’s industrial league from 2003 to 2005, Nomura returned to the pro ranks in 2006 to manage the Rakuten Golden Eagles, who had entered the Pacific League a season earlier. After three losing seasons, the Eagles made the postseason in Nomura’s fourth and final year with the team.

Nomura was often called “Grumpy Grandpa” for his gruff and unsparing manner. Some players felt the tough love helped them.

“Nomura taught me what pitching is and what baseball is from scratch,” said the Yankees pitcher Masahiro Tanaka, who started his career with Rakuten. “That I met Nomura from my first year as a pro when he instructed me was the luckiest thing in my baseball life.”

Other players saw Nomura’s style differently, particularly those he berated in person and in the news media. He was also cold to some foreign players, according to Robert Whiting. After taking over the Swallows, Nomura released Larry Parrish, who had led the league in home runs the year before. He also released Tom O’Malley, who hit over .300 in his two seasons with Yakult. When the Hanshin Tigers refused to release the pitcher Darrell May in 1999, he issued a statement that accused Nomura of being xenophobic.

Katsuya Nomura was born on June 29, 1935, in Amino, a town in Kyoto Prefecture near the Sea of Japan. Nomura’s father, who was stationed in China, died when his son was a young boy.

After graduating from Mineyama High School, Nomura joined the Nankai Hawks. He went hitless in nine games in 1954 and was demoted for a season, then returned to the top club for good in 1956.

Nomura had one son, Yoichi, with his first wife. He and his second wife, Sachiyo, had a son, Katsunori Nomura, a backup catcher who is now a coach with Rakuten. Nomura adopted Sachiyo’s sons after he married her. She died in 2017. In addition to his sons, Nomura is survived by seven grandchildren.

After he retired from baseball, Nomura became a television analyst and at times was overshadowed by his wife, who had become a celebrity for her caustic commentary. Though he was crestfallen after she died, baseball remained in his blood until the end.

“Nomura minus baseball equals zero,” he once said. “There would be nothing left if you take baseball away from me.”

Trump Was Furious That Cruise Ship Passengers With Coronavirus Were Brought Back to U.S.

‘We’re in a Petri Dish’: How a Coronavirus Ravaged a Cruise Ship

Adapting to Rising Seas, Schools Move to the Rafters and Cats Swim

How Bad Will the Coronavirus Outbreak Get? Here Are 6 Key...

The FCC’s broadband survey is missing 20 million people, a new...

Shootout Between U.S. and Afghans Kills Soldiers on Both Sides

Google is Working on Chatbots Which Can Engage in a More...

The Test a Deadly Coronavirus Outbreak Poses to China’s Leadership