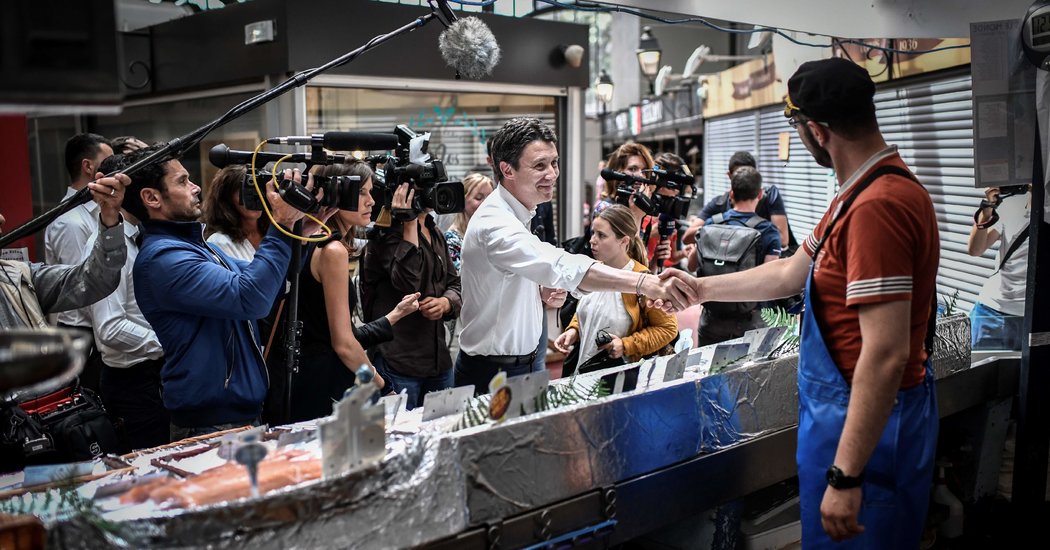 PARIS — A member of President Emmanuel Macron’s party on Friday withdrew from the race for Paris mayor after private sexual videos he allegedly sent to an unidentified woman were published online by a Russian dissident artist who was granted political asylum in France.

The withdrawal of the candidate, Benjamin Griveaux, who blamed “vile attacks” against him and his family, was a sharp blow to Mr. Macron’s efforts to rally his party for coming municipal elections across the country in which he is expected to do poorly.

The race in Paris had been considered, initially at least, a rare potential victory for Mr. Macron’s party, La République en Marche, or Republic on the Move. With Mr. Griveaux’s withdrawal, the president’s plans for Paris have been thrown into disarray.

Mr. Griveaux, 42, announced he was dropping out after the videos began emerging publicly on Wednesday evening. The newspaper Libération reported that the videos were first circulated online by Pyotr Pavlensky, a Russian performance artist who has become notorious in Europe for his dramatic acts of protest. He once set fire to the entrance of the Bank of France in 2017, for which he received a three-year prison sentence, two of them suspended.

Mr. Pavlensky told Libération that he had published the videos to expose Mr. Griveaux as hypocritical because the candidate invoked “family values” and “always mentioned his wife and children as an example” during the campaign.

“I don’t mind people having the sexuality that they want,” Mr. Pavlensky said, “But he wants to be the head of the city and he is lying to voters.”

Mr. Griveaux has been one of the most visible members of Mr. Macron’s party. He was the face of the government on television, having served as its chief spokesman from the early months of Mr. Macron’s presidency until last spring, when he resigned to run for mayor of Paris.

The end of Mr. Griveaux’s campaign has all but dashed Mr. Macron’s hopes of taking the city, long dominated by the French left, away from Anne Hidalgo, the current Socialist mayor. Mr. Griveaux was central to Mr. Macron’s efforts: Over the past few months, he attempted to build a local power base in the French capital and rally support among local politicians from both the left and right.

His departure from the race also comes at a troubled time for Mr. Macron’s party, as some of its representatives in the French Parliament are trickling away, threatening the president’s majority. Some 13 have either left — citing disillusionment with the president — or have been kicked out since the beginning of Mr. Macron’s presidency, with the latest departure taking place a week ago.

But lately, Mr. Griveaux’s campaign in Paris had been performing poorly, with polls showing him trailing Ms. Hidalgo and the candidate of the right, Rachida Dati. In the French news media, Mr. Griveaux was criticized for seeming distant and arrogant, even though he tried to capitalize on his status as a young married father of three.

Mr. Macron’s attempt to intercede in his favor ended in failure last month, when he tried to persuade the dissident Republic on the Move candidate Cédric Villani, a prominent mathematician-turned-politician, to leave the mayor’s race. Mr. Villani was kicked out of the party after rebuffing Mr. Macron’s efforts, which was seen as a humiliation for the president.

In France, unlike in the United States, the private lives of politicians and candidates are widely seen as being out of bounds in elections, and the publication of the videos was swiftly and widely condemned. Mr. Macron’s interior minister and close ally Christophe Castaner quickly said that the online publication of the video should “obviously be prosecuted.”

Mr. Pavlensky could face up to two years in prison and be fined up to 60,000 euros if he is convicted of publishing the videos. Under French law, it is illegal to publish or share sexual images or videos online of someone without their consent.

It was not clear how he had obtained the videos, which purport to show a private text conversation that included sexual videos sent from Mr. Griveaux to an unidentified woman. Mr. Pavlensky, who received asylum in France in 2017 after criticizing the Russian state, could not immediately be reached for comment.

A grim-looking Mr. Griveaux responded to the release of the messages in a video statement on Friday morning, saying, “It has gone too far.”

He did not explicitly refer to the videos, but said that for the past year his family had been “subjected to defamatory statements, lies, anonymous attacks, the disclosure of stolen private conversations, as well as death threats.”

Mr. Griveaux said that a “new stage” had been reached after a “website and social media” began circulating “vile attacks” involving his private life. He added: “My family does not deserve this. No one, fundamentally, should be subjected to such violence.”

His withdrawal prompted dozens of people across the political spectrum to express their support and to denounce what some called “revolting” attacks. In French news outlets and on television, commentators denounced what they called the “Americanization” of French politics.

Aurélie Filippetti, a former minister of culture under the Socialist government of President François Hollande, wrote on Twitter that “what happened against” Mr. Griveaux was “disgusting.” She added, “How far will we go in shame and abomination?”

Mr. Villani, the dissident candidate, said on Twitter that the publication of sexual materials on Mr. Griveaux was “a serious threat to our democracy.”

Ms. Hidalgo, who is running for a second term, released a statement calling for a “respect of privacy and respect of individuals.” She added that Paris residents deserved “a dignified debate.”

Mr. Griveaux’s successor as government spokesman, Sibeth Ndiaye, denounced what she called “stink bombs” in “a lowdown campaign where there are no limits.”

How are FinTech Start-ups transforming our relationship with money?

Trans Athlete Chris Mosier on Qualifying for the Olympic Trials

Tesla Autopilot’s role in fatal 2018 crash will be decided this...

Lucy Augé is having a charity sale of her beautiful botanical...

Founder of French Charity Is Accused of Pattern of Abuse