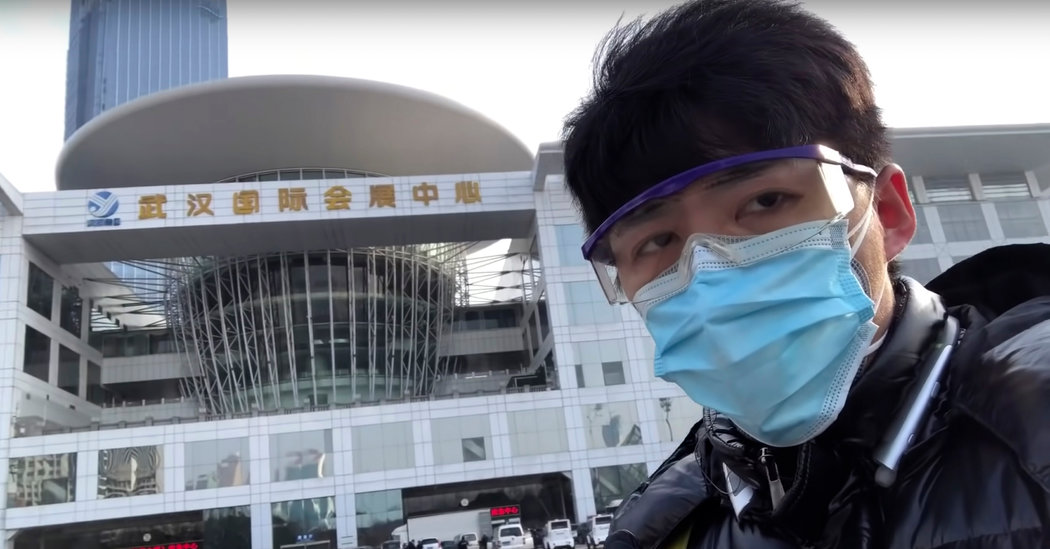 HONG KONG — The beige van squatted outside of a Wuhan hospital, its side and back doors ajar. Fang Bin, a local clothing salesman, peered inside as he walked past. He groaned: “So many dead.” He counted five, six, seven, eight body bags. “This is too many.”

That moment, in a 40-minute video about the coronavirus outbreak that has devastated China, propelled Mr. Fang to internet fame. Then, less than two weeks later, he disappeared.

Before their disappearances, Mr. Fang and Mr. Chen had recorded dozens of videos from Wuhan, streaming unfiltered and often heartbreaking images from the center of the outbreak. Long lines outside hospitals. Feeble patients. Agonized relatives.

The footage would have been striking anywhere. But it was especially so coming from inside China, where even mild criticism of the authorities is quickly scrubbed from the online record, and those responsible for it often punished.

The appetite for the videos reflects, in part, the shortage of independent news sources in China, where professional newspapers are tightly controlled by the authorities. Earlier this month, the state propaganda department deployed hundreds of journalists to reshape the narrative of the outbreak.

But the videos also reflected the growing call for free speech in China in recent weeks, as the coronavirus crisis has prompted criticism and introspection from unexpected corners across the country.

Several professional news organizations have produced incisive reports on the outbreak. A revolt against government censorship broke out on Chinese social media last week after the death of Li Wenliang, the Wuhan doctor who had tried to warn of the virus before officials had acknowledged an outbreak.

Mr. Fang’s and Mr. Chen’s videos were another manifestation of the dissatisfaction that the government’s handling of the outbreak has unleashed among ordinary Chinese citizens.

“When suddenly there’s a crisis, they want to have access to a wider array of content and reporting,” said Sarah Cook, who studies Chinese media at Freedom House, a pro-democracy research group based in the United States.

The disappearance of the two men also underscores that the ruling Communist Party has no intention of loosening its grip on free speech.

China’s leader, Xi Jinping, said last month that officials needed to “strengthen the guidance of public opinion.” While Chinese social media has overflowed with fear and grief, state propaganda outlets have emphasized Mr. Xi’s steady hand, framed the fight against the outbreak as a form of patriotism and shared upbeat videos of medical workers dancing.

More than 350 people across China have been punished for “spreading rumors” about the outbreak, according to Chinese Human Rights Defenders, an advocacy group.

Mr. Chen, a fast-talking, fresh-faced lawyer from eastern China, was already well-known online before the outbreak. He traveled to Hong Kong during the pro-democracy protests last year and disputed the Chinese authorities’ depiction of the demonstrators as a riotous mob.

The Beijing authorities summoned him back to the mainland and deleted his social media accounts, Mr. Chen told his followers later.

But when the coronavirus led officials to seal off Wuhan last month, he raced to the city of 11 million, citing his duty as a self-declared citizen journalist. “What sort of a journalist are you if you don’t dare rush to the front line?” he said.

In his videos, which drew millions of views on YouTube, Mr. Chen interviewed locals who had lost loved ones, filmed a woman breaking down as she waited for care and visited an exhibition center that had been converted into a quarantine center.

He was blocked from WeChat, a major Chinese social media app, for spreading rumors. But he was adamant that he shared only what he himself had seen or heard.

As time went on, Mr. Chen, usually energetic, began to show strain. “I am scared,” he said on Jan. 30. “In front of me is the virus. Behind me is China’s legal and administrative power.”

The authorities had contacted his parents to ask for his whereabouts, he said. He teared up suddenly. Then, his finger pointing at the camera, he blurted: “I’m not even scared of death. You think I’m scared of you, Communist Party?”

On Feb. 6, Mr. Chen’s friends lost contact with him. Xu Xiaodong, a prominent mixed martial arts practitioner and a friend of Mr. Chen, posted a video on Feb. 7 saying that Mr. Chen’s parents had been told that their son had been quarantined, though he had not shown symptoms of illness.

Unlike Mr. Chen, Mr. Fang, the clothing salesman, was fairly anonymous before the coronavirus outbreak. Much of his YouTube activity had involved producing enthusiastic videos about traditional Chinese clothing.

But as the outbreak escalated, he began sharing videos of Wuhan’s empty streets and crowded hospitals. They lacked the slickness of Mr. Chen’s dispatches, which were often subtitled and tightly edited. But, as with Mr. Chen’s videos, they showed a man growing increasingly desperate — and defiant.

On Feb. 2, Mr. Fang described how officials had confiscated his laptop and interrogated him about his footage of the body bags. On Feb. 4, he filmed a group of people outside his home, who said they were there to ask him questions. He turned them away, daring them to break down his door.

In his final videos, Mr. Fang turned explicitly political in a way rarely heard inside China, at least in public. Filming from inside his home — he said he was surrounded by plainclothes policemen — he railed against “greed for power” and “tyranny.”

His last video, on Feb. 9, was just 12 seconds long. It featured a scroll of paper with the words, “All citizens resist, hand power back to the people.”

Despite the worldwide audience for Mr. Fang’s and Mr. Chen’s videos, it is hard to know how much reach they had domestically, said Fang Kecheng, an assistant professor of journalism at the Chinese University of Hong Kong. Both men relied heavily on YouTube and Twitter, which are blocked in China.

But unlike the torrent of grief and anger online in response to the death of Dr. Li, news of Mr. Chen’s and Mr. Fang’s disappearances has been swiftly stamped out on Chinese social media. Their names returned almost no results on Weibo, China’s Twitter-like platform, on Friday.

Still, Ms. Cook said the power of Mr. Chen’s and Mr. Fang’s videos, as well as the reporting done by professional journalists in Wuhan, should not be underestimated.

She pointed to the Chinese authorities’ decision this week to loosen diagnostic requirements for coronavirus cases, leading to a significant jump in reported infections, as evidence of their impact.

That decision might not have come “if you didn’t have all these people in Wuhan sending out reports that what you’re hearing is an underestimate,” Ms. Cook said. “These very courageous individuals can, in unusual circumstances, push back and force the state’s hand.”

Mr. Fang, in one of his last videos, seemed struck by a similar sentiment. He thanked his viewers, who he said had been calling him nonstop to send support.

“A person, just an ordinary person, a silly person,” he said of himself, “who lifted the lid for a second.”

Instagram Rolls Out Option to Reply to Stories With GIFs

Iron Man dreams are closer to becoming a reality thanks to...

Her Grandmother Got the Coronavirus. Then So Did the Whole Family.