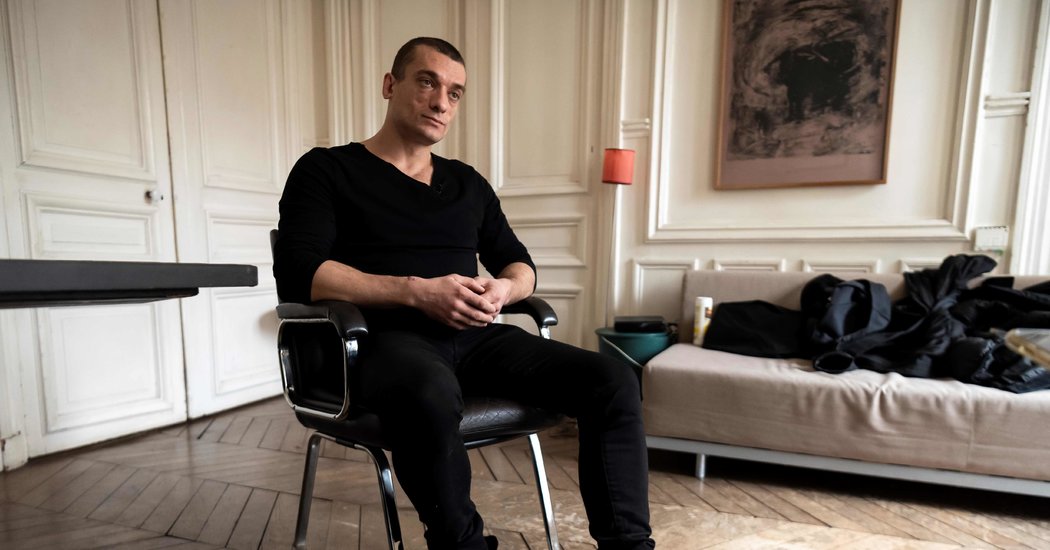 PARIS — A Russian performance artist who claimed responsibility for releasing sexual videos that brought down a high-profile candidate for Paris mayor last week has been detained by the police in a separate case from December, the prosecutor’s office said.

The artist, Pyotr Pavlensky, who received asylum in France in 2017, was questioned on Saturday at a police station in Paris over a case involving “violence with a weapon” on Dec. 31, the Paris prosecutor’s office said. French news outlets reported that Mr. Pavlensky was accused of drawing a knife during a dispute at a Paris apartment in which two people were injured.

The mayoral candidate, Benjamin Griveaux, a former French government spokesman, withdrew from the race on Friday, after the private text messages he is said to have sent to an unidentified woman emerged online Wednesday. In a videotaped statement, Mr. Griveaux did not directly cite a connection between the explicit videos and his withdrawal, but he described “defamatory statements, lies, anonymous attacks, the disclosure of stolen private conversations, as well as death threats.”

Mr. Pavlensky told the newspaper Libération that he had published the videos to expose Mr. Griveaux, a married father of three, as hypocritical because the candidate invoked “family values” and “always mentioned his wife and children as an example.”

The prosecutor’s office said that Mr. Griveaux filed a complaint on Saturday for invasion of his private life and that an investigation had been opened.

The circumstances surrounding his withdrawal from the race sent shock waves through the political establishment of a country that has a tradition of keeping the private lives of public servants out of view.

Mr. Griveaux was the candidate of President Emmanuel Macron’s centrist Republic on the Move party, which is searching for a quick replacement. The party said on Friday that it planned to name its new mayoral candidate this week. The two-round election begins in a month.

The mayor of Paris is a high-profile job that Mr. Macron’s party was counting to win. But Mr. Griveaux had been struggling, with polls showing him in third place behind Mayor Anne Hidalgo and a conservative candidate.

Another candidate with a national profile, the mathematician Cédric Villani, was ousted from Mr. Macron’s party after he turned down a personal request from the president to withdraw from the race and back Mr. Griveaux. French news outlets reported that party leaders met discreetly with Mr. Villani on Saturday, a possible sign of the breadth of its frantic search for a new candidate.

Mr. Pavlensky created a special site to post the explicit video material, believed to have been extracted from cellphone exchanges. He wrote on his Facebook page on Saturday that the French authorities had taken down the site, apologizing to followers.

He was quoted on Friday by the French broadcaster BFM-TV as saying that Mr. Griveaux was “a candidate who has lied to his electors” and “very dangerous” for Paris.

Mr. Pavlensky has had trouble with the law before. He was convicted in January 2019 of setting fire to a Bank of France branch and damaging its facade in 2017. He was sentenced to a year in prison, plus a two-year suspended sentence. The judge allowed him to walk free because he had already spent 11 months in pretrial detention.

He left Russia in 2017 after being told of rape accusations against him. While in Russia, he set a fire in front of the Russian federal security agency and nailed his scrotum to Red Square in Moscow, in what he said was a metaphor for Russian political apathy.

Mr. Pavlensky was granted asylum in France after fleeing Russia.

New Jersey Natives May Have A Very Strange Complaint About Birds...

This Drug May Cause Birth Defects. Japan’s Pushing It for Coronavirus.

Philip Leder, Who Helped Decipher the Genetic Code, Dies at 85

The ‘Knight Rider’ theme song played on the cello is the...

Leishman Cards 65 to Win at Torrey Pines as Rahm Falters

Brad Pitt Has A Message For College Grads, But His Hair...

To Beat the Virus, Colombia Tries Separating Men and Women

World Leaders Join to Pledge $8 Billion for Vaccine as U.S....