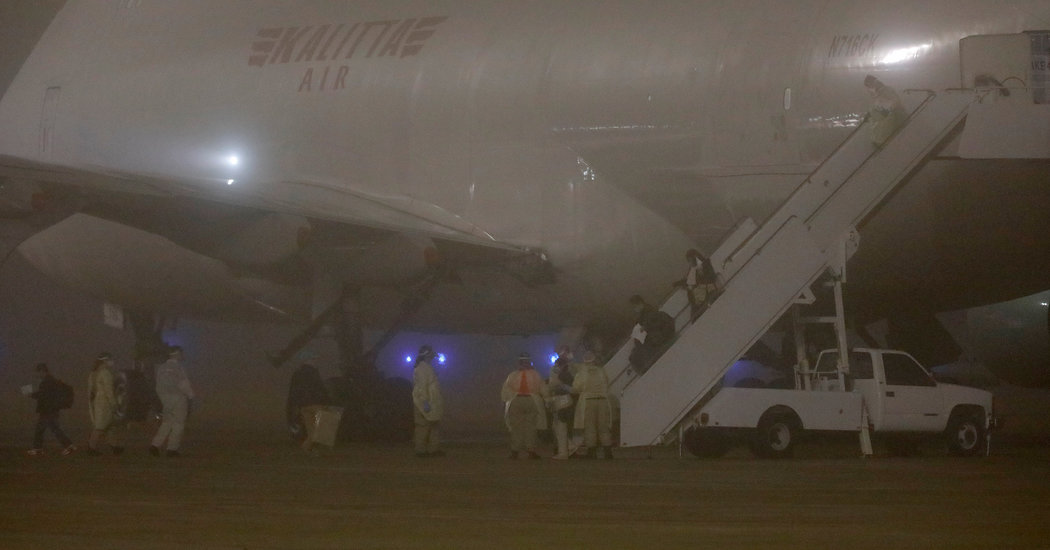 TOKYO — The ground rules were clear. A day before 328 Americans were to be whisked away from a contaminated cruise ship in Japan, the U.S. Embassy in Tokyo told passengers that no one infected with the coronavirus would be allowed to board charter flights to the United States.

But as the evacuees began filing onto reconfigured cargo planes early Monday for departures to military bases in California or Texas, some noticed a tented area in one of them that was separate from the rest of the cabin.

Then reality hit: After 12 days stuck on the cruise ship as more and more people tested positive for the virus, they would now be sharing a plane with those carrying the same pathogen they were desperate to escape.

“I didn’t know until we were in the air,” said Carol Montgomery, 67, a retired administrative assistant from San Clemente, Calif. “I saw an area of plastic sheeting and tape.”

While the planes were aloft, the State Department and the Department of Health and Human Services said in a joint statement that the results for 14 passengers who had been tested two or three days earlier came back positive just as they were boarding buses to the airport. After consultations with health experts, the U.S. government decided to let the infected evacuees, who were not yet exhibiting symptoms, board the flights.

The reversal was the latest chaotic turn in a two-week quarantine of the ship that has become an epidemiological nightmare.

Even as the Americans were flying home and countries like Australia, Canada and South Korea were preparing to evacuate their own citizens, the Japanese Health Ministry announced on Monday that 99 more cases had been confirmed on the cruise ship, bringing the total to 454.

Among them was the third Japanese public health official to contract the virus while tending to passengers and crew members aboard the ship, the Diamond Princess.

The unstinting rise in infections raised questions about how the Japanese authorities would handle the offloading of passengers in two days when the quarantine period is supposed to end. Health officials have already raised the possibility that the quarantine could be extended for some passengers.

“The quarantine on the ship ended up being an unprecedented failure,” said Eiji Kusumi, a doctor specializing in infectious diseases at Navitas Clinic in Tokyo. “We should learn from this lesson that a quarantine on a ship is impossible, and we should not repeat this in the future.”

The U.S. authorities had strongly encouraged American passengers to accept the offer of a flight out. Getting them off the ship took several hours as they were screened, their passports were checked and they were loaded onto buses that took them from the port of Yokohama to Haneda Airport in Tokyo.

The State Department said the infected passengers “were moved in the most expeditious and safe manner to a specialized containment area on the evacuation aircraft to isolate them in accordance with standard protocols.”

The American passengers were taken to either Travis Air Force Base in California or Joint Base San Antonio in Texas, and they will remain under quarantine for an additional 14 days.

When one of the planes landed in California, a line of officials from the military, the Centers for Disease Control and Prevention, and the Department of Homeland Security welcomed the passengers with banners that read “Welcome home.”

After being ushered through an isolation tent, they were assigned to apartments on the base. “They have flown in specialists from across the country,” said Sarah Arana, 52, a medical social worker from Paso Robles, Calif. “It’s a phenomenal amount of resources. I’m kind of blown away.”

Epidemiologists said U.S. officials had made a difficult decision to allow infected passengers onboard the charter flights.

“The degree of difficulty in getting someone sick home is much greater than repatriating people who are otherwise well and possibly incubating,” said Dr. Allen Cheng, an infectious disease specialist at Monash University in Melbourne, Australia.

Dr. Cheng added, “You don’t want to expose anyone on the plane who hadn’t otherwise been exposed before on the boat.”

Australia is planning to take approximately 200 passengers off the Diamond Princess on Wednesday. Dr. Cheng said that Australia had decided that “anyone who is sick or becomes sick in the next 48 hours will stay in Japan and stay in the hospital.”

With Australia and other countries preparing to help transport their citizens off the boat, the captain told the more than 2,000 people still on board that the Japanese health authorities could swab everyone for the coronavirus by the end of Monday and begin letting guests leave the ship on Wednesday.

“This disembarkation will be an ongoing process” until Feb. 22, the captain said in an onboard announcement.

The captain said the cruise line was “coordinating closely with your embassies to understand the arrangements for you once you are cleared from the quarantine on the Diamond Princess and how we can best support you.”

In a briefing on Monday, Shigeru Omi, president of the Japan Community Healthcare Organization, said that Japan had made the right decision to put the ship in quarantine based on the information available when the ship arrived in Yokohama on Feb. 3. “At that time, the international community was trying to contain the virus,” Mr. Omi said.

According to the Japanese Health Ministry, at least 55 Americans on the ship were infected with the coronavirus. Many of them remain in hospitals around Japan.

John Haering, 63, a retired operations manager for Union Pacific Railroad who lives in Tooele, Utah, was taken to a hospital in Chiba Prefecture last week with a fever and tested positive for the virus. He said he felt stranded as he lay in an isolation room.

His wife, Melanie, left on one of the charter flights. “I’m happy for her that she got out of here and that she’s going to get some attention in the U.S.,” said Mr. Haering, who retired in November and was about a third of the way through a six-month trip around the world. “But at the same time I’m sad. You feel that loss of somebody leaving.”

Mr. Haering, who said that he no longer had any symptoms or a fever but that a CT scan showed signs of pneumonia, said he was not sure how much longer he would have to stay.

“They did swab me today again, and I’ll get my test back tomorrow,” he said. “I asked the doctor if the swab shows that I’m negative, and he just shook his head and said, ‘I don’t know.’ There’s a lot of stuff that they don’t know.”

He received a call and a follow-up email urging him to get in touch with the cruise ship company for further information about how he will get home.

“It’s very scary,” he said. “It feels like a little bit of abandonment.”

The spread of the virus on the ship was illustrated by one extended family.

Tung Pi Lee, 79, a retired physician, was left in a Tokyo hospital with a coronavirus infection while his wife, Angela, flew to California on one of the charter flights. Several of her siblings and their spouses were among the 14 infected passengers who flew home. Two were taken to Nebraska, and another was in California for treatment.

“I am glad for my aunts and uncles to be in the U.S. and to be receiving treatment here,” said JoAnn LaRoche Lee, one of Mr. Lee’s daughters. “Had they been left in Japan, I wonder what would have happened to them.”

Trying to coordinate her father’s care in Tokyo with her siblings in the United States, she said, “feels like a never-ending nightmare.”

Lenovo is building another standalone VR headset, but it’s not for...

For Black NASCAR Fans, Change Would Mean Feeling at Ease at...

In This Coronavirus Wave, China Tries Something New: Restraint