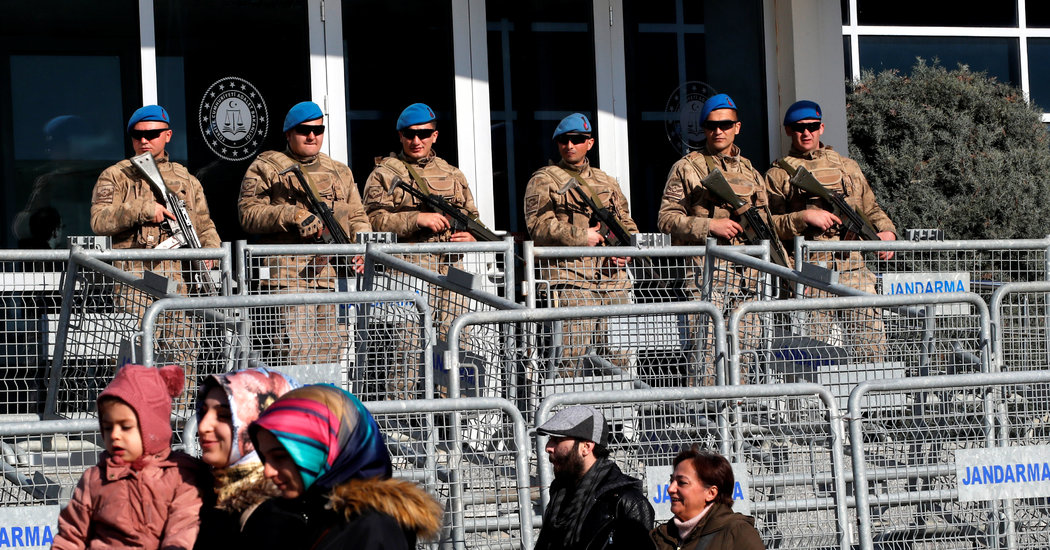 SILIVRI, Turkey — A Turkish court ordered a prominent philanthropist, Osman Kavala, acquitted of all charges and released from prison, one of several surprising verdicts on Tuesday in an important human rights trial that had been widely criticized as unjust.

Sixteen members of Turkish civil society, including Mr. Kavala, had faced charges in a case seen as a litmus test of popular opposition to the increasingly authoritarian rule of President Recep Tayyip Erdogan and the tightly controlled justice system.

Nine people in total were acquitted on Tuesday, and arrest warrants were lifted for the remaining seven defendants, on the condition that they appear in court. They have left the country and will be tried separately.

Charged with trying to overthrow the government by force, the defendants faced trial for participating in the 2013 Taksim Square protests, when demonstrators occupied Istanbul’s central square to halt the construction of a shopping mall in one of the city’s few parks.

The court, packed with friends and supporters of the defendants, erupted into applause and cheers at the culmination of a trial that has been seen as one of most important in Turkey. Amnesty International, in a statement ahead of the trial, said the outcome “will show the rest of the world whether respect for human rights has any part to play in the Turkish justice system.”

Mr. Kavala, who has been in jail for over two years, faced a life sentence in solitary confinement without parole, and was met with applause from the public when he was brought into the court. The prosecutor had demanded the same “aggravated life” sentence for two more defendants, an architect, Mucella Yapici, and a child development specialist, Yigit Aksakoglu, and sentences of up to 20 years for others.

Mr. Kavala, 63, entered the courthouse on Tuesday carrying a blue plastic bag. He raised his hand acknowledging the applause from the public gallery, but did not look around. He stooped slightly to bend over the microphone, referring only to a ruling by the European Court of Human Rights, which he said had found that there was no reason to suspect that he had committed a crime.

The case was part of a yearslong crackdown by the government of President Recep Tayyip Erdogan, after a bloody coup attempt against him in 2016. Tens of thousands of people have been detained and put on trial, many of them with little connection to the coup.

The defendants in the Taksim Square case were charged in 2018, five years after the initial protests. Mr. Erdogan, who personally supported the development project, saw the protests as a direct challenge to his rule and had them crushed with riot police and tear gas.

But rights organizations have criticized the prosecution as lacking solid evidence and using arguments based on conspiracy theories. Ms. Yapici, who is a member of Taksim Solidarity, a group that campaigns on urban development issues, was acquitted in an earlier trial for her role in the protests.

“We have seen this movie before,” one of the defendants, Can Atalay, a lawyer and member of Taksim Solidarity, posted on Twitter over the weekend. “The evidence is vague, witnesses are controversial, and the verdict is pre-ordered. They trashed the law.”

Another defendant, Tayfun Kahraman, who is an urban planner at the Istanbul mayor’s office, told an opposition channel, Halk TV, “We are prosecuted because we raised the demand of democratic rights.”

“Actually millions of people are on trial today,” he added. “The ones who took to the streets in 80 provinces are on trial. Today in Turkey democracy is on trial.”

Defense lawyers have protested that they were not given the transcripts of phone calls used as evidence in the trial and were not permitted to question a prosecution witness.

Hundreds of friends and supporters of the defendants turned out to attend the trial, filling first the seats and then the corridors of the high security courthouse. Armed paramilitary police officers stood guard outside.

The newly elected mayor of Istanbul, Ekrem Imamoglu, who defeated Mr. Erdogan’s candidate in a marathon election battle last year, voiced support for the defendants ahead of the trial, saying that he had also attended the Taksim Square protests.

The rights organization Amnesty International had accused the Turkish government of trying to rush through a verdict to avoid having to release Mr. Kavala, after the European Court of Human Rights ruled that extended pretrial detention violated his rights.

“It is time for Turkey to end the relentless crackdown on dissenting voices,” the statement said. “Osman Kavala must be immediately released from prison and all defendants acquitted.”

Many in China Wear Them, but Do Masks Block Coronavirus?

‘There Are No Viruses Here’: Leader of Belarus Scoffs at Lockdowns

Coronavirus Turns a Spanish Sea Delicacy Back Into Daily Fare

Puzzles and Potato Goulash: How Energy Workers Keep Lights On in...