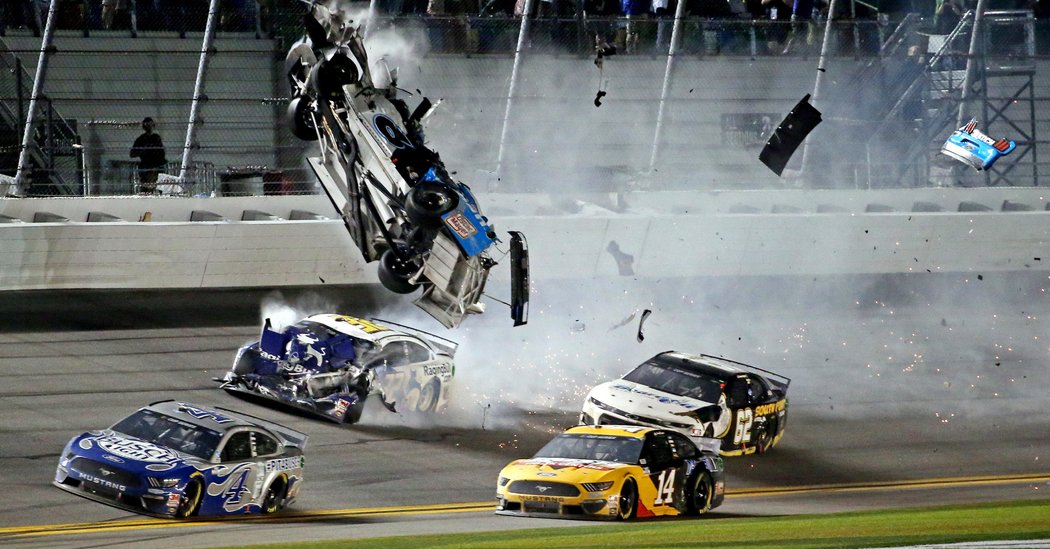 DAYTONA BEACH, Fla. — Denny Hamlin earned his second straight Daytona 500 victory on Monday, but the result was quickly overshadowed by concern for Ryan Newman after he was involved in a fiery wreck near the finish line.

Newman was trying to hold off Hamlin and Ryan Blaney less than 100 yards from the finish when Blaney’s car bumped his and sent him careening into the wall. Newman’s car lifted into the air and flipped before crossing the finish line on its roof amid sparks and flames.

Here is the final lap of the Daytona 500 in which Ryan Newman’s car was flipped at the line.

We will continue to keep you updated on his status as we learn more. pic.twitter.com/qkEwQBpoP0

Newman was removed from his mangled car by the track’s emergency crew and taken by ambulance to Halifax Medical Center. Hours after the race’s finish, Newman’s team, Roush Fenway Racing, said in a statement that he was in serious condition but that his injuries were “not life-threatening.”

His car sustained significant damage to its protective roll cage, but it appeared the structure had held up sufficiently to give Newman some protection.

Hamlin bypassed the wreck to win his third Daytona 500 over all, but the severity of Newman’s crash created a somber atmosphere after the race as fans and competitors offered support at the track and on social media.

“It’s hard to celebrate at a time like this,” Hamlin said in a subdued ceremony in Victory Lane.

The owner of Hamlin’s team, Joe Gibbs, apologized to fans for their postrace celebration. “We did not know the severity of Ryan’s injuries at that time,” he said.

Newman, a 42-year-old driver from South Bend, Ind., appeared to be on the verge of his second Daytona 500 victory after having won in 2008. But on the final lap, Blaney’s car caught Newman’s rear bumper and caused him to lose control.

Hamlin surged into the lead after the crash, and Blaney finished in second, followed by Newman’s teammate Chris Buescher. Hamlin’s margin of victory, less than a foot, was the second smallest in Daytona 500 history.

“I liked the position I was in,” Hamlin said of the beginning of the final lap. “But then Newman got a big push from Blaney and went sailing past me. I still thought I had a chance. I didn’t think the race was over, and then I got a big run to the finish.”

Blaney said he was struggling to maintain control as he pushed Newman toward the finish line. But Newman’s car spun to the right, slammed into the wall and then was smashed into by the trailing car of Corey LaJoie.

“That is the worst-case scenario,” LaJoie said. “I had nowhere to go but into smoke.”

Blaney was momentarily in the lead, but Hamlin just managed to catch him at the line.

“You always race to win,” Hamlin said. “But you never want to see that.”

The race finished about 28 hours after it began on Sunday afternoon with a command to start engines from President Trump. A series of rainstorms caused a delay after several laps, and the rest of the race was eventually postponed until Monday. It was only the second time in the race’s 62-year history that it had been delayed until the next day.

Just 50 miles of the scheduled 500 miles were logged on Sunday. When the race was restarted at 4 p.m. on Monday, the 40-car field managed to run fairly cleanly for much of the race. But in the final 40 miles, a series of major wrecks took out half the competitors.

The messes forced officials to red-flag the race to a stop, to clean up the track and reset the field.

The crash involving the most cars started when Joey Logano pushed Aric Almirola into the back of Brad Keselowski, who had led for 75 miles. Nearly a dozen cars subsequently piled into the spinning cars.

The race got up and running again, and the leaders were about five miles from the finish when Ross Chastain lost control while making a move for the lead and spun into Ryan Preece, Logano and several other contenders. The race was later delayed when three more cars slammed into each other.

That forced the race into overtime, with Hamlin’s Toyota leading a quintet of Fords, with two laps to go. A second crash also occurred on the final lap, well behind the leaders, but officials declined to bring out a yellow flag that would have slowed the field and sealed Hamlin’s place in front. So the race to the final flag continued at full speed.

Tennis Tours Hope to Salvage Their Seasons. It’s Not Getting Easier.

Big Ten Will Play Fall Sports Only Within Conference, if at All

Transgender Man in U.K. Loses Appeal to Be Listed as Father

Black is the new orange for OnePlus Concept One

IBM stops all domestic travel for internal meetings due to coronavirus

America Dominates Olympic Basketball, but What About ‘3×3’?

The N.B.A. All-Star Game Gets Major Changes, and a Kobe Tribute