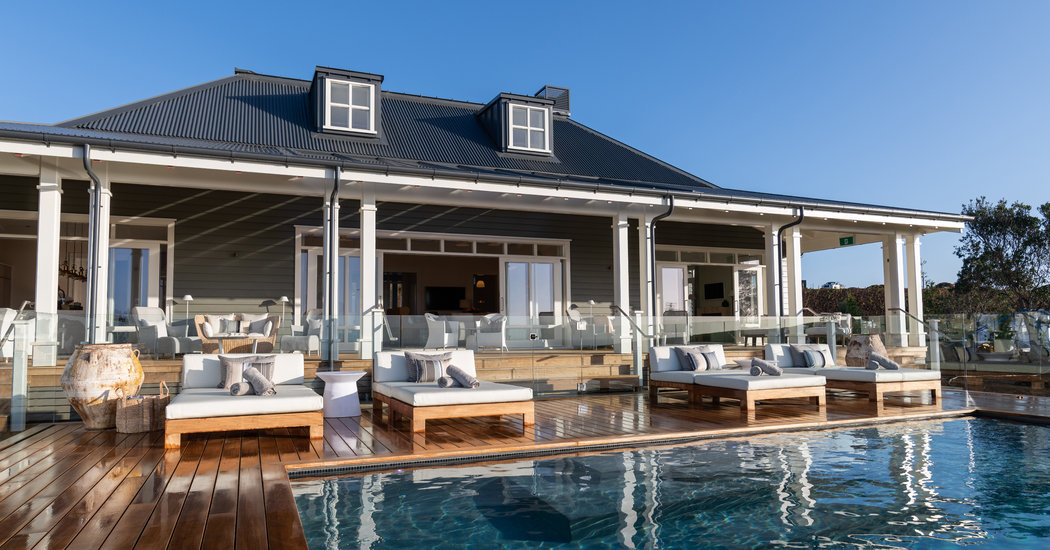 Julian Robertson’s three new homes on New Zealand’s North Island are a matter of practicality. The co-founder, chairman and chief executive of the investment firm Tiger Management needs the residences for his growing family, which now includes his three sons, their wives and his nine grandchildren.

When Mr. Robertson first built a vacation house on North Island more than a decade ago, he imagined his clan all staying there together under one roof whenever they visited. “It’s a destination I’ve long loved and enjoying sharing with my loved ones,” he said.

That first home, along with the new ones, are on the same 6,000 acres of farmland in the Bay of Islands as Mr. Robertson’s upscale hotel, the Lodge at Kauri Cliffs.

The property is part of Robertson Lodges, a trio of hotels in New Zealand that also includes the Farm at Cape Kidnappers near Napier and Matakauri Lodge, on the South Island.

As the Robertson family grew, however, it was clear that the two-bedroom residence was too small.

The family trips usually coincided over the December holidays and in March, when his grandchildren of school age had spring break.

Mr. Robertson’s middle son, Jay, the chief executive of Robertson Lodges, recalled the moment several years ago at a family dinner at Kauri Cliffs when the idea for the three new residences was born. “We were in the middle of the meal when someone brought up how it might make more sense for each son and his family to have their own place,” he said.

At the time, Mr. Robertson had already hired an architect based in Lakeland, Fla., Wade Setliff, who had worked on that initial residence, as well as on The Lodge at Kauri Cliffs, to design a home big enough for his family, grandchildren and all.

“Dad had this vision of us together, but he realized that this was a better, more realistic option,” Jay Robertson said. “We changed course and told Wade that we wanted three homes, instead, that had to be identical. Dad wanted the same setup for all of us, so it didn’t seem like one family had something better or different than another.”

With large windows that have sweeping panoramas of the Pacific Ocean and the Cavalli Islands, the single-story, four-bedroom residences are built with native timber weatherboards. Each home is almost 4,000 square feet. The family declined to say how much each house cost to build.

Mr. Setliff described them as not overly contemporary but not old-fashioned, either. “The aesthetic is clean and about maximizing the views,” he said. “They’re inspired by the colonial workers’ cottages that were all over New Zealand in the 19th and 20th centuries.”

And they definitely have children in mind. “When I was designing them, I visualized the Robertson grandkids running around inside and outside and having many happy times,” Mr. Setliff said.

Among his design features are high ceilings, blond oak floors, large kitchens with islands, sliding doors that lead to outdoor spaces for lounging and dining, and a 25-foot-long saltwater pool.

Each home has a small room near the kitchen with hooks and baskets where the Robertsons can throw their pool towels and wet shoes as soon as they come inside.

For the décor and furnishings, the family looked to another past relationship: Virginia Fisher, an Auckland-based interior designer who had worked on The Lodge at Kauri Cliffs in collaboration with Mr. Robertson’s wife, Josie Robertson, who died in 2010.

“I’ve had a long and happy relationship with the family, and I jumped at the chance to work with them again,” Ms. Fisher said.

She wanted the homes to be relaxed and comfortable. “The idea was that you should be able to put your feet up and not worry about anything breaking,” she said.

To achieve that, she made sure the family rooms and outdoor spaces were filled with oversize couches and lounge chairs in beige tones — the pieces were mostly from furniture makers in New Zealand. Accents like pillows and handmade rugs from India and Tibet are brighter but still in soft colors, such as muted blues, grays and greens.

More unique touches include the hanging brass lights over the kitchen islands that are originally from ships in India in the last century. “I had them repolished,” Ms. Fisher said.

Every home also has a series of 19th-century lithographs featuring canoes and other small vessels that convey a sense of the area’s maritime history.

Since the Robertsons all live in the United States and usually visit New Zealand a few times a year for a few weeks at a time, Mr. Robertson said, he plans to rent the homes whenever they’re not there for $89,000, or 139,000 New Zealand dollars, per home per week. (The first two houses are complete, and the third will be done this year.)

“They’re for my family, but I want to share them with families who travel to New Zealand and want a house to stay in where they can relax and have happy memories,” Mr. Robertson said.

Poor and Desperate, Pakistani Hindus Accept Islam to Get By

When a Drug Study Abruptly Ends, Volunteers Are Left to Cope

Microsoft Surface Duo: All you need to know about the upcoming...

For Indian Women, the Coronavirus Economy Is a Devastating Setback