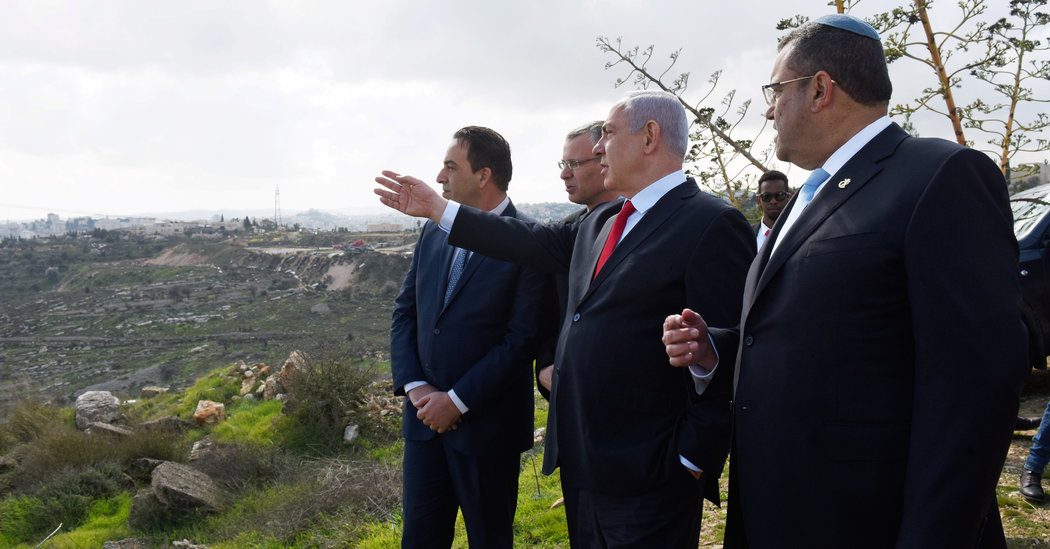 Prime Minister Benjamin Netanyahu of Israel announced plans on Thursday to build thousands of new housing units in contested East Jerusalem, which critics say could doom any prospect of a deal with the Palestinians.

It is likely to be years before any of the 6,200 units would be built, but the announcement, 11 days before a national election, was widely seen as an effort by Mr. Netanyahu to solidify support among his right-wing base.

The homes are slated for two areas in East Jerusalem, which was captured by Israel from Jordan in the 1967 war and has been long demanded by Palestinians as the capital of a future independent state. Israel unilaterally annexed the area as part of its capital, a move not recognized by most countries but endorsed by President Trump’s Middle East plan.

“We are joining up all the parts of unified Jerusalem,” Mr. Netanyahu announced in a video shot against the backdrop of Har Homa, one of the two neighborhoods where the new homes will be built.

Mr. Netanyahu said his office would soon begin the bidding process for the construction of 1,000 of the new units in the other neighborhood, Givat Hamatos, jump-starting development in an area where nothing has been built for years because of international pressure.

Mr. Netanyahu said he had now “removed all the limitations.”

Supporters of the two-state solution to the Israeli-Palestinian conflict have long warned that construction in Givat Hamatos would choke off the last open area connecting East Jerusalem with the Palestinian city of Bethlehem and the southern West Bank.

“Ongoing Israeli settlement announcements represent the implementation of the Trump plan, which requires urgent international action to deter both Israel and the U.S. from their continued violations of international law and order,” he said in a statement.

The plans announced by Mr. Netanyahu call for 4,000 new homes in Givat Hamatos. They would include 1,000 units for Arab residents, potentially to be built on land privately owned by Palestinians as an extension of a nearby Palestinian neighborhood, Beit Safafa.

With that, Mr. Netanyahu said he was fostering “coexistence and peace” in Jerusalem.

The other 2,200 units would expand Har Homa, in southeast Jerusalem, which he founded in the late 1990s over strong international objections. Those units are in a preliminary planning stage and probably years away from construction.

The Trump administration’s plan, released last month, recognizes Israeli sovereignty over a unified Jerusalem, from west to east, relegating any Palestinian capital to a few disconnected and outlying areas. Most countries consider East Jerusalem to be occupied territory and Israeli settlements there to violate international law.

The Palestinian leadership has rejected the plan as a one-sided proposal that rewards Israel’s occupation.

Aviv Tatarsky of Ir Amim, a group advocating an equitable arrangement between Israelis and Palestinians in Jerusalem, said that creating Israeli contiguity in the city and cutting the Palestinian neighborhoods off from the West Bank was the goal of Har Homa and Givat Hamatos in the first place.

Thursday’s declaration, he said, was “one of the first manifestations of how destructive” the Trump administration’s plan was.

Peace Now, another Israeli anti-settlement group, said the plans amounted to “state suicide” by preventing any viable two-state option for the future.

“If nobody stops it, then in a year or two they will begin to build” in Givat Hamatos, said Hagit Ofran of Peace Now’s Settlement Watch department.

Mr. Netanyahu, Israel’s longest-serving prime minister, has been in office continuously since 2009 but is now fighting for his political future. He was indicted in November on charges of bribery, fraud and breach of trust in three graft cases.

Two earlier elections, in April and September 2019, ended inconclusively, with neither Mr. Netanyahu nor his chief opponent, Benny Gantz, of the centrist Blue and White party, able to muster the majority needed to form a viable government. An unprecedented third ballot in a year is set for March 2.

Amid the political stalemate, Mr. Netanyahu and his conservative Likud party are competing with parties further to the right for every possible vote. He has come under increasing pressure from right-wing and settler groups for failing to build in Jerusalem.

Immediately after the rollout of the Trump administration’s plan, Mr. Netanyahu’s government promised to begin the process of extending Israeli sovereignty over substantial parts of the occupied West Bank, as the Trump plan envisaged, within days.

But the White House put the brakes on, making clear that it would not endorse any such move before the Israeli elections.

How to take a screenshot on the Samsung Galaxy S20, including...

What Is Britain Without the Pub?

Is This the Most Virus-Proof Job in the World?

A Conversation With the Ultrarunner Yassine Diboun

Snap rolling out ‘Here For You’ mental health tool early with...